Archive for the ‘Awards’ Category 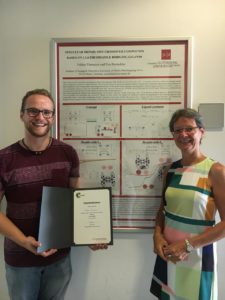 The conference took place from 16-20th July in Namur, Belgium, and is jointly organised by the University of Namur, Wuhan University of Technology and Université Catholique de Louvain.

Well done to Fabian from everyone at Chemical Science!

The 16th Symposium for Host-Guest and Supramolecular Chemistry was held on 2 – 3 June 2018 at the Tokyo University of Science in Japan.

This annual symposium covers all aspects of the chemical sciences related to molecular recognition and supramolecular chemistry, including the discussion of topics around intermolecular interactions. The event included a special lecture by Dr Shigeki Sasaki and invited lectures by Dr Takashi Hayashi and Dr Katsuhiko Ariga.

Chemical Science is delighted to announce that the Chemical Science poster prize was awarded to Ayaka Yoshioka for a poster entitled ‘Hydrogen-bonding Net-Tubes based on Ring-fused malonamides: Guest Dependence of Tubular Structure Formation and Guest Adsorption/Desorption Assembly’.

Well done Ayaka from everyone at Chemical Science! 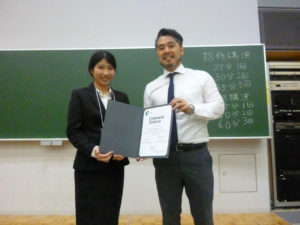 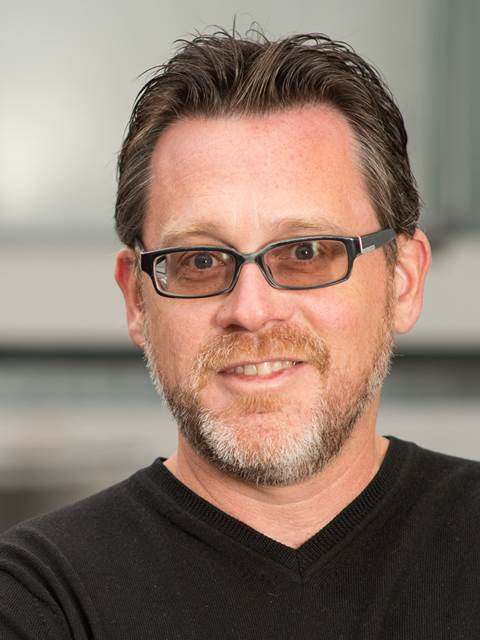 The Host Guest Supramolecular Chemistry Annual Symposium (website in Japanese) is an annual event that is organized by the Association of Research for Host-Guest and Supramolecular Chemistry. This year, the 15th occurrence of this symposium took place at the Ritsumeikan University on 3-4 June 2017. The event was attended by 230 people and counted 39 talks and 128 poster presentations.

The Chemical Science, ChemComm and Organic & Biomolecular Chemistry poster prizes were delivered to the 3 most outstanding poster presentations, along with 7 other poster prizes.

Nobuhiko Nishitani from Kyoto University was awarded the Chemical Science award for their poster titled: STM Observation of Cooperative Self-Assembly at the Liquid/Graphite Interface: Influence of Intercolumnar Interactions on Domain Size and Shape

Tsuyoshi Mashima from Osaka University was awarded the ChemComm award for their poster titled: Construction of Zn-substituted Hexameric Hemoprotein with Multiple Photosensitizers and Evaluation of its Light Harvesting Function

Tomokuni Kai from Tokyo Institute of Technology was awarded the Organic & Biomolecular Chemistry award for their poster titled: Polyaromatic Micelles: Emission Enhancement of Eu(III)-complexes in Water upon Encapsulation 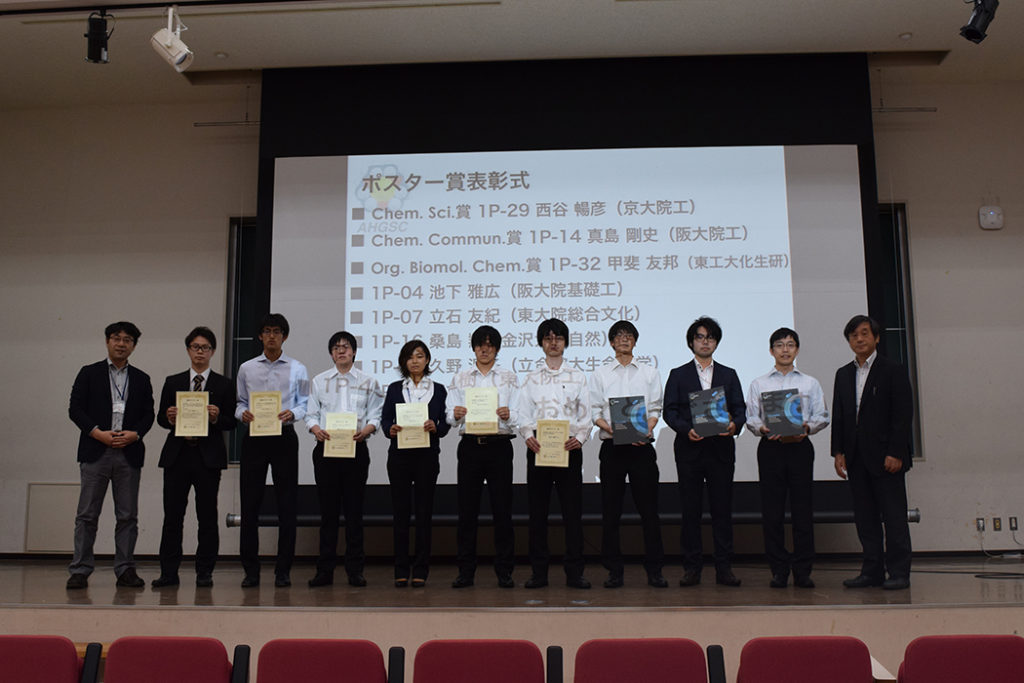 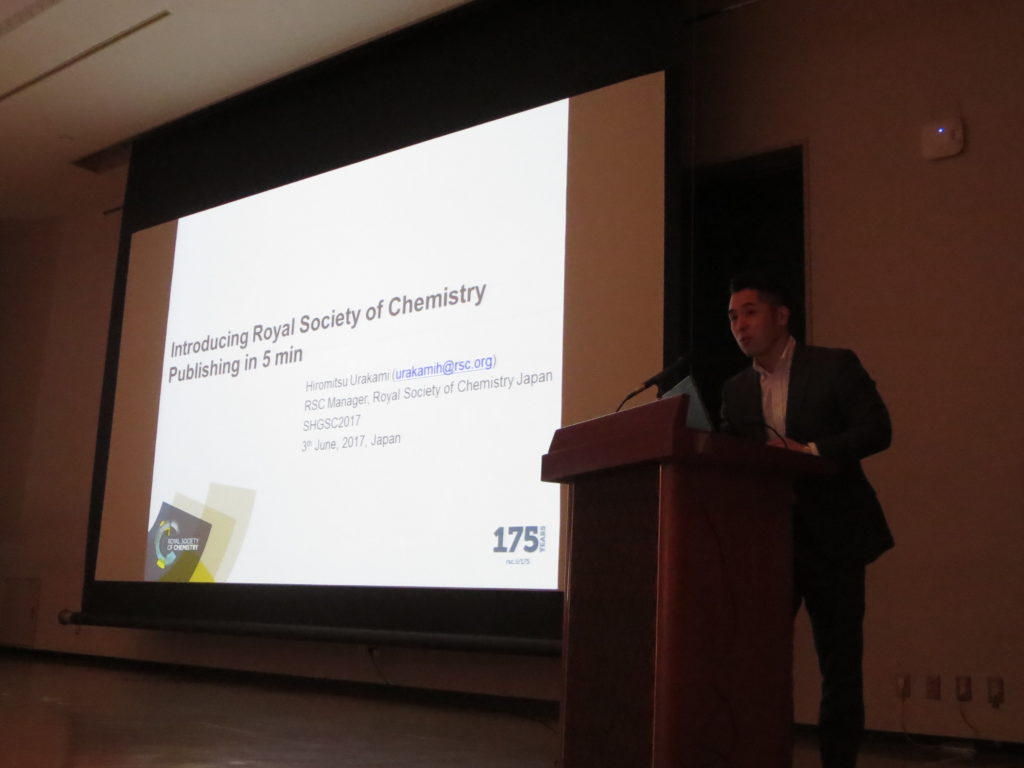 The UCCS is a symposium for current graduate students and postdoctoral researchers in all fields of chemistry from all campuses of the University of California. The whole conference is organised by graduate students and postdocs from the UC campuses. The first UCCS meeting was held in March 2016, at the Lake Arrowhead conference center in Lake Arrowhead. 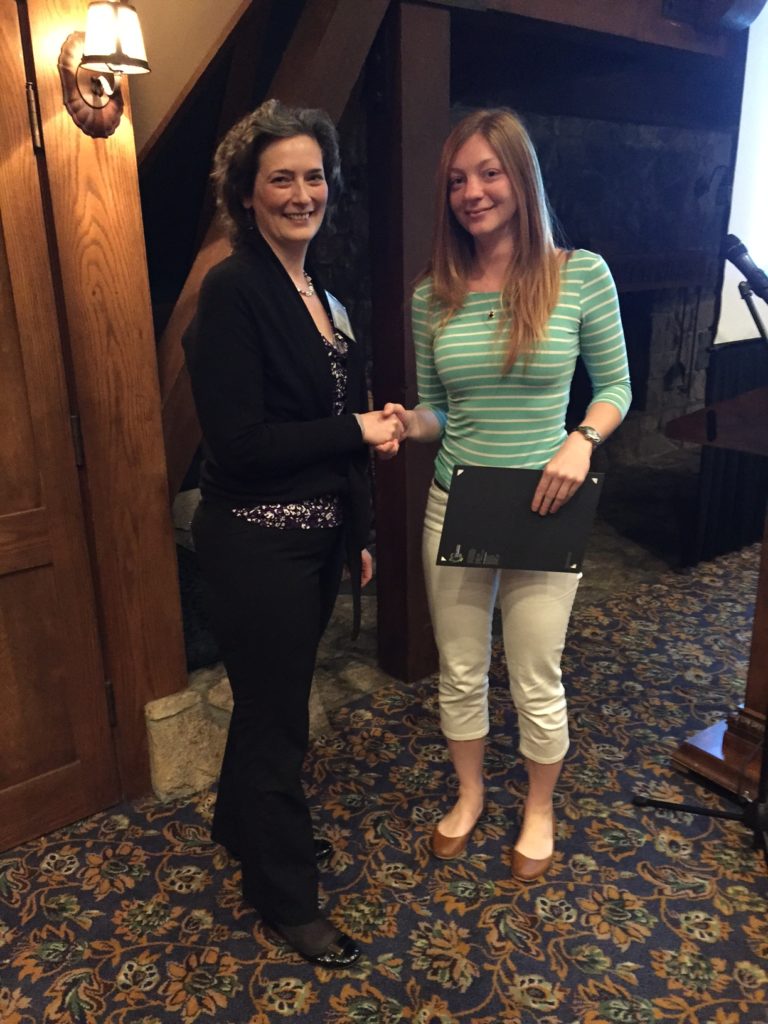 To celebrate International Women′s Day on the 8th March 2017, IUPAC was pleased to announce the awardees of the IUPAC 2017 Distinguished Women in Chemistry or Chemical Engineering:

This award aims to acknowledge and promote the work of women chemists and chemical engineers throughout the world. All awardees have been selected based on excellence in basic or applied research, distinguished accomplishments in teaching or education, or demonstrated leadership or managerial excellence in the chemical sciences.

The award ceremony will take place during the IUPAC World Chemistry Congress in São Paulo, Brazil in July, coinciding with a special symposium on Women in Chemistry.

We are delighted to announce that Professor Jihong Yu, an Associate Editor for Chemical Science, has been awarded this prize. Congratulations!

Professor Yu is a Fellow of the Royal Society of Chemistry, Secretary-General of the International Zeolite Association (IZA) and in 2015 was officially elected as Academician by the Chinese Academy of Sciences.

We are delighted to announce the  winner of the 2015 Chemical Science Lectureship – Professor Yamuna Krishnan, University of Chicago. 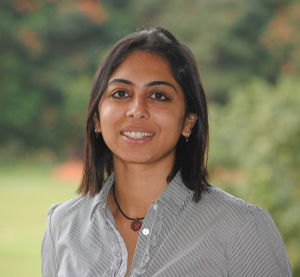 Yamuna is a Professor and Brain Research Foundation Fellow of Chemistry and the Grossman Institute of Neuroscience at the University of Chicago. She received her PhD from the Indian Institute of Science, Bangalore and pursued her postdoctoral studies as an 1851 Research Fellow at the University of Cambridge, UK, with Shankar Balasubramanian. She set up her group at the NCBS, Bangalore, in 2005 focusing on intelligent DNA-based molecular devices to interrogate cellular processes.

The Chemical Science Lectureship recognises sustained excellence in research by a mid-career scientist within the chemical sciences.
Previous recipients of this lectureship include Kevan Shokat (UC San Francisco; 2013) and Gregory Fu (Caltech; 2014).

Yamuna will give her first Chemical Science Lectureship talk on “Synthetic DNA devices quantitate protein activity in living organisms” at this weeks’ ISACS19: Challenges in Organic Chemistry conference at University of California, Irvine.

Her second talk will be on  “DNA-based Fluorescent Reporters for Live Imaging”. We hope you can join her:

Check out Yamuna’s recent article in Chemical Science which is available Open Access: 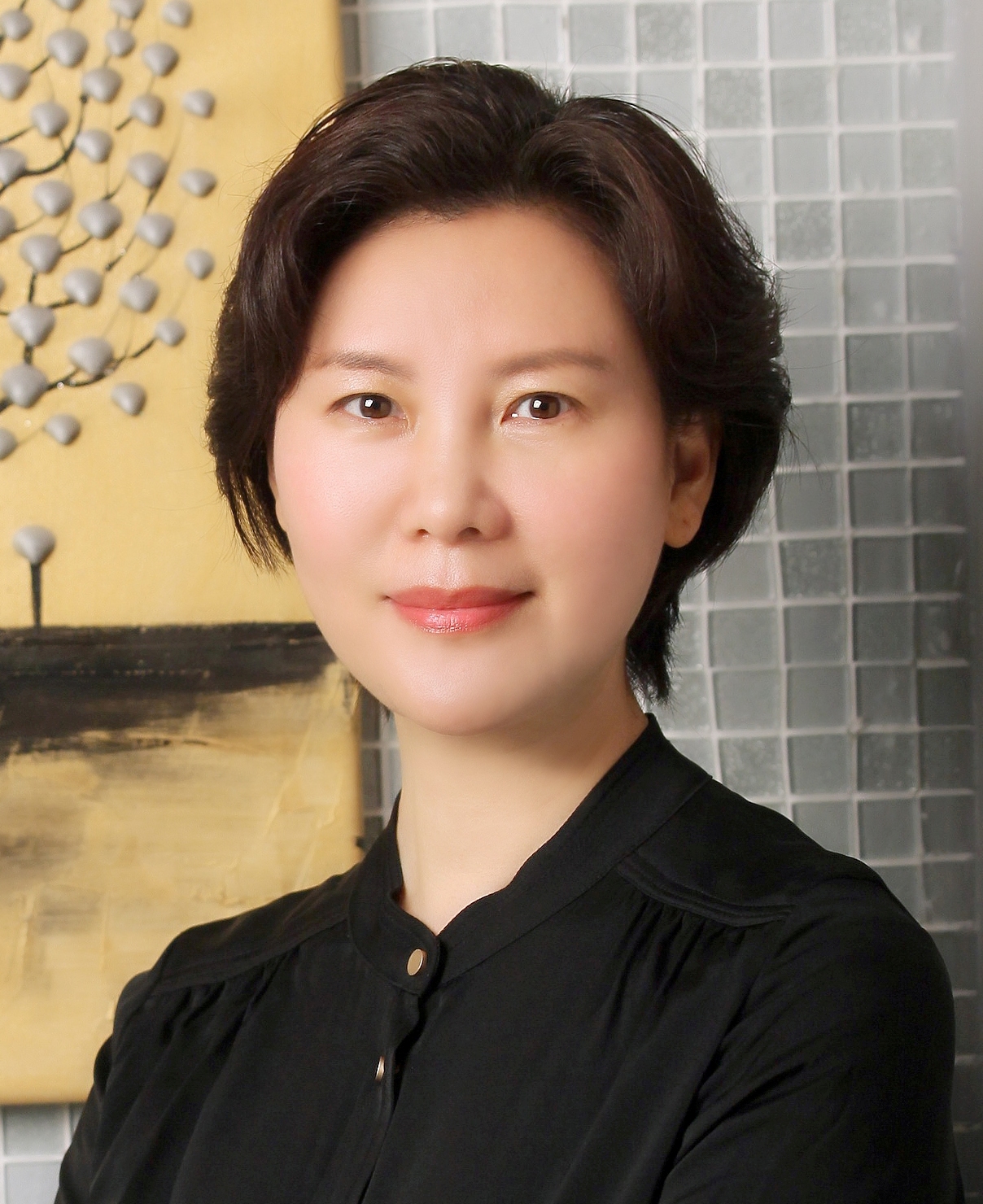 Chem Sci Advisory Board member David Spring is a Corday-Morgan Prize winner for his contributions to chemistry-driven drug discovery through his work in diversity-oriented synthesis and chemical biology.

Chem Sci Associate Editor David Leigh has won the Pedler Award for his pioneering work on the biologically inspired design and synthesis of artificial molecular machines.

You can access papers by other 2014 RSC Prize and Award Winners for free* for a limited time. A full list of winners and more information about RSC Prizes and Awards can be found at: www.rsc.org/awards. 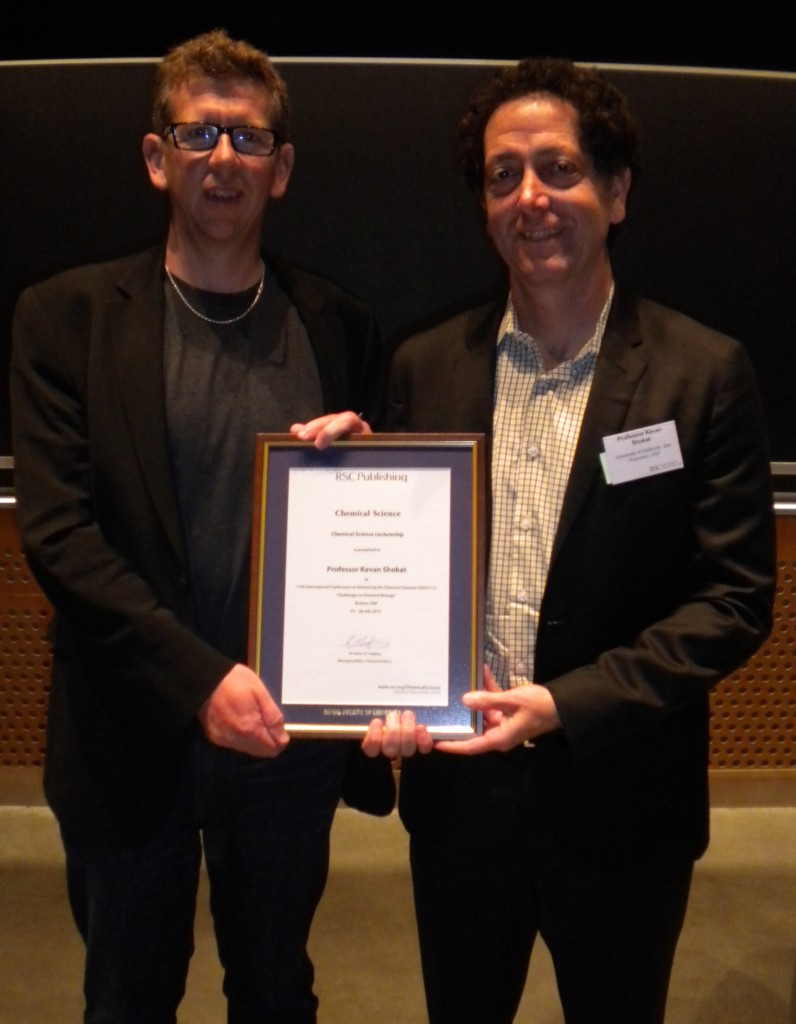