A single molecule that behaves like a powerful magnet could help chemists determine the structure of many other molecules. Researchers based in Italy and Brazil describe the development and potential of their unusually powerful Nuclear Magnetic Resonance (NMR) shift agent in the open access journal Chemical Science.

NMR uses a strong magnetic field to split the spin levels of the nuclei at the centre of some atoms. Monitoring the splitting can reveal the chemical environment surrounding individual atoms, allowing the structure of entire molecules, including large biological macromolecules to be determined.

NMR is based on the same physical principles as medical MRI imaging, but instead of generating images of bodies it creates graphical read-outs of atomic interactions that can be readily deciphered by experts. It has been a fundamental tool of chemistry research since long before the widespread application of MRI imaging.

One problem, however, is that the signals from atoms in large molecules can overlap and interfere in ways that blur the data. This can be resolved by introducing a tiny magnetic tag into a region of interest within a large molecule. The magnetism of the tag shifts the signals from nearby atoms in a predictable way, separating them out from signals from other regions that are not of immediate interest.

The tags are called shift agents and many are available, but researchers are seeking more powerful and effective shift agents to make NMR signals ever clearer and allow them to reveal new details of molecular structure within larger molecules.

The researchers in Italy and Brazil found inspiration for their new shift agent in an unusual place – chemicals used in research towards quantum technologies.

“By searching molecular materials designed for the miniaturisation of information storage and quantum technologies, we have identified and re-designed a molecule that shifts the NMR signals of the neighbouring atoms twice as much as the currently used molecules,” says researcher Roberta Sessoli at the University of Florence. Sessoli and her colleagues in Italy collaborated with researchers at the Federal University of Parana, Brazil.

The molecule they devised has a cage-like arrangement of organic (carbon-based) chemical groups holding an atom of the rare-earth element dysprosium at its centre. It was produced by a relatively simple chemical modification that hugely increased the desirable magnetic properties of the molecule the team began with. Experiments and computational modelling showed that this design modification ensures the new shift agent has a very high and directional magnetic field while being sufficiently stable to be used in solution at room temperature.

The researchers hope that their shift agent can contribute to the worldwide effort to understand the structure of the very complex biomolecules that control the chemistry of life.

“The more we can learn about the structure and functions of proteins, for example, the better and faster we will be able to design new therapies for old and new diseases,” Sessoli says. 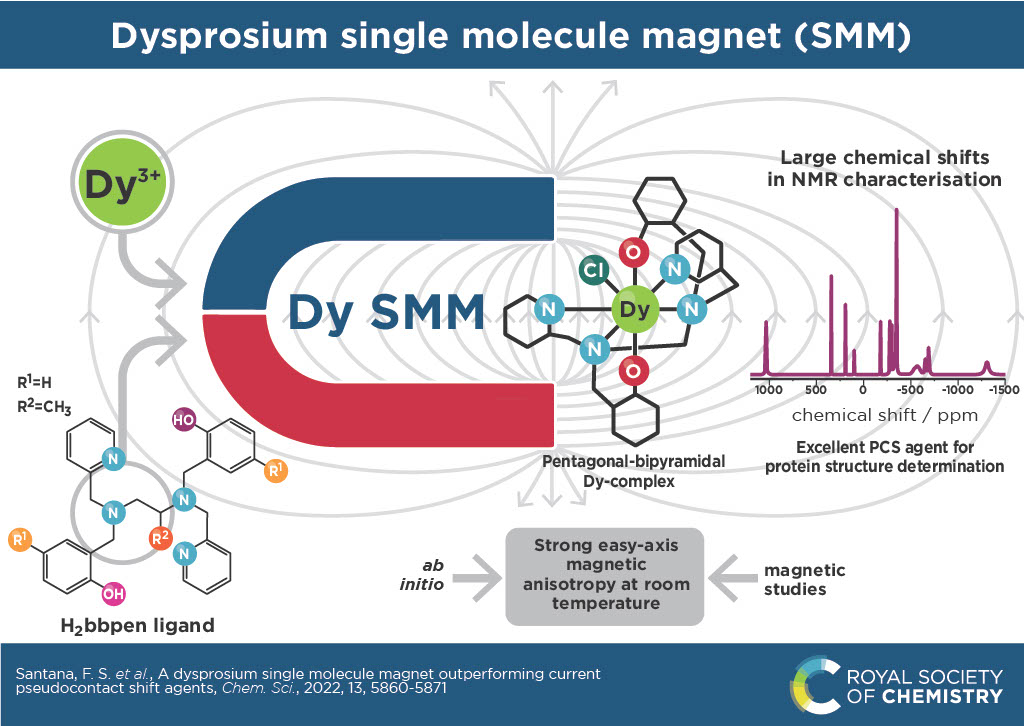