Archive for the ‘Inorganic’ Category

Nanocups of anatase TiO2 coated with Au nanoparticles are efficient photocatalysts, as reported in a recent ChemComm article by Chemical Science and Chem Soc Rev Advisory Board member Jinlong Gong and  his group at Tianjin University, China.

This new shape promises to increase reactive surface area by exposing the normally inaccessible surface of hollow spheres.  Compared to TiO2 hollow spheres, TiO2 nanocup particles increase the rate of the photocatalytic degradation of methylene blue in the visible light region by 46%.

This performance and the ease of nanocup synthesis are reasons to promote further research.  Thus, we may expect nanocups made from other metal oxides and inorganic materials to be incorporated into solar, photochemical, and catalytic applications in the future.

In addition, the ability of nanocups to confine small amounts of reactants may find utility in nanofluidic devices.

Gong et al.‘s work has recently been highlighted as part of a C&EN article on novel nanostructures.

Read this ChemComm article in full: 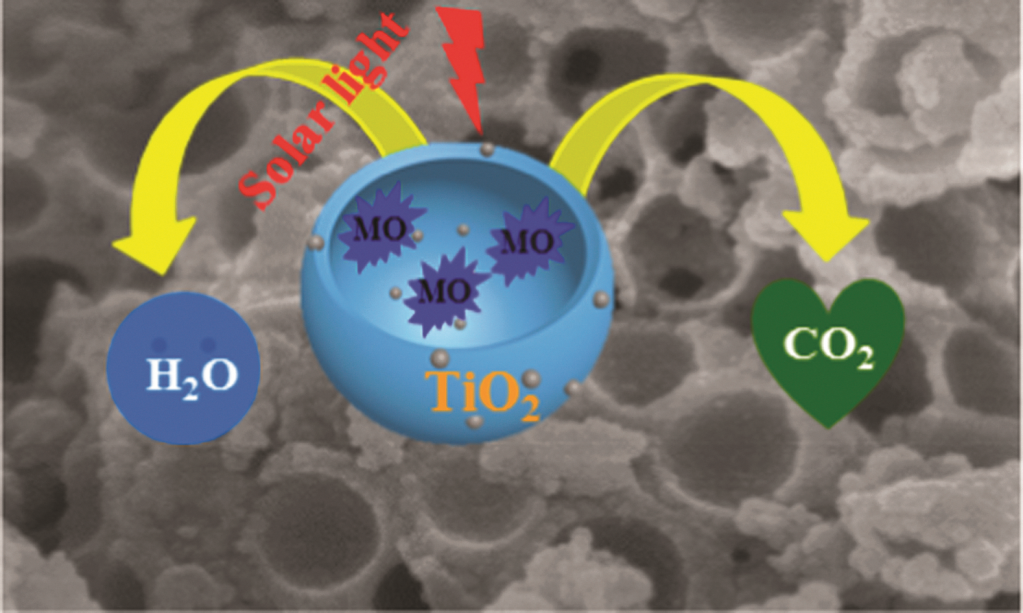 Geoff Nelson is a guest web-writer for ChemComm.  He currently works as a post-doctoral research associate in Dr David Payne’s research group in the Department of Materials at Imperial College, London.  Geoff’s current research concerns the synthesis and characterization of post-transition metal oxides for use in the energy sector.  His other research interests include carbon-based materials, biophysical chemistry, and surface science.

This year we received a high number of excellent nominations and therefore the Editorial Board have decided to award two Emerging Investigator Lectureships in 2013. The winners are Professor Louise A. Berben (University of California Davis, USA) and Dr Marina Kuimova (Imperial College London).

This annual lectureship recognises an emerging scientist in the early stages of their independent academic career.

The Editorial Board commended Louise’s contributions to the field of synthetic and physical inorganic chemistry, and Marina was awarded the lectureship for her excellent work within biophysical chemistry. Further details of the two Lectureships, including lecture locations, will be announced soon.

To find out more about the winners’ research, read some of their latest articles in ChemComm:

Also of interest: You can now browse the 2013 Emerging Investigators Issue – which features research from outstanding up-and-coming scientists

We invite you to join us for the ChemComm-RSC Prizes and Awards Symposium which will be taking place on 24 May 2013 in Dublin, Ireland.

This free one-day event will comprise of stimulating lectures reflecting the academic and industrial breadth of supramolecular chemistry, delivered by RSC Prize and Award winners and leaders in the field.

We hope you and your colleagues will be able to attend the ChemComm-RSC Prizes and Awards Symposium. For further information about this event and to register, please visit the dedicated webpage.

There is significant interest in nitrogen-containing electrocatalysts, driven by the need to find cost-effective and efficient material solutions for replacing platinum in polymer electrolyte membrane fuel cells.  However, the active sites of non-platinum group metal, oxygen reduction reaction electrocatalysts have been contentious for over 50 years.

Fortunately researchers are agreed that Metal(Me)-Nx centres may serve as possible active sites but whether it is Me-N2 or Me-N4 remains unresolved.  X-ray Photoelectron Spectroscopy (XPS) would be the ideal technique to answer this question if it didn’t rely on the use of reference spectra; none exist for the Me-N2 species which makes it less than ideal. 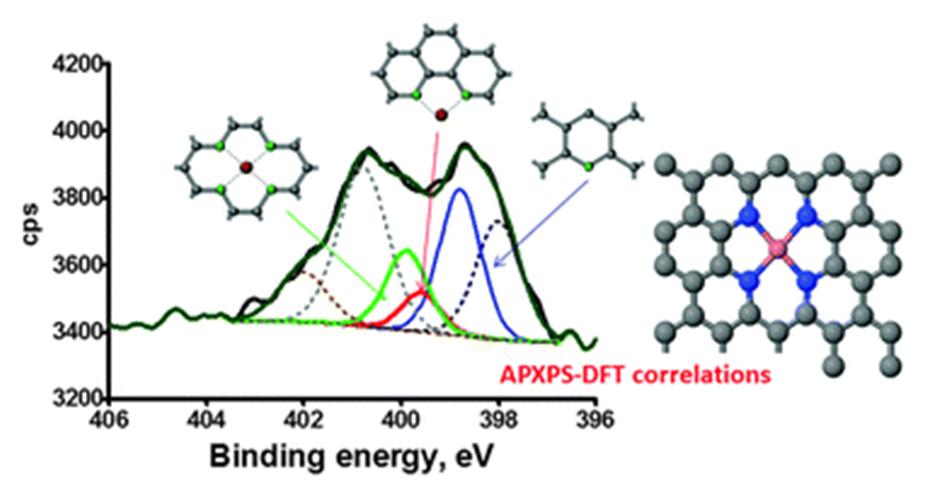 Once validated, the DFT output can be used as input for XPS curve fitting.  This has revealed rearrangement around Cobalt-Nx centres in an oxidizing atmosphere and supports the understanding of these catalysts as vacancy-and-substitution defects in a graphene-like matrix.

This work demonstrates the synergy between experiment and theory which allows critical information to be extracted that might otherwise remain hidden.

For more, read this ChemComm article in full:

Iain Larmour is a guest web-writer for ChemComm.  He has researched a wide variety of topics during his years in the lab including nanostructured surfaces for water repellency and developing nanoparticle systems for bioanalysis by surface enhanced optical spectroscopies.  He currently works in science management with a focus on responses to climate change.  In his spare time he enjoys reading and photography.

Cobalt Fischer–Tropsch catalysts have been investigated in both 2-D and 3-D, by scientists in the Netherlands and the US, using in situ hard X-ray transmission X-ray microscopy (TXM). The Fischer–Tropsch process is an important step in the production of liquid fuels from natural gas, biomass or coal.

This is the first time that this particular catalyst has been observed at the single particle level under reaction conditions, allowing the team to get a true picture of the deactivation of the catalyst which will provide information to help improve the catalyst’s productivity.

Here’s how: The pasta was pre-washed to remove impurities and then rehydrated in a solution containing a mixture of nitrates of yttrium, barium and copper. A slight excess of barium nitrate was used to make sure the desired superconducting material YBa2Cu2O7-x phase (Y123) was attained. Via a calcination process the superconducting pasta shapes were produced, removing the organic material of the sacrificial template and neatly retaining the macroscopic shape of the template.

‘Chemical black pepper and parmesan’ were provided by the use of silver nitrate in the process, which boosts electrical and structural properties. Without using this salt, structures formed are brittle, but with it, compressive strength of the shapes doubled in strength from 0.76 to 1.56 MPa.  This helped counteract the effect of porosity formed from the outgassing of the sacrificial pasta during the calcination process.

Interestingly, the pasta had its own influence on the properties of the material.  Starch-mediated reduction of Ag(I) to Ag(0) is the reason for the dark colour of the materials formed, and trace transition metals in the foodstuff were found to have an effect on electrical and superconducting properties.

Critical temperatures, Tc and current densities, Jc, in early samples were found to be low, relative to typical Y123 type superconductors when silver was not included in the synthesis, and were markedly improved when it was.  Further improvements to the superconductivity of the spaghetti-based replicas were achieved via sintering and annealing.  This work represents a highly cost-effective route to a range of superconducting materials with macroscopic architectures, compared with current state of the art processes such as CVD or PLD.  Future work will focus, in part, on further densification of the product, and purity of the sacrificial template.  Further fascinating information is provided in the electronic supplementary information.  Buon appetito!

Kevin Murnaghan is a guest web-writer for Chemical Communications. He is currently a Research Chemist in the Adhesive Technologies Business Sector of Henkel AG & Co. KGaA, based in Düsseldorf, Germany. His research interests focus primarily on enabling chemistries and technologies for next generation adhesives and surface treatments. Any views expressed here are his personal ones and not those of Henkel AG & Co. KGaA.

Metal-organic frameworks (MOFs), formed from the assembly of metal ions and organic bridging ligands, often have large pores and high surface areas.  Such properties are attractive for various potential applications from gas storage to catalysis.  The diverse structures and properties of MOFs can be extended by incorportaing functional groups onto the organic linker after MOF formation through post-synthetic modification.

MIL-101(Cr), a MOF first reported by Ferey et al. in 2005, exhibits mesoporous cages with accessible metal sites as well as high chemical and hydrothermal stability.  Amine functionalisation of the framework’s benzene dicarboxylate ligands has been reported for analagous iron and aluminium frameworks, but has so far proven elusive for MIL-101(Cr).

Burrows et al. from the University of Bath have synthesised MIL-101(Cr)-NH2 using a hydrothermal method, and found that the resultant framework is stable up to 250 °C and, most interestingly, is stable to acids.  This unusual stability has allowed them to post-synthetically transform the amine group into an arenediazonium salt which they used in situ to generate a variety of functional groups.  MIL-101(Cr)-azo, in particular, showed excellent CO2 selectivity at low pressure.

Read this HOT Chem Comm article today (free to access until the  7th of December 2012):

Lewis acidity of metal ions investigated in the gas phase

In aqueous solutions metal ions can promote acidity via the hydrolysis reaction. This is measured by a hydrolysis constant, which has previously been correlated to the ratio of the ion’s charge to size. Unfortunately lead and tin stubbornly refuse to fit this correlation; additional factors must be at work.

Anthony Stace and team investigated further by studying the minimum number of water molecules needed to stabilise a dication complex in the gas phase against spontaneous hydrolysis (called Coulomb fission in the gas phase). They found an extraordinarily good correlation between the number of water molecules required and the metal ion’s hydrolysis constant in aqueous solution.

What about those stubborn dications, lead and tin? They fit within the trend, requiring a surprising 11 and 26 water molecules to stabilise them respectively. This work suggests that Lewis acidity of metal ions is determined, in part, by the requirement that the ions remain fully solvated. 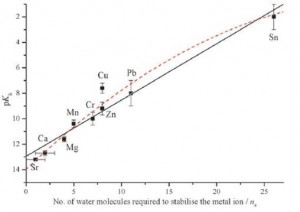 Plot of acidity constant against minimum number of water molecules required to stabilise the complex against Coulomb fission.

To find out more, download the ChemComm article today.

The Y zeolite is used as a catalyst for fluid catalytic cracking. It has a high surface area and large pores and is thermally and hydrothermally stable. But scientists are working on improving the catalyst for a better performance. One reason is that the 7.4Å micropores are limited in terms of size of hydrocarbon that they can take in. The process involves diffusion of large hydrocarbon molecules into the crystals and diffusion of the desired intermediate cracking products (diesel or light oil, gasoline and liquefied petroleum gases) out.

Introducing wider pores allows large hydrocarbon molecules to go through the process. Scientists from Spain had recently carried out a templating process (using a surfactant) to introduce highly controlled mesoporosity into zeolites. This led to improved catalytic selectivity, in which more gasoline, light oil and liquefied petroleum gas were obtained.

The team have now scaled up the catalyst and tested its hydrothermal stability and catalytic cracking performance in a refinery. The catalyst showed much better product selectivity compared to the current catalyst, says the team. 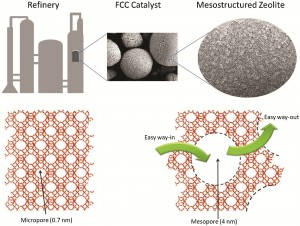