Archive for the ‘Theoretical’ Category

What Does the New Carbon Allotrope Look Like, Theoretically?

A long-lasting dispute regarding the most stable structure of cyclo[18]carbon, a new carbon allotrope, has been settled. Cyclo[18]carbon is an all-carbon ring comprised of eighteen interconnected carbon atoms. It is proposed to have two possible structures: the cumulenic structure with only carbon-carbon double bonds (Figure 1a), and the polyynic structure having alternating carbon-carbon triple and single bonds (Figure 1b). Recent experiments have confirmed that the polyynic structure is the stable form, but theorists were still puzzled: Why can’t the various computational methods reach an agreement on the molecular structure of cyclo[18]carbon? 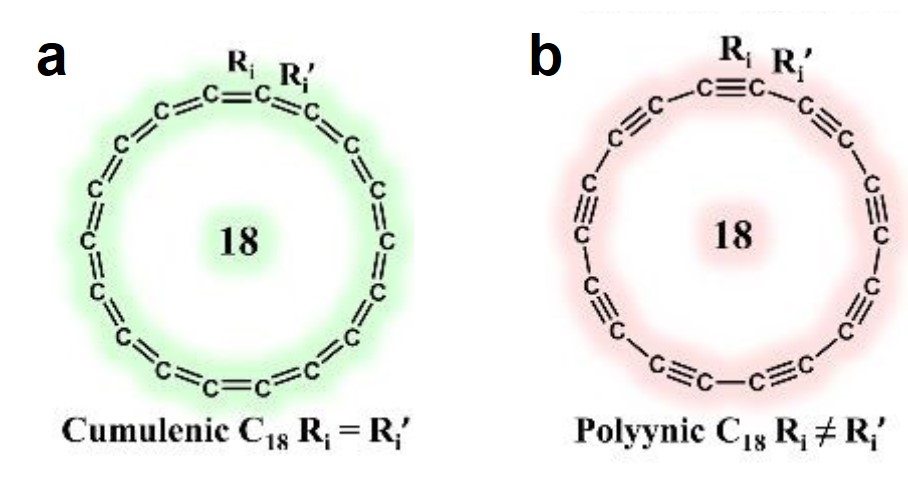 Anton J. Stasyuk and coworkers from the University of Girona, Spain, offered an answer in ChemComm (DOI: 10.1039/C9CC08399E). They found that the simulated structure strongly depended on the type of functionals used in density functional theory (DFT), which is a computational tool to derive energy-minimum molecular structures. The functionals used for DFT calculations are mathematical terms that can tune the simulation accuracy. 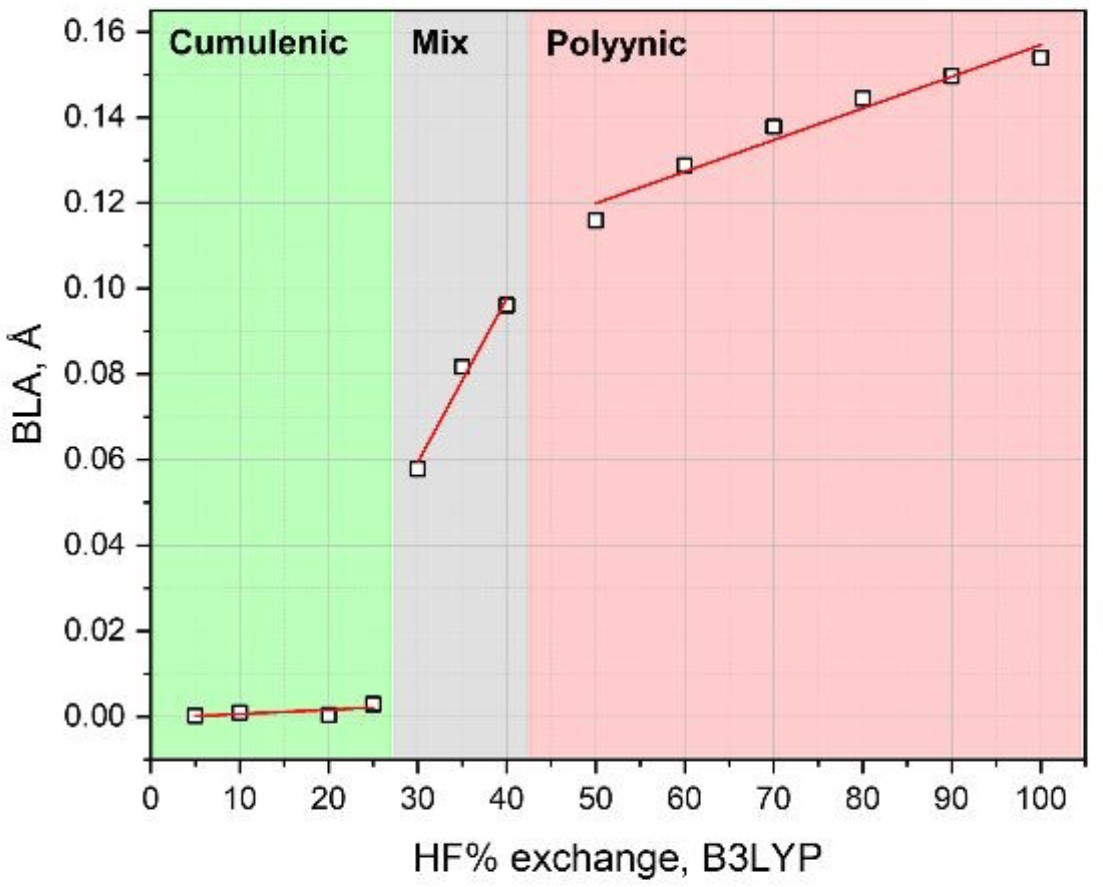 Tianyu Liu acknowledges Zac Croft at Virginia Tech, U.S., for his careful proofreading of this post.

A group of researchers at the Chinese Academy of Sciences and Southwest University want us to kick the fossil fuels habit. Their research comes to us from China, a country using roughly one quarter of the world’s yearly energy consumption, and where the finite nature of fossil fuels is a very real threat to energy supply security. Leading in energy use, China also leads the world in electricity production from renewable sources and investment in clean energy projects.

Hydrogen is considered a viable alternative to fossil fuels as it is energy rich, more so than petrol or ethanol at 39 kWh/kg (petrol: 13 kWh/kg, ethanol: 8.2 kWh/kg), and upon combustion emits only water vapour. However, hydrogen is often obtained from fossil fuels, and it will only be a practical option for the world’s future energy needs if it can be produced from a renewable source.

To this end, water splitting offers a solution. In a water electrolysis cell, hydrogen is produced at the cathode via the hydrogen evolution reaction (HER, 2H+ + 2e– –> H2), and molecular oxygen is produced at the anode (2H2O –> O2 + 4H+ + 4e–). It is ideal in theory, but high energy efficiencies are required to make water splitting viable, and this relies on the development of catalytic electrodes to minimize overpotentials required to drive the reaction. Currently, state of the art HER electrocatalysts use platinum, which is expensive and rare. Furthermore, platinum catalysts are most efficient in an acidic electrolyte and proceed 2-3 times slower in alkaline solutions. On the other hand, the best oxygen evolution catalysts perform better in alkaline environments. Using an alkaline electrolyte has overall advantages as it is less corrosive, thus increasing the stability and lifetime of the electrolytic cell.

The authors have developed a HER catalyst, using ruthenium, with overpotentials and current densities superior to Pt/C in both alkaline and acidic conditions.

DFT calculation to probe the hydrogen adsorption energies on the active catalytic surface of the Ru2P catalyst. a) and b) front and side views of the calculated Ru2P/reduced graphene oxide surface. c) free energy diagram for the HER with different catalysts.

The electrocatalyst is comprised of small, uniform Ru2P nanoparticles (~2-4 nm) evenly distributed on reduced graphene oxide sheets. The activity of the prepared catalyst (1.0 mg cm-2) for the HER was measured in an acidic medium (0.5 M H2SO4) and the overpotential to achieve a current density of -10 mA cm-2 was -22 mV, superior to Pt/C (-27 mV). In an alkaline environment (1.0 M KOH) catalyst performance was enhanced, with an overpotential of -13 mV (29 mV lower than Pt/C). High Faradaic efficiencies of more than 98% were measured in both acidic and alkaline solutions. Additionally, analysis was undertaken to further understand how the structure and composition of the catalyst influences its activity. Double layer capacitance measurements gave clues about the catalyst surface, while theoretical DFT calculations were used to study H-adsorption energies.

There is no way to avoid the reality that ruthenium is also a rare and costly metal, and for this reason may not hold the key to solving our energy woes. However, of real value are the insights gained from probing the structure function relationship of this highly active catalyst, which may guide the synthesis of rationally-designed catalysts using inexpensive and abundant materials.

What can cause a mutation in DNA?  Well, if you were to ask the Incredible Hulk (nicely), he would probably say– well not a lot, he’s more of a doer, but Bruce Banner might tell you gamma rays.  But that is so 20th century.

Application of the right level of electric field can lead to proton transfer, which can cause the formation of tautomers, i.e. isomers of the DNA bases.  By interfering with the bases and their interaction, a mismatch or mutation can be induced.

Turn the power up a little more and soon I will become Science Girl!: The DNA tautomers form under the influence of an external electric field. Circles indicate the protons that have been shifted compared to the canonical structure: H1 in blue and H2 in red.

Cerón-Carrasco and Jacquemin used a computational model to assess the effects of both positive and negative external electric fields on a DNA model to achieve an in vivo-like outcome.  When applying an increasing strength of negative electric fields, they saw the more acidic H1 proton shift to the other base; intense positive fields activated the H2 proton.

The authors conclude that intense electric fields might damage DNA in a partially controlled way.  This could have exciting applications for biochemistry or medicine– for example, selectively mutating a disease-causing cell.  Or maybe, bestowing me with superpowers…

Interested in more?  Read this HOT ChemComm article in full!

Sarah Brown is a guest web-writer for Chemical Communications.  Sarah hung up her lab coat after finishing her PhD and post-doctorate in nanotechnology for diagnostics and therapeutics to become an assistant editor at the BMJ Publishing Group.  When not trying to explain science through ridiculous analogies, you can often find her crocheting, baking and climbing, but not all at once.