A Battery Cathode with a Bee Pupa-Filled Honeycomb Structure

Increasing the volumetric energy densities of batteries is essential for improving the durability of portable electronics and the operating ranges of electric vehicles. One way to improve energy density is to enlarge the mass fraction of active materials in battery electrodes; however, the degree of enhancement remains limited. This limitation results from the densification of the electrodes when the mass fraction increases, making electron transport and ion diffusion throughout the electrodes sluggish. These drawbacks lower the utilization efficiency of the overall electrode materials.

A team of scientists from China and the United States has recently addressed the aforementioned challenges. Specifically, they synthesized a 3D cathode of carbon-coated Li2MnSiO4 (Li2MnSiO4/C) with a structure mimicking a honeycomb filled with bee pupas (Fig. 1). This lithium-ion battery cathode possesses a high mass fraction of 90% (of overall electrode mass) as well as a volumetric energy density as high as 2443 Wh/dm3.

The uniquely structured electrodes were prepared through a hard-template method (Fig. 1). Using polystyrene particles, silica surface coating, and Li2MnSiO4 precursor infiltration, the authors synthesized a carbon-coated Li2MnSiO4 honeycomb scaffold with each cavity filled with a carbon-coated Li2MnSiO4 particle. This architecture differed from previously reported 3D structures, which typically had a large portion of voids, and enabled an ultrahigh active-material mass loading of 90 wt.%. Additionally, the gaps between the scaffold and the particles functioned as ion-diffusion channels, and the carbon coatings served as electron-transport expressways. These characteristics effectively addressed the problem of sluggish ion diffusion and electron transport. 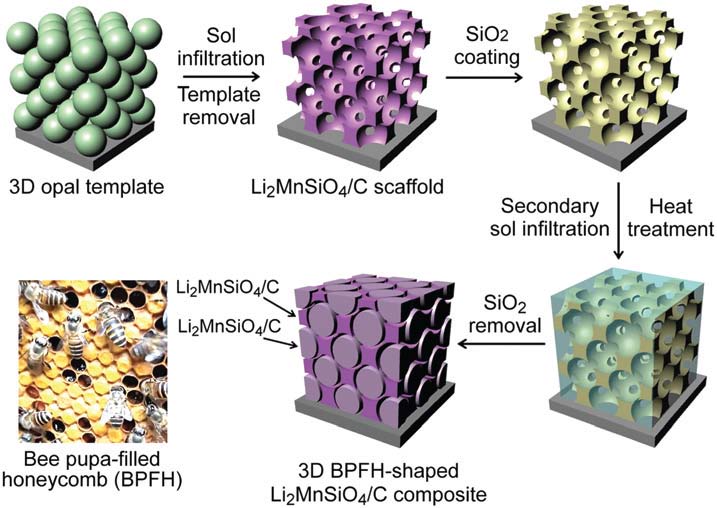 Figure 1. The synthesis procedures of the BPFH-shaped Li2MnSiO4/C electrode. The green particles and yellow scaffold represent polystyrene spheres and the silica coating, respectively.

Figure 2. (a and b) Scanning electron microscopy images of (a) the BPFH-shaped Li2MnSiO4/C electrode and (b) the Li2MnSiO4/C scaffold. (c) The capacities and the Coulombic efficiencies of the two electrodes during 100 charge-discharge cycles.

The demonstrated BPFH architecture could be extended to other materials for the synthesis of battery electrodes with both high mass fractions of active materials and outstanding volumetric energy densities.