The discovery of super resolution microscopy, followed by the announcement of 2014 Chemistry Nobel prize, facilitated a great expansion in the use of multi colour fluorescence imaging to study cellular or sub-cellular systems. Super resolution localization microscopy requires highly photostable, sufficiently bright fluorophores to achieve the blinking which is necessary to distinguish individual fluorophores within the diffraction limit. To validate all these criteria, organic dyes are a most obvious choice as fluorophores. However, chemical conversion of organic dyes upon prolonged laser exposure exhibit multicolour image artifacts leading to false-positive colocalization. Researchers from Pohang University, South Korea demonstrate a detailed protocol to understand and avoid such artifacts.

The researchers labelled cell membrane using far-IR dye (A647) which shows a red photoluminescence. But surprisingly, upon photobleaching of the A647 dye, which is blue in colour, it turned to red. This photobleached product also emits at red region, coinciding with the original emission of A647. This phenomenon is called blue-conversion. A range of commonly used organic dyes are evaluated for blue-conversion occurrences which indicates cyanine dyes show multiple blue-converted species. Interestingly, among all the dye groups there is not a single group that exhibit no blue-conversion at all. 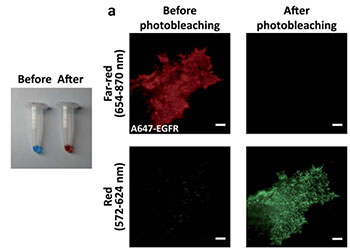 The researchers also study multicolour fluorescence imaging by colocalization of two well-known dyes. They have observed that the single-molecule brightness of the blue-converted species contributed to the production of the artifact in the reconstructed images. Finally, they concluded sufficient care must be taken in multicolour imaging applications, including colocalization, and other fluorescence-based multi-well plate format assays, to prevent false positives produced by blue-conversion of organic dyes.

Although they primarily discussed the negative effect of the blue-conversion of organic dyes, they are also hopeful to use this new photoconversion pathway of cyanine dyes for advantages of fluorescence imaging applications. They propose that super-resolution techniques require the photoactivation of organic dyes, which might exert some undesirable effects in live cells. However, the photoactivation of the blue-converted species occurs without any external stimuli and can be inferred as an advantage for super resolution techniques.