We are proud to announce that Dr. Chenfeng Ke, at Dartmouth College, is the recipient of this year’s Cram Lehn Pedersen Prize in Supramolecular Chemistry! This prize, sponsored by ChemComm, is named in honour of the winners of the 1987 Nobel Prize in Chemistry and recognises significant original and independent work in supramolecular chemistry. Our warmest congratulations to Chenfeng, a well-deserved winner! 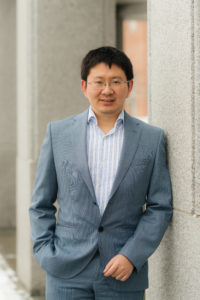 “The CLP prize was envisioned to recognize young investigators in the field of supramolecular chemistry. In his short career, Professor Chenfeng Ke has shown outstanding creativity in the development of 3D-printed mechanically interlocked monoliths. He has also discovered transformations of fluorescent supramolecular networks and their guest-induced expansion. These and other innovations show that Professor Ke is a premier supramolecular chemist.” –  Roger Harrison, Secretary of the ISMSC International Committee

The award will be presented at the 15th International Symposium on Macrocyclic and Supramolecular Chemistry held in Sydney, 12 – 16th July 2020!
This annual conference consists of sessions of invited lectures that focus upon a single topic area, award lectures and poster sessions. The conference will also feature emerging investigator talks.

You can register here.