Based on the chemical formulae, can you figure out how to convert methanol (CH3OH) into ethylene glycol (HOCH2CH2OH)? If you have constantly practiced your organic chemistry, you might have already found the answer: combining two methanol molecules and eliminating one hydrogen molecule (H2). Indeed, this methanol-coupling reaction is a promising, low-cost chemical route to upgrade methanol to chemicals with more carbon atoms. The feasibility of this route, however, is low under mild conditions without catalysts to drive the reaction.

A group of scientists led by Shunji Xie and Ye Wang, both at Xiamen University, China, has developed an environmentally friendly catalyst, Zn2In2S5, for room-temperature methanol coupling to produce ethylene glycol using solar light. This work has been published in Chemical Communications (DOI: 10.1039/c9cc09205f).

The synthesized Zn2In2S5 catalyst is comprised of 1-3 layers of nanosheets. Through a hydrothermal reaction, the researchers first synthesized multi-layer Zn2In2S5 stacks in an aqueous solution (Fig. 1a). Subsequent ultrasonication exfoliated the stacks into few-layer Zn2In2S5­ nanosheets that were confirmed by transmission electron microscopy (Fig. 1b). Zn2In2S5 is a semiconductor and its valence band (VB) resides below the redox potential of ethylene glycol/methanol (Fig. 1c). The band alignment enables Zn2In2S5 to catalyze the oxidation of methanol to ethylene glycol. 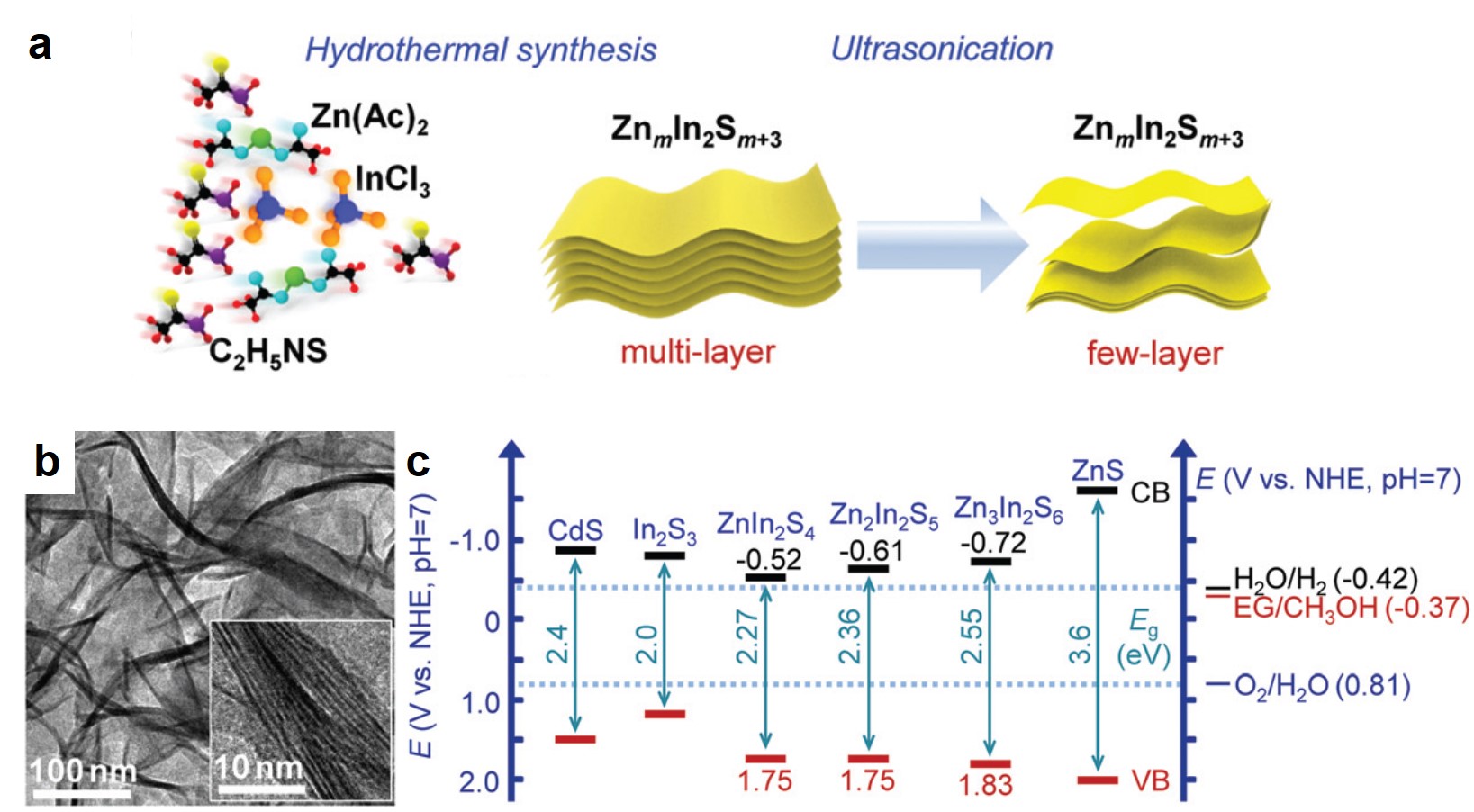 Zn2In2S5 and its composite exhibited high catalytic activity. Upon irradiation with visible light and solar light (AM 1.5), photo-induced electrons and holes generated in Zn2In2S5 (Fig. 2a). The electrons reduced protons in electrolytes and liberated hydrogen gas, while the holes moved to the Zn2In2S5 surface and split the C—H bond of methanol, forming ·CH2OH radicals. These radicals then dimerized into ethylene glycol. Through depositing a hydrogen evolution co-catalyst, cobalt monophosphide (CoP), and illuminating using AM 1.5 solar light, the authors observed that the CoP/Zn2In2S5 catalyst achieved a rapid formation rate (18.9 mmol gcat-1 h-1) and high selectivity (~90%) of ethylene glycol (Fig. 2b). The yield of ethylene glycol after 12 h of reaction was 4.5%.

Figure 2. (a) A scheme of the formation mechanisms of ethylene (from methanol) and 2,3-butanediol (from ethanol) on Zn2In2S5. EG: ethylene glycol. 2,3-BD: 2,3-butanediol. (b) Formation rates and ethylene glycol selectivity of Zn2In2S5 and CoP/Zn2In2S5 under two illumination conditions. AM 1.5: air mass 1.5 solar irradiance. HCHO is a byproduct.

Zn2In2S5 was demonstrated to effectively catalyze C—H cleavages and C—C couplings of different alcohols, e.g., from ethanol to 2,3-butanediol.