Ring-opening polymerizations produce commercial polymeric materials including epoxy resins, but they usually liberate small molecules such as the greenhouse gas, CO2. In the context of climate change, it is urgent to reduce CO2 emissions. Recently, a group of UK researchers led by Prof. Charlotte K. Williams at the University of Oxford developed a step-growth polymerization method that self-consumed CO2. The work has been published in a recent issue of Chemical Communications.

The synthesis involved two catalytic cycles (Figure 1). The first cycle polymerized L-lactide-O-carboxyanhydride into poly(L-lactide acid) (PLLA) via a ring-opening polymerization and released one CO2 molecule per polymer repeat unit. In the second cycle, epoxide molecules (cyclohexeneoxide) combined with the CO2 generated in the first step and grew into poly(cyclohexene carbonate) (PCHC) from the terminal ends of the PLLA chains. A di-zinc-alkoxide compound catalyzed both cycles and coupled the two processes together. The product is PLLA-b-PCHC block copolymers, which are composed of PLLA and PCHC covalently tethered together. 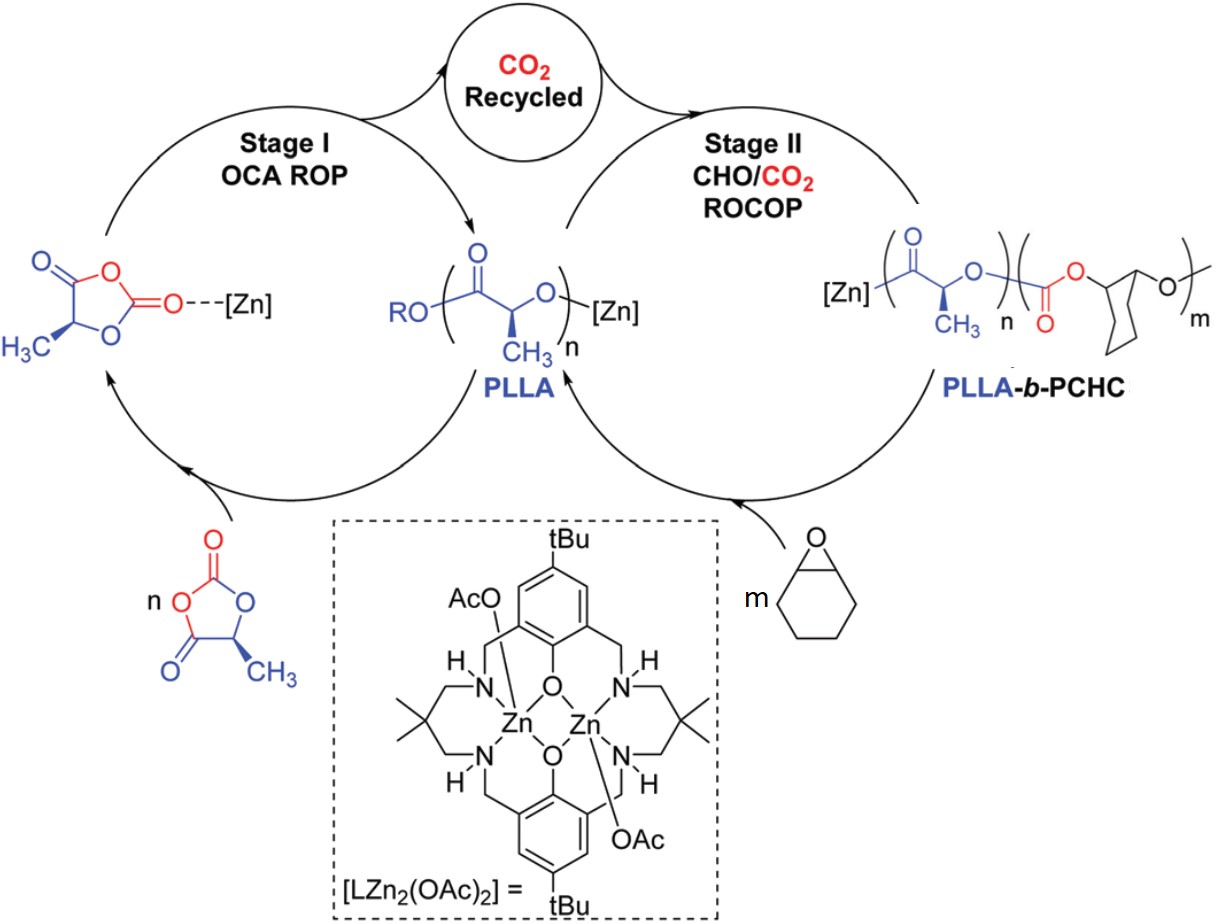 The two reactions resulted in block copolymers with few byproducts. In-situ 1H NMR revealed that the reactants in the first step (LLAOCA) were rapidly consumed during the first four hours (Step I, Figure 2a), and the concentration of PLLA increased notably. The concentration of PCHC only markedly increased after the concentration of PLLA saturated (Step II, Figure 2a). The byproduct of the second step, trans-cyclohexene carbonate, exhibited consistently low concentrations. The pronounced single peak in each size-exclusion chromatogram of the corresponding product confirmed the presence of block copolymers, instead of polymer mixtures (Figure 2b). Although the authors did not fully elucidate the origin of the excellent selectivity towards the block copolymer, they speculated that the change in CO2 partial pressure played a role. Significantly, nearly all CO2 molecules were consumed in the second step, with 91% incorporated into the block copolymer, and 9% converted to the byproduct.

Figure 2. (a) The evolution of the concentrations of PLLA, PCHC, and trans-CHC (the byproduct of the second step) with reaction time. (b) Size-exclusion chromatograms of the products at different reaction times. Mn: number-average molecular weight; Đ: polydispersity.

The authors are investigating the detailed polymerization mechanism, as well as identifying new catalysts to expand the polymerization scheme to other polymers.

Waste Not, Want Not: CO2 (Re)cycling into Block Copolymers