Xenon (Xe) is a noble gas that is widely used in lighting industry and medical imaging. Due to its trace amount in air and the energy-consuming, labor-intensive manufacturing process, Xe has a market price approximately 100 times higher than nitrogen gas (N2). Therefore, recycling Xe is practically necessary and economically appealing.

Recently in ChemComm, scientists from Colorado School of Mines (U.S.) and Pacific Northwest National Laboratory (U.S.) demonstrated an effective method to recover Xe from Xe/air mixtures. The key material this approach needs is a thin piece of film made of a microporous crystalline metal organic framework (MOF)—ZIF-8 (zeolite imidazole framework-8).

The unique porous structure of ZIF-8 renders it capable of separating Xe from N2 and O2. The pore size of ZIF-8 is in the range of 0.4-0.42 nm, and the sizes of Xe, N2 and O2 molecules are 0.41 nm, ~0.36 nm and ~0.35 nm, respectively. When Xe/air mixtures are pushed towards a ZIF-8 film, the small N2 and O2 molecules are able to permeate the film while the relatively large Xe molecules are blocked. This results in the separation of Xe from N2/O2. The ZIF-8 film in this case serves as a gas sieve (Figure 1). 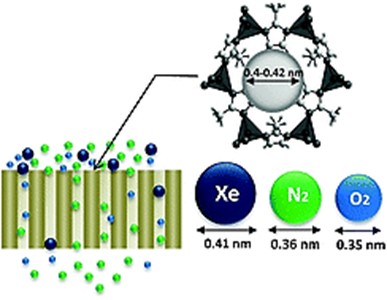 Figure 1. A ZIF-8 MOF film functions as a molecular sieve that separates Xe from N2 and O2. The pores of ZIF-8 are large enough to pass through N2 and O2 molecules but are too small for Xe to enter.

The mechanism mentioned above was experimentally verified. The researchers observed that the flow rate of air through a ~10 µm ZIF-8 film was almost 10 times higher than that of Xe. In addition, reducing the film thickness and lowering the temperature were found to enhance the separation efficiency.

This work clearly demonstrates the promising performance of ZIF-8 for gas separation. It also highlights the versatile functionalities of MOFs.

Recovery of Xenon from Air over ZIF-8 Membranes