The ethanol oxidation reaction (EOR) is a typical anode reaction that drives the energy output from fuel cells. Due to its intrinsically slow kinetics, the reaction requires proper EOR catalysts to facilitate the oxidation. Pt-based materials are highly active in promoting EOR, but the scarcity of Pt leads to high costs and demands efficient methods to recycle these materials. In addition, the instable catalytic activity of Pt significantly reduces the lifetime of EOR catalysts containing Pt. Clearly, developing inexpensive EOR catalysts with comparable performance to Pt is meaningful for the affordability and durability of fuel cells.

A research team led by Shuifen Xie at Huaqiao University and Shenzhen Research Institute of Xiamen University in China, have demonstrated a one-pot chemical reduction method of a novel EOR catalyst. This catalyst is made of Pt3Ni-coated Pd nanocrystals as shown in Figure 1. There are three main advantages for this catalyst over the benchmark Pt: Firstly, the core material Pd is more affordable. Secondly, the ultrathin Pt-alloy coating, Pt3Ni, contains relatively less Pt and is reported to exhibit high EOR catalytic activity. Thirdly, the little lattice mismatch between Pt and Pd allows seamless integration of the two metals that is beneficial to preserve the structural integrity and ensure excellent durability. 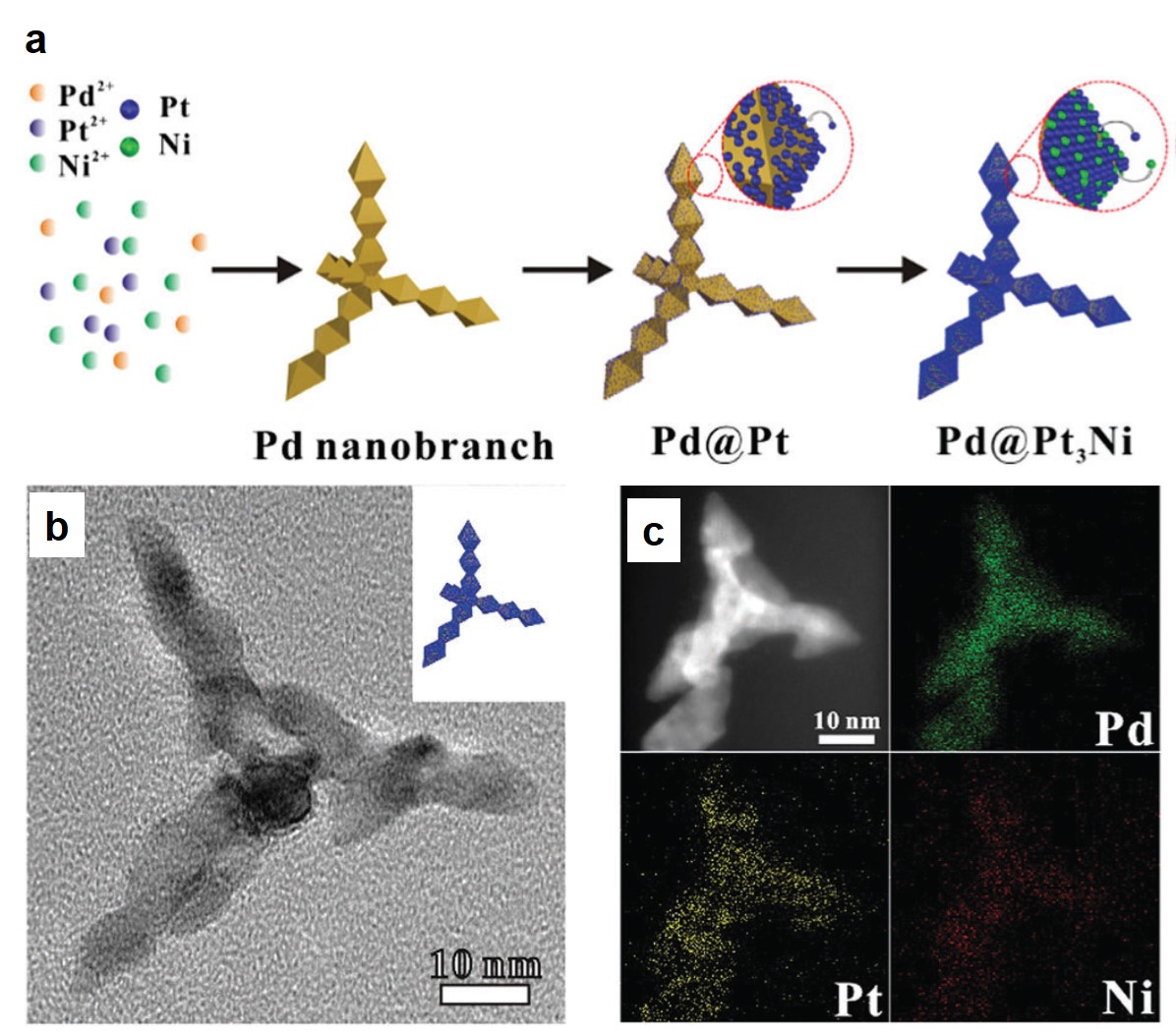 Figure 1. (a) The schematic illustration showing the key steps of the one-pot chemical reduction method. The catalyst is formed via consecutive reduction of Pd2+, Pt2+ and Ni2+ to Pd nano-branches, Pt nanoparticles and Pt3Ni coatings, respectively. (b) A TEM image of a representative morphology of a branched nanocrystal. (c) Elemental mappings depict that Pt and Ni elements exist mainly in the shell while Pd is in the core.

Electrochemical characterizations revealed that the catalytic performance of the Pt3Ni-coated Pd nanocrystals outperformed those of two commercial catalysts: Pt/C (Pt particles supported on activated carbon) and Pd black (a fine powder elemental Pd). Figure 2a compares the linear-sweep voltammograms of the three samples. The synthesized catalyst showed appreciably enhanced oxidation current at potentials beyond 0.4 V vs. RHE. The histograms in Figure 2b clearly display that the mass activity and the specific activity of the synthesized nanocrystals are the highest. The authors ascribed the superior performance to the high surface area (42.50 m2 g-1), the ultrathin Pt3Ni coating with its {111} crystal planes exposed, and the core-shell configuration.

This work signifies the feasibility of Pd-based nano-catalysts as alternatives to Pt towards catalyzing EOR. It is also expected to encourage the effort in developing a diverse array of inexpensive and high-performance catalysts for other reactions pertaining to fuel cells, including but not limited to oxidation of fuels other than ethanol and oxygen reduction reactions.

Tianyu Liu obtained his Ph.D. (2017) in Physical Chemistry from University of California, Santa Cruz in the United States. He is passionate about scientific communication to introduce cutting-edge research to both the general public and scientists with diverse research expertise. He is a blog writer for Chem. Commun. and Chem. Sci. More information about him can be found at http://liutianyuresearch.weebly.com/.