I am delighted to announce that Professor Jihong Yu (Jilin University, China) has joined the Chemical Science Editorial Board as the Associate Editor for Inorganic Materials.

Professor Yu’s research focuses on the designed synthesis of zeolitic porous functional materials. She obtained the National Outstanding Youth Fund of China in 2001, and was awarded National Prize for Natural Science in 2006, the 6th Chinese Youth Woman Scientist Award in 2009, and the Bau Family Award in 2010 for World Chinese Inorganic Chemists. She is now the Chief Scientist of the National Basic Research Project of China.

To submit your exceptional research to Professor Yu or any of our other outstanding Associate Editors, please use our online submission site.

Last week I attended the Gordon Research Conference (GRC) on Electron-Donor Acceptor Interactions in sunny Rhode Island. As per the rules of the GRC, I can’t divulge details of the science discussed but I am sure they won’t mind me saying that it was a fantastic conference – highly recommended!

One of the highlights of the meeting was the poster talks session. Here the three best poster presenters – as judged by the past and vice Chairs – were invited to give short oral presentations about their exciting research. I had the pleasure of awarding the Chemical Science and Energy & Environmental Science poster prizes to Geoffrey Hutchison (University of Pittsburgh) and Patrick Holder (MIT) respectively. 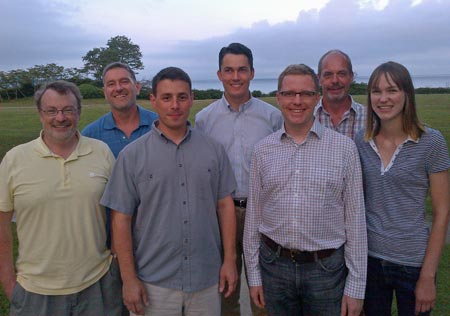 Next week I’m back in the US at the Fall ACS meeting – let me know if you’d like to meet up. Or come and visit the RSC Booth 701, there’s a lot going on…

One of my highlights from Challenges in Organic Chemistry and Chemical Biology (ISACS7) was Tom Muir’s talk on protein ligation. His work is truly inspiring so I caught up with him to find out how a boy from bonnie Scotland became a world leader in protein engineering.

Here is an excerpt from that interview; the full interview is published in Chemistry World.

Tom Muir, professor of chemistry and molecular biology, Princeton University, US, is an expert in protein engineering and its application to studying cellular signalling networks. His lab has developed a suite of chemistry-driven tools for studying the structure and function of proteins in the test tube and in live cells. In addition, his laboratory employs cutting edge methods in protein engineering (computational protein design and directed evolution), structural biology (NMR spectroscopy and x-ray crystallograghy) and cell biology (imaging).

What led you to a career in science? Were you interested in science from an early age?

I would be lying if I said I was deeply passionate about it when I was in high school, but I could always do it and it was the path of least resistance into university. It was when I got to university that I first realised that I was lucky enough to have chosen a major that I really liked. I made some great friends and we collectively discovered the subject together. I loved the logic of chemistry.

You studied for your undergraduate degree and PhD in Edinburgh. How did you find the move to the US? What do you think are the main differences between practising science in the US and the UK?

I knew within weeks of arriving in the US that I was never coming back. I loved it! I moved to Southern California and, as someone coming from the west of Scotland, I found it quite agreeable. I was at The Scripps Research Institute in La Jolla when I was a post doc and the sense of anything’s possible in science there was pervasive and infectious; the penny truly dropped in terms of what it means to be a research scientist. The ‘can do’ attitude that I experienced knocked me out. Sitting on the beach didn’t hurt either!

You started out as an organic chemist, but your work now combines chemistry with biochemistry and cell biology. How did you make the transition into this interdisciplinary research area?

The move to chemical biology wasn’t part of a grand plan. I have always felt like I am on a boat being blown in different directions on a lake. Mainly, I’ve been very lucky in the people that I have interacted with, both mentors and collaborators.

I have to thank particularly my PhD supervisor at Edinburgh, Bob Ramage, who is an amazing organic chemist and whose approach to the subject was rigorous and forward looking. He appreciated just how much more chemistry had to offer biologists, molecular biologists specifically, and he set up the post doc position for me in San Diego. I worked with Stephen Kent, who was also an amazing mentor, and I was fortunate to be in his lab during a critical period in the development of modern protein chemistry. As I learned more about biology, I absolutely bought into the importance of chemistry in solving much more complicated biological problems.

Then I moved to Rockefeller as an assistant professor. Rockefeller has many amazing biologists, probably unequalled. I had the opportunity to talk to all these luminaries and they introduced me to problems that I hadn’t even thought about. They once again highlighted the huge role that chemistry has to play, opening new doors for me.

Your research revolves around proteins and how they work. What is it about this particular type of biomolecule that fascinates you?

I am staggered by how byzantine they are. They are incredibly complicated machines. It is almost like peeling back layers of an onion: you think you understand one layer and you peel it back and there is a whole other layer of complexity underneath. With each layer, you get closer and closer to physics. It always amazes me how complicated their regulation is, how many different ways they can be controlled and how many different types of chemistry they have evolved to catalyse reactions and to recognise other types of biological molecules. But I’ve always thought of them as big organic molecules and therefore it seems natural to me that organic chemists should be studying them.

Have you never found their complexity daunting?

I always find it daunting, but I think tackling daunting tasks is exactly what academics should be doing. It is easier, because it is safe, to work on problems that are in a sense crumbs off the big table. But chemists should have a chip on this table, we should be working on problems that make us throw our hands in the air and shout ‘I’ll never figure this out!’ We have to try. At some point, everything was daunting until someone figured it out. I am not saying that I am going to be the one to figure out say epigenetics, but if nobody tries, it will forever remain a mystery. Yes, I feel daunted but that inspires, rather than scares, me.

In the spotlight: Catalysis

Catalysis is all around us, from the enzymatic reactions in our body to the synthesis of fuels and medicines. Quite rightly, it forms an important part of Chemical Science too.

We’ve gathered together some recent catalysis Edge articles and reviews for your perusal. If you enjoy these, sign up for the Chemical Science e-alert to be notified when the next issue is out.

Don’t miss your chance to be part of the 9th conference in the International Symposia on Advancing the Chemical Sciences (ISACS) series  – Challenges in Nanoscience (ISACS9).

Deadlines are fast approaching, so be sure to showcase your work by submitting a poster and take advantage of the reduced early bird registration rate before Friday 6 July 2012.

For further details on this significant event, please visit the dedicated webpage.

At Chemical Science, our focus is quality. We are committed to publishing only the most exceptional research.

That’s why we are delighted by our first Impact Factor* – an impressive 7.525. This is a tremendous result for a new journal and it firmly places Chemical Science in the top tier of general chemistry journals. Thank you to all who have made this possible – our authors, referees, readers and Editorial and Advisory Boards.

Our unique combination of high quality articles, outstanding Associate Editors, free colour and flexible format makes it clear why so many leading scientists have already chosen to publish in Chemical Science.

Join them – submit your exceptional research today to be seen with the best.

From one successful ISACS to another: Roll on ISACS8!

ISACS8: Challenges in Inorganic and Materials Chemistry is fast approaching!

Editor Robert Eagling will be joining conference Chair Professor Doug Stephan and a host of top speakers at this important event, taking place in Toronto on 19-22 July.

The programme is now online and features plenary lectures from François Gabbaï, Joseph Hupp and Kyoko Nozaki, to name but a few. Download the programme to find out who else will be there.

If you’d like to take part in this significant global event, the good news is that we’ve managed to hold registration open for a few more days. Register now before it is too late!

ISACS8 is part of the 2012 ISACS series, which commenced with the highly acclaimed ISACS7: Challenges in Organic Chemistry & Chemical Biology in Edinburgh last month.

Over 300 people turned up to enjoy 17 fantastic plenary lectures, 11 invited talks and extensive poster and networking sessions. But don’t just take my word for it – here’s what some of the delegates had to say:

‘ISACS7 was definitely one of the best conferences I have ever attended. In particular, I liked the perfect mixture of high-profile established and young emerging invited speakers and the balanced portfolio of topics ranging from organic synthesis to chemical biology.’   Michal Hocek, Academy of Sciences of the Czech Republic

Read one delegate’s blog on the conference: The Challenges and the Rewards: International Symposia on Advancing the Chemical Sciences 7

Also to come for 2012 – ISACS9: Challenges in Nanoscience

Sign up for the ISACS newsletter to be first in the know about our 2013 events.

I am delighted to announce that Professors Melanie Sanford (University of Michigan) and Tom Muir (Princeton University) have joined the Chemical Science Editorial Board as the Associate Editors for physical organic chemistry and chemical biology respectively.

Chemical Science publishes findings of exceptional significance from across all area of the chemical sciences. To submit your research to Melanie, Tom or any of our other outstanding Associate Editors, please use our online submission site.

Meet the general chemistry team in 2012

Robert Eagling and I will be attending a host of exciting conferences this year. Please do let us know if you’ll be there too – we’d love to meet you! 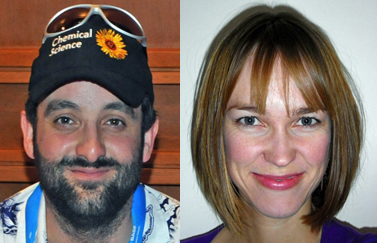 Congratulations to Hui-Chen Wang, from the University of Bath, who won the Chemical Science poster prize at the RSC Macrocyclic and Supramolecular Chemistry Meeting in Bath on 19th-20th December 2011. Her poster was entitled ‘New Boronic Acid Based Fluorescence Sensors’. 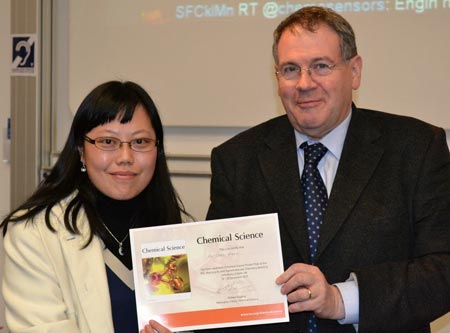 Well done also to Eric A. Appel (University of Cambridge) for his poster on ‘Aqueous Supramolecular Materials via Host-Guest Complexation with Cucurbit[8]uril’, for which he was awarded the ChemComm poster prize. 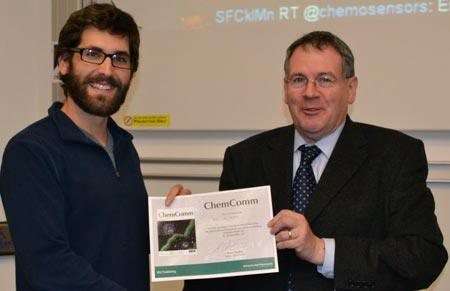 Hui-Chen and Eric receive a one-year personal subscription to Chemical Science and ChemComm respectively. Thank you to Paul Raithby, Professor of Inorganic Chemistry at the University of Bath, for awarding the prize certificates.

Did you know…? Paul Raithby has published more than 100 articles in ChemComm. He told me how his research has evolved into ‘making molecular movies’ in his ChemComm interview published in issue 1, 2012.