Osmium complex for photochemotherapy: a new way to win with hypoxic tumors

Hypoxia, an event of inadequate oxygen supply to solid tumor, is related to aggressive propagation of malignancy by altering cancer cell metabolism. It also induces resistance to standard cancer chemotherapeutics and requires ‘out of the box’ thinking to deal with, often termed as alternative strategies.

Photodynamic therapy (PDT) uses a light activated chemical, termed photosensitizer (PS), which can behave like a drug only in the presence of specific light. The photon energy could excite the PS molecule that can produce reactive oxygen species (ROS) which in turn destroys cancer cells. PDT requires an oxygen-filled environment to be effective, which restricts its application in hypoxic tumors. Alternatively, photochemotherapy (PCT) follows a similar mechanism to PDT, and differs only by exploiting an oxygen-independent reaction pathway and hence could be used under hypoxic conditions.

The search for new effective PCT agents needs optimization in a lot of parameters given the stability of the compound, and sensitivity to different physical (light, heat) and chemical (pH, tumor micro-environment) conditions. The replication of hypoxic tumor conditions in a lab-based cell culture set up is quite challenging. Despite all of these tricks, scientists from the US, Canada and Italy came up with a new class of heavy-metal based photo-chemo agents, in a cross-country collaborative scientific investigation.

Rigorous computational investigation using quantum mechanical calculations indicates all the Os(II) complexes have the requisite triplet state energies to sensitize ROS production by Type II energy transfer pathway but the actual effect in cells would likely depend on the local concentrations of these complexes and the redox environment. The detailed experimental photophysical studies reveal more on the structure-activity relationship of the complexes. All these complexes show broad absorption in the visible light region (400-550 nm) and weaker absorption in the near-infra red (NIR 700 nm) range. The excited state absorption spectra clearly show the difference in the long-lived triplet state with increasing conjugation with the addition of ligands (n=1-4). Figure 1 depicts the different photophysical pathways present in the complexes. The extended conjugation in Os-4T provides the longest triplet excited state lifetimes (3–4ms and 14–16ms), which suggests it’s superior ROS generation capability over the other complexes. 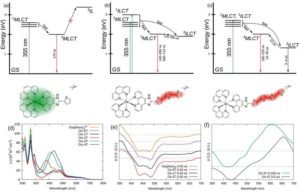 The complex Os-4T provides remarkable photocytotoxicity in human melanoma cells and the activity is dependent on the wavelength of the light source used. Authors reported an exceedingly high phototherapeutic index (PI) of 6500 (a value of more than 100 is highly active) under red light irradiation. The significant activity attained using NIR light expands the potential activity of the complex Os-4T via implication of the NIR biological window I. However, the light dependency of cytotoxicity changes in hypoxic conditions in which PI is found to be 90. The potential toxicity of the heavy metal-based complex is also investigated, and the complex is found to be safe up to 200 mg/kg doses in mice, which is pretty high compare to other PCT agents. The study gives the first insight into Os-based photo-chemo agents with remarkably high activity in both oxygen-rich normoxic and oxygen-deficient hypoxic conditions. Researchers are currently expanding this work and validating the effects of Os-4T in mice models and hope to proceed with clinical human trials for the eradication of the long-standing invincible problem of cancer.

Dr Damayanti Bagchi is a postdoctoral researcher in Irene Chen’s lab at University of California, Los Angeles, United States. She obtained her PhD in Physical Chemistry from Satyendra Nath Bose National Centre for Basic Sciences, India. Her research is focused on spectroscopic studies of nano-biomaterials. She is interested in exploring light enabled therapeutics. She enjoys food and experimenting with various cuisines, which she found resembles products/ side products of chemical reactions!