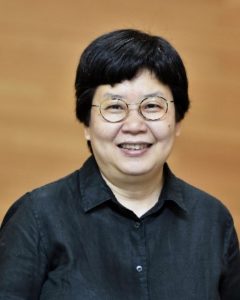 Christina Chai obtained her BSc (Hons) from the University of Canter­bury, Christchurch, New Zealand and her PhD in organic chemistry from the Research School of Chemistry, Australian National University, Canber­ra under the mentorship of the late Professor Athel Beckwith, FRS. Following her PhD, she was awarded a Samuel and Violette Glasstone Research fellowship at the University of Oxford, UK. This was followed by a Faculty position in the Department of Chemis­try, Victoria University of Wellington, NZ (1991-1993) and the Department and Research School of Chemistry, Aus­tralian National University (1994-2004) where she rose to the rank of a Reader. In 2005, Christina moved to Singapore to establish a research programme on synthetic and polymer chemistry at the then newly founded Institute of Chemical and Engineering Sciences, Agency for Science Technology and Research (A*STAR). She returned to a life in academia in 2011 at the Department of Pharmacy, National University of Singapore where she has held many administrative positions. She is currently Professor and the Head of the Department of Pharmacy. Although her major research interest is on bioactive compounds, she moonlights in polymer chemistry with special interest in biomimetic materials.

What was your inspiration in becoming a scientist who works with polymers?

My PhD training was in the area of free radical chemistry with one of the free radical ‘’gods’’, the late Professor Athel Beckwith. At that time, a superb team of chemists in CSIRO Australia had developed the RAFT process which was based on the principles of radical chemistry, and I was fascinated with the numerous possibilities of this process in creating new materials. Although this fascination remained after my PhD studies, I did not have the opportunity to work with polymers until I moved to A*STAR Singapore. I continue to be intrigued with clever ways of designing functional polymers for various applications.

When I first joined NUS, I received a grant that allowed me to work on biomimetic materials, specifically mussel-inspired coatings. I was intrigued with the claims that polydopamine (PDA) is a universal coating material, and was amazed with the reported applications of polydopamine. If one read and believed all the literature, one would imagine that PDA is the answer to all our material needs. As we worked to develop PDA functional coatings, we were hampered by the lack of information on the structure of PDA. We wanted to improve the properties of PDA but how do we improve a mystery material? So we set out to understand the oxidation chemistry of dopamine, and the process of coating and of course, to attempt to elucidate the structure of PDA. I was fortunate that my PhD student at that time, Lyu Qinghua was so obsessed with this mystery that he refused to submit his thesis until he knew the answer. I am not convinced that we have completely solved the mystery (although I did manage to persuade the student to submit his thesis) but I believe that we have made significant progress in the structural elucidation. The answer is just around the corner!

In view of my training as a free radical chemist, I was most interested in the ability to control polymer synthesis through living free radical polymerisation methods such as ATRP and RAFT. I personally know Professor San Thang, now of Monash University, who is one of the co-inventors of RAFT, and his life story and his humility despite his successes is one of my inspiration. Professor K. Matyjaszewski, the guru of ATRP and Professor Craig Hawker, with his fascinating designs of functional polymers are also heroes in my eyes.

Professor Molly Stevens from Imperial College London is a name that comes to mind as her research on materials for biomedical applications will be a game changer.

I love reading and travelling. I read fiction and non-fiction for pleasure. My love for travel is not about visiting places of interest but to immerse myself in a different environment and culture.  Although I am an introvert, I am interested in people-watching. People are fascinating subjects for study!

A doctor, a nun or a scientist – This is what I would say when I was a child when people asked me what I wanted to be when I grew up. As I doubt that I would be religious enough to qualify as a nun, this just leaves being a doctor as my alternate profession that I would choose. However I love being a scientist! I constantly worry about not having enough funds to support my research. My dream is to win the lottery so that I can support my research for the rest of my career…

Is the end in sight for the structural analysis of polydopamine? What important questions remain to be answered?

Yes, I believe that the end is in sight for the structural analysis of polydopamine. I believe that fundamental studies are important if we want to advance the applications. Without knowing the structure, how do we improve the properties of the material? There are still gaps in PDA technology that needs to be addressed. For example, one would need to know how to reproducibly control the thickness and homogeneity of the material; how to reduce the coloration and improve stability…. There is so much that we do not yet know.

Unravelling the polydopamine mystery: is the end in sight?

Despite the prominence of polydopamine (PDA) in the field of polymer and materials chemistry since it was first reported by H. Lee, S. M. Dellatore, W. M. Miller and P. B. Messersmith, Science, 2007, 318, 426–430, the structure of PDA has been an unresolved and contentious issue. Current consensus favors polymers derived from the cyclized intermediate 5,6-dihydroxyindole (DHI). In this work, compelling evidence for the possible structure of PDA is shown via detailed mass spectroscopic studies using deuterium-labeled dopamine (DA) precursors. More specifically, the major component of PDA is shown to derive from dopaminochrome (DAC) and uncyclized DA components. One major intermediate, seen at m/z 402, is characterized as a combination of benzazepine + DAC + 2H-pyrrole, which has a chemical formula of C23H20N3O4. Furthermore, DAC forms stable complexes with DA, and is a key control point in the polymerization of PDA. The decay of DAC into DHI is a relatively slow process in the presence of excess DA, and plays a smaller role in PDA formation. This study shows the covalent connectivity in PDA from the starting DA monomer, and represents an important advance in elucidating the structure of PDA.

Simon Harrisson is a Chargé de Recherche at the Centre National de la Recherche Scientifique (CNRS), based in the Laboratoire des IMRCP in Toulouse. His research seeks to apply a fundamental understanding of polymerization kinetics and mechanisms to the development of new materials. He is an Advisory Board member for Polymer Chemistry. Follow him on Twitter @polyharrisson