It is with great pleasure that we announce Dr Julien Nicolas (Université Paris Sud, France) as the recipient of the 2017 Polymer Chemistry Lectureship.

This award, now in its third year, honours an early-career researcher who has made significant contribution to the polymer chemistry field. The recipient is selected by the Polymer Chemistry Editorial Board from a list of candidates nominated by the community.

Read on to find out more about Julien… 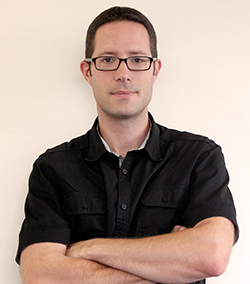 Julien Nicolas obtained his Doctor of Philosophy in Chemistry and Physical Chemistry of Polymers in 2005 from the Laboratory of Polymer Chemistry, at the Université Pierre and Marie Curie, in Paris, France, under the supervision of Prof. Bernadette Charleux. He then joined Prof. David Haddleton’s group at the University of Warwick as a postdoctoral fellow in 2006. In 2007, he became a CNRS researcher at Institut Galien, Paris Sud, and became a Director of Research in the same institute in 2016. He has published more than 80 refereed scientific articles (h-index 36), filled 5 patents and is currently Associate Editor for Chemistry of Materials (ACS).

Julien’s current research interests are multidisciplinary and span from organic chemistry and polymer synthesis to nanoparticulate systems and biomedical applications. The current interests of his group are focused on multifunctional biodegradable nanoparticles, well-defined molecular/polymer prodrug nanoparticles and controlled polymerization techniques from both fundamental and applied standpoints, with an emphasis on their application for the synthesis of biodegradable vinyl polymers and innovative biomaterials. Awards and honours he has received to date include the French Polymer Society (GFP) / French Chemical Society (SCF) award in 2016, and the 2017 Polymer Chemistry Lectureship award.

To learn more about Julien’s research, have a look at some of his publications in Polymer Chemistry:

Please join us in congratulating Julien on his award!