We are delighted to announce that, according to the latest Journal Citation Reports®, Polymer Chemistry‘s Impact Factor* has increased to 5.368.

This is a great indication of the continued strength of Polymer Chemistry as it approaches its 5th anniversary, and we would like to take this opportunity to thank all our readers, authors, referees and board members for their support and engagement with the journal.

Even better news, the journal’s Immediacy Index# has risen to an impressive 1.713, the highest of all primary research journals in the Polymer Science category by some way. 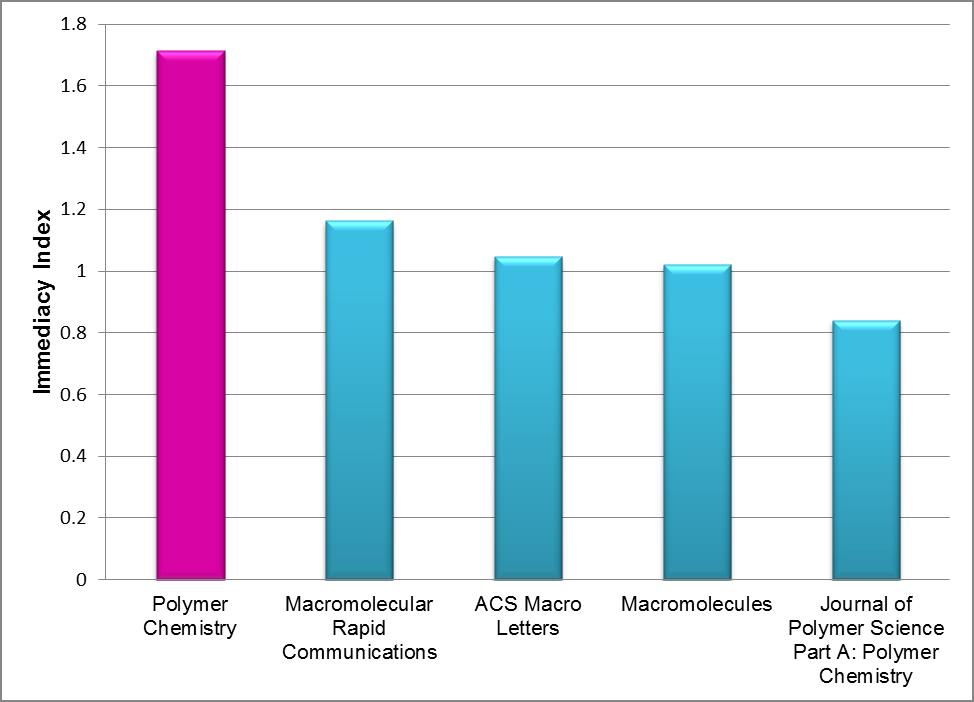 Immediacy Index is a measure of how quickly after publication articles in a journal are cited.  Polymer Chemistry‘s high number indicates that articles are being cited very quickly, and is testament to the high visibilty and relevance of the articles we publish to the polymer community.

So, to make sure your next polymer synthesis paper is seen and cited by fellow polymer chemists, we recommend submitting it to Polymer Chemistry!

Polymer Chemistry wasn’t the only Royal Society of Chemistry journal to see an increase in its Impact Factor this year.  Find a full list of our journals and their 2013 Impact Factors in this blog post.

#Immediacy Index is the average number of citations in a given year to papers published in that year.

Paper of the week: Hybrid organic–inorganic copolymers with self-healing properties

‘Over the last decade, a broad range of self-healing materials has emerged. Such systems, when they have been damaged, heal themselves either spontaneously or with the aid of a stimulus. Several of these materials draw their inspiration from the design of biological materials. On the other hand, hybrid materials or nanocomposites, defined as composites constituted of two components, one inorganic and the other one organic in nature mixed at the nanometer level, have attracted strong interest both in academia and industry. The combination at the nanoscale of organic and inorganic components leads to highly homogeneous materials, which develop extended organic–inorganic interfaces with tuneable chemical organic–inorganic bonds from weak to strong interactions.’

In this work, Rozes and co-workers prepared new dynamic materials, that can repair themselves after strong damage, by hybridization of polymers with structurally well-defined nanobuilding units. The controlled design of cross-linked poly(n-butyl acrylate) (PnBA) has been performed by introducing a very low amount of a specific tin oxo-cluster. Sacrificial domains with non-covalent interactions (i.e. ionic bonds) developed at the hybrid interface play a double role. Such interactions are strong enough to cross-link the polymer, which consequently exhibits rubber-like elasticity behavior, and labile enough to enable, after severe mechanical damage, dynamic bond recombination leading to an efficient healing process at room temperature. In agreement with the nature of the reversible links at the hybrid interface, the healing process can speed up considerably with temperature .

From 2015, Polymer Chemistry will be moving to weekly publication. We will be increasing the number of issues per year from the current 24 to 48 whilst maintaing the high quality of the journal.

This is great news and a very positive way to mark Polymer Chemistry‘s fifth anniversary next year. It is because of the support we receive from the community that Polymer Chemistry has been going from strength to strength, and we would like to thank all of our readers, authors, referees and board members for their contributions to the journal.

‘Bacterial infection is a serious problem in many areas, especially those involving the use of biomaterials. According to World Health Organization (WHO) statistics, at any time, over 1.4 million people worldwide suffer from infectious complications acquired in hospital, which have much to do with the use of medical devices. Hydrogels are three-dimensional polymer networks that are able to retain a large fraction of aqueous solvent within their structures. Due to their high water content and soft consistency, which is similar to natural tissue, hydrogels resemble natural living tissue more than any other class of synthetic biomaterial. Therefore, hydrogels have received extraordinary attention as biomaterials for use in biomedical applications, such as tissue engineering, wound dressing materials, immunoisolation16 and drug delivery. Thus, fabricating hydrogels with antibacterial properties is crucial for the biomedical field.’

In this work, Zhu and co-workers prepared fully biodegradable antimicrobial hydrogels via a thiol–ene “click” reaction under human physiological conditions using multifunctional poly(ethylene glycol) (PEG) derivatives as precursors. Water soluble and degradable PEG derivatives with multi-enes and multi-thiols, respectively, were synthesized by polycondensation of oligo(ethylene glycol) (OEG) with “clickable” monomers. Ammonium groups with long alkyl chains were incorporated into one of the precursors covalently, using dodecyl bis(2-hydroxyethyl) methylammonium chloride as a comonomer.  These types of cationic PEG-type hydrogels showed strong antibacterial abilities against both Gram- negative and Gram-positive bacteria due to the ammonium moieties. Moreover, the hydrogel with fewer ammonium moieties still possessed signiﬁcant antibacterial abilities, but low toxicity, and has the potential to be used as a medical material. 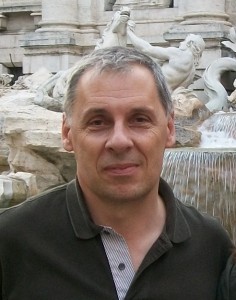 I grew up in a family with a strong appeal for nature and I have been interested in “natural things” from my earliest childhood. When I was 13, at school, I had a wonderful teacher who explained to us the connections between geology, physics and chemistry. I then started to collect minerals and, rapidly, I became more and more interested in the chemistry of these “stones”, trying to understand what they were made of. At 15, I was regularly performing “chemical experiments”, dissolving minerals by acidic treatments and trying to identify which elements were present by wet analytical tests (to the great fear of my parents! but they always encouraged me). Although I was hesitating for a time to become a pharmacist, I finally decided to embark on chemistry studies.

Some years ago, my close colleague, Dr. Sophie Guillaume, a specialist in the field of polycarbonates and polyesters, and I started to look at the topical, so-called NIPUs: Non-Isocyanate PolyUrethanes, through the ring-opening of dicyclocarbonate-telechelic polyesters, some materials we are used to preparing in our group. With a former postdoc associate, Dr. Ali Alaaeddine who was working with Dr. Bruno Ameduri in Montpellier, a specialist in fluorinated polymers, we decided to explore fluorinated versions of polyhydroxyurethanes. We anticipated that the combination of these quite different functionalities would make rather unique materials.

Polymer Chemistry is a high-quality journal with a broad audience. The editorial and production teams are very well-organized and turn-around time for peer-reviewing and production is short. 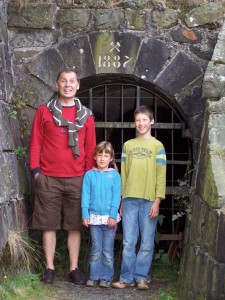 I enjoy spending time with my two kids and my wife. In winter time, all my colleagues know that I go hunting regularly. Extensive walking through the countryside refreshes my mind, gives me time for thinking quietly, and helps me keep fit (admittedly with difficulty…). Besides, I still very much enjoy taking care of my mineral collection that I have not stopped since childhood, visiting museums and mines; chemistry is never far away…

I would probably have become a forest guard or a fisherman.