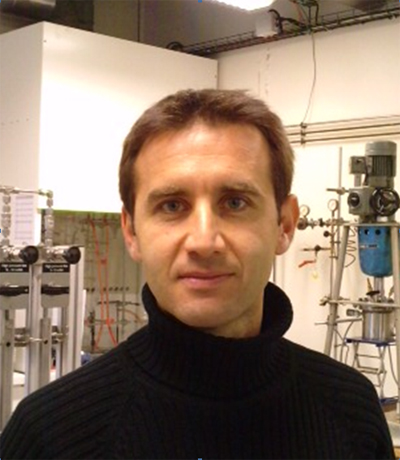 Franck D’Agosto studied chemistry at the Ecole Nationale Supérieure de Chimie in Mulhouse (France). He completed a PhD in Polymer Chemistry at the joint unit between CNRS and bioMérieux (University of Lyon, France) before working at the University of Sydney (Australia) as a postdoctoral fellow in the Key Center for Polymer Colloids. Since 2002, he has been a researcher at the CNRS in the Chemistry and Process of Polymerization Team in C2P2 laboratory (Lyon, France). His research interests focus on the control of polymer architectures by the use of different polymerization chemistries – such as catalytic and controlled free radical polymerizations – either performed in solution or in dispersed media.

What was your inspiration in becoming a chemist?
Becoming a Chemist was not really what I always dreamt of being. Still I reckon that I always enjoyed fixing things or finding the way to fix them. Has playing with macromolecular architectures and polymerization techniques anything to do with this? Maybe. But I remember that I really got into the polymer world after listening to Prof. G. Riess at the University who was the first to teach me (and grab my attention with) how to make macromolecules and what they were useful for.

What was the motivation behind the research in your recent Polymer Chemistry paper? (DOI: 10.1039/C0PY00237B)
Our group has a great experience in the field of polymer colloids and as a part of my research I am trying to take advantage of well defined polymer chains in this area. Together with Dr. Muriel Lansalot, who has a strong background in miniemulsion polymerization, we were wondering if a well defined hydrophilic polymer chain alone could play multiple roles in a miniemulsion polymerization system. In the current paper, this chain is a stabilizing agent for the monomer droplets, a surfactant precursor and a control agent for the growth of the hydrophobic chains.

Why did you choose Polymer Chemistry to publish your work?
I knew this Journal from its launch as Dave Haddleton invited me to write a review on the polyethylene functionalization work we have been doing in the group (another part of my research activities). I had already experienced the submission process which was perfect. But I reckon that the trust you can put in a new journal is really dependant upon the trust you have in the editors and the editorial board and I was really confident with that. Besides, I was amazed by the name “Polymer Chemistry” and the fact that no other journal in Polymer Science had already chosen it. I like the way the people who chose that name were thinking!

In which upcoming conferences may our readers meet you?
I will be attending the second Edition of the Frontiers in Polymer Science conference in Lyon in May, without being jetlagged. Then I’ll be mostly travelling in the US attending the International Polymer Colloid Group conference in Durham in June, and the ACS Meetings in Denver in August and Sonoma in September.

How do you spend your spare time?
Spare time? I have three children… but that’s quality time.

Which profession would you choose if you were not a scientist?
I don’t know. Maybe something around travelling, food and wine.