Gels are used in a number of applications, including wound dressings and fibre optics. They consist of a 3D network made up of one or more gelators held together by various non-covalent interactions (hydrogen bonding, π-π stacking, van der Waals interactions…) which serve to trap solvent molecules. Depending on the solvent and gelator used, the structure and/or viscosity of the gel can be controlled. A popular method of gel formation is through the addition of a gelator, or thickening agent, to a solution or solvent. Specifically, the development of low molecular weight gelators (LMWG) for the formation of new gels is a very active area of research. Once you can control the shape and viscosity of gels, as well as when and how they form, the possibilities for these systems are endless.

Many research groups have attempted to develop tools that allow gelation to be predicted for a given solvent, but most of these are limited to particular solvents or gelators. There is still no ‘magic bullet’ available for predicting the gelling ability of any solvent. Having said that, Matthieu Raynal and Laurent Bouteiller at UPMC University of Paris and CNRS in Paris, are one step closer towards addressing this deficiency. 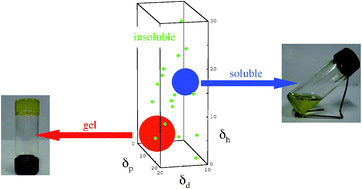 In their work, Raynal and Bouteiller applied Hansen solubility parameters (HSPs) to predict the gelling ability of LMWGs in various solvents. These parameters were initially developed to determine solubility, or to see if a given substance will dissolve in another. To reach this conclusion, three contributions must be considered: dispersive interactions, polar interactions and hydrogen bonding, and these values are then plotted on to a 3D graph, called Hansen space. The closer two molecules are to each other, the more likely they will dissolve each other. Although not without its limitations, HSPs have successfully been used by polymer chemists to select solvents for paints or coatings.

To determine if these values could be used to predict gel formation, the duo gathered information on a number of solvents and LMWG sets for which the HSPs were known. When the team plotted the information in to Hansen space, they were surprised to find for each LMWG studied that gel-forming solvents clustered together.  Raynal and Bouteiller were then able to determine the so called  ‘gelation sphere’ (a region of the Hansen space in which solvents forming gels were located in preference to those that form a solution or insoluble species) specific to each LMWG. They then plotted the distance between each solvent and the centre of the sphere predicting the solvents that would form gels, which were easily separated from those that formed a solution or insoluble species with a particular LMWG.

A new tool for the selective detection of dopamine in water, with potential applications to urine and serum, has recently been developed by the Chinese research group led by Fang Zeng and Shuizhu Wu.

Repeated tests proved that without the β-CD layer the selectivity is lost and that out of 24 potential interfering molecules, among which common amino acids, epinephrine and others, only two (histidine and norepinephrine) gave responses comparable to dopamine. While the results obtained for norepinephrine can be ascribed to the structural similarities to the target molecule, the reason behind the behaviour of the sensor towards histidine are currently unclear.

Dopamine is an important neurotransmitter involved in behavioural responses, sleep regulation, mood and learning processes among others. A malfunction in the dopamine regulating processes and related disruptions are implicated in the attention deficit disorder, Alzheimer`s disease, schizophrenia and psychosis.

If you would like to read more, then download the following ChemComm communication:-
Mesoporous silica particles for selective detection of dopamine with β-cyclodextrin as the selective barricade
Changmin Yu, Ming Luo, Fang Zeng, Fangyuan Zheng and Shuizhu Wu
Chem. Commun., 2011, Advance Article

Loudspeakers in your window

Korean scientists have used graphene sheets to make a transparent and lightweight loudspeaker which, they say, can be attached to windows and computer screens.

Graphene, whose isolation led to the Nobel prize in physics for Andre Geim and Konstantin Novoselov, is a single layer of graphite. Owing to its remarkable mechanical and electronic properties, it is set to revolutionise modern technology and new uses for it are continuously being discovered. However, one of the big challenges is to fabricate large area films of graphene.

Now, Jyongsik Jang and coworkers from Seoul National University have used inkjet printing and vapour deposition to deposit graphene oxide onto poly(vinylidene fluoride) (PVDF), which is then reduced to create a graphene film. This demonstrates not only a new method for making controlled graphene films, but also a new use for the material: for making a thin transparent loudspeaker. 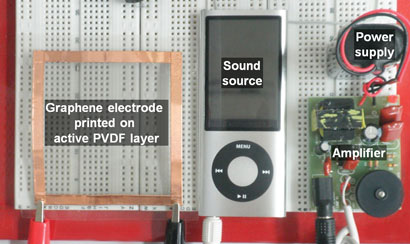 The speaker system consists of a PVDF thin film sandwiched between two graphene electrodes. The speaker works because when an electrical current from the sound source is applied, the converse piezoelectric effect causes the PDVF film to distort, creating sound waves.

Such a system would be easy to install and usable anywhere where sound is needed, Jang explains. They could even eventually be used as noise cancelling devices by creating anti-noise waves (same amplitude but with inverted phase to the original sound).

DNA bulges occur when one or more extra bases are added on one side of the DNA strain during the transcription process. These bases generally face either inwards or outwards with respect to the main helix. If we imagine DNA as a straight ladder, a bulge would be a half step that fails to reach the other side. DNA bulges, if not corrected after the transcription process, can often lead to mutations and to the rise of diseases and life threatening conditions. Particular DNA bulges are also relevant in the replication of HIV.

Due to the importance and biological significance of these structures, many studies have been conducted towards the development of molecules that specifically target and recognise these modifications. Molecules have been developed to selectively bind to bulges containing Guanine(G), Adenine(A) and aggregates of Cytosine/Thymine(C/T), but very few show high selectivity for T alone.

Another interesting feature emerging from the study is that when tested on oligonucleotides containing single-base bulges in the stem of a hairpin or a duplex structure, binding occurred without damage to the structure of the stem and only when T was in the bulge. Several other oligonucleotides with different bases in the bulge and with thymine in the hairpin stem (no bulge) were tested to further assess the selectivity of the complex, resulting in only one example of reduced binding when the T bulge has a cytosine on both sides.

NMR titrations were used to follow the binding process thanks to a clear change in the chemical shift of methylenic protons on the base after coordination.

To read the original ChemComm communication, please take a look at:-

Another successful year for the general chemistry journals

If you are interested in how the RSC performed overall then please visit the RSC publishing blog post for the full round up.

Scientists in China have designed a low-cost copper-amine complex and used it as a template for the one-pot synthesis of a zeolite that exhibits excellent catalytic performance.

Feng-Shou Xiao from Zhejiang University and co-workers from Jilin and Beijing Normal Universities, worked together on rationally designing the copper zeolite (Cu-ZJM-1) with changeable Si/Al ratios. The resulting Cu-ZJM-1 has much higher copper content and a better dispersion of copper cations compared to other zeolites reported in the literature. It exhibits excellent properties when it comes to the selective catalytic reduction of the environmentally harmful gas nitrogen oxide (NOx), by ammonia.

Hideo Nagashima and colleagues from Kyushu University have reported a new heptanuclear iron carbonyl catalyst that can reduce various carboxamides using hydrosilane, 1,2-bis(dimethylsilyl)benzene. This is an important development as the catalyst actually shortens the reaction times, even at lower catalyst concentrations and at lower temperatures, when compared with other reported iron-catalysed hydrosilane reductions.

Fancy reading more? Then download the ChemComm communication, which will be free to access until the 15th July 2011.

Lysozymes on silica – seeing is believing

Human lysozyme on mesoporous silica (SBA-15) has been visualised in 3D, say scientists in Italy. 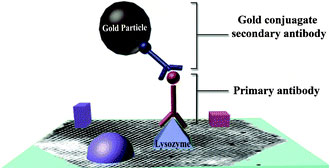 Maura Monduzzi and her co-workers at Università di Cagliari, used an immunochemical method to investigate the location of human lysozyme molecules loaded onto SBA-15. Using post-embedding immunogold staining and transmission electron microscopy results in a 3D reconstruction and shows that the protein molecules were located on the external and internal surfaces of the mesoporous silica. This result may have important consequences in biocatalysis and applications requiring sustained drug release.

Want to know more? Then download the ChemComm communication, which will be free to access until the 15th July 2011.

Looking at LUMO and charge-density of modified fullerene

The BHJ solar cells may be an alternative to conventional silicon-based solar cells, if the low power conversion efficiency can be overcome. Yasujiro Murata and colleagues from Kyoto University have shown that structurally manipulating the C60 skeleton is a promising approach for creating better acceptor materials for BHJ solar cells. This new approach means that the team can effectively control the lowest unoccupied molecular orbital (LUMO) level of the  C60 pi-system, resulting in a clear improvement in open-circuit voltage – a promising development.

Fancy finding out more? Then download the ChemComm communication, which will be free to access until the 15th July 2011.

A team of UK scientists have made gadolinium and dysprosium discs that can ‘chill well and relax slowly’ with interesting magnetic properties.