Find out about his experience as a first-time author in our recent interview. 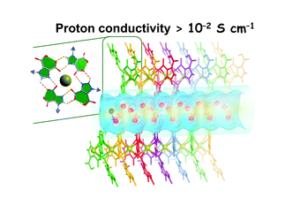 What are the main areas of research in your lab and what motivated you to take this direction?

The design and syntheses of new crystalline porous materials, such as porous coordination polymers (PCPs) or metal–organic frameworks (MOFs), and we pay more attention to the influence of their dynamic behaviours on their properties of adsorptive separation, catalysis, conduction and so on. MOF materials possess the advantages of designable and modifiable structures, more importantly, the structure-activity relationship between their structures and properties can be revealed at the atomic or molecular level, which is helpful to guide the design new materials with specific performance. Moreover, MOF materials are expected to have unique properties that traditional materials cannot, such as the “intermediate-sized molecular sieves” we reported earlier in Nat. Mater.

Can you set this article in a wider context?

New crystalline porous materials based on supramolecular interactions such as coordination bonds and/or hydrogen bonds show good prospects in many application fields. However, this kind of materials is easy to dynamically change under external stimuli, which may help us to discover some new things/mechanisms, or to further understand some certain processes in nature. For example, proton dynamic behaviour’s in fuel cells and beings are closely related with their performances and life processes. In this work, we designed and synthesized a porous hydrogen-boned quadruplex framework (like G-quadruplex in the chromosome), in which there exists one-dimensional spiral water chains in the channels. We prepared their large-size single crystals and measured the anisotropic proton conductivity, which demonstrated that it showed a super protonic conductivity along the water chains. Computation simulations showed that the protons of water transfer between oxygen atoms accompanied with water molecules moving, that is proton vehicle mechanism.

What do you hope your lab can achieve in the coming year?

I hope that students in the our lab will discover “the beauty of crystals”, “the secret of dynamics” and “the rigor of science”, and quickly grow into the relevant researchers with independent thinking and judgment through scientific research training in the next year, so that they can start their own favourite and skilled scientific research fields in one day.

Describe your journey to becoming an independent researcher

During my undergraduate period, I joined Prof. Chunlin Ni group in South China Agricultural University, where I deeply felt in the power of single crystal X-ray diffraction technology and began to study the growth of single crystals. In 2011, I went to Sun Yat-Sen University for further study, and mainly carried out the researches on the design and synthesis of crystalline porous materials under the guidance of Prof. Jie-Peng Zhang, and obtained my Ph.D. degree in 2016. Then as an associate researcher, I assisted to guide graduate students and Ph.D. candidates to carry out their researches on porous materials for adsorptive separation and catalysis in the group of Prof. Xiao-Ming Chen and Jie-Peng Zhang. In 2019, I became an associate professor in Sun Yat-sen University, and began to independently guide graduate students to carry out scientific research. My research interests mainly focus on the dynamic behaviours of crystalline porous materials playing roles in the related properties.

What is the best piece of advice you have ever been given?

Maybe it is from the Zhouyi “天行健，君子以自强不息；地势坤，君子以厚德载物”, which means “As heaven maintains vigor through movements, a gentle man should constantly strive for self-perfection. As earth’s condition is receptive devotion, a gentle man should hold the outer world with broad mind”.

Why did you choose to publish in ChemComm?

Coincidentally, my first academic paper was also published in ChemComm as outside front cover, and all three papers during my Ph.D. candidate stage were published in ChemComm, which caused I was teased as “the king of ChemComm” by my friends at that time. Actually, as a chemistry researcher, we all know ChemComm is a very good chemistry journal for quick reporting of significant results with scientific value. And I’ve been focus on the papers published on ChemComm, in which a lot of good ideas also inspires me. In the future, I also hope we have more opportunities to publish my works in ChemComm.