Synthesis of Oxazolines with a Triple Activation Twist

A group of researchers based in Valencia, Spain, have developed an enantio- and diastereoselective method to synthesize oxazolines, using a combination of silver and an organocatalyst that is only one degree of separation away from a classic British cocktail (to get that one, you might have to keep reading). This method complements the current literature by employing unactivated ketone substrates to prepare products with two adjacent chiral centres, one of which is quaternary.

Oxazolines are a versatile functional group, found in synthetic precursors and functional molecules and materials. They are a common structural feature in many natural products and in medicinal chemistry they are incorporated into synthetic drug candidates as bioisosteres of other functional groups, such as thiazoles and imidazoles. Oxazolines can also be used to prepare poly(2-alkyl/aryl-oxazoline) polymers, which have utility in biomedical fields to prepare hydrogels, nanoparticles for drug delivery and imaging, and polymer-protein conjugates. In an organic synthesis laboratory oxazolines are encountered as ligands in asymmetric catalysis, such as the bis(oxazoline) ‘BOX’ family of compounds. 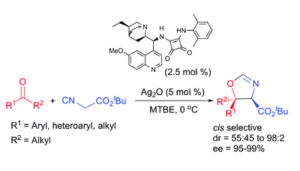 Synthesis of oxazolines from ketones and isocyanaoacetate esters via a formal [3+2] cycloaddition reaction.

The researchers optimised the reaction with acetophenone and tert-butyl isocyanoacetate, and found that Ag2O (2.5 mol%) and a dihydroquinine squaramide organocatalyst (5 mol%) promoted the reaction to obtain a quantitative yield of the cis-oxazoline (80:20 cis/trans) in 24 hours with excellent enantiomeric excess (99/93% e.e.). The researchers tested the reaction scope and found that acetophenone derivatives substituted with electron-withdrawing and donating groups (NO2, Cl, Br, Me) gave the cis-oxazoline products in reliable yields (60 – 99%), fair to good diastereoselectivity (56:44 – 95:5 cis/trans) and excellent enantioselectivities (91 – 99% e.e.). Other examples tested included cyclohexanone, 2-acetylthiophene, deoxybenzoin and acetone as well as aliphatic ketones with a combination of methyl, isopropyl and cyclopropyl groups (63-99% yield, 45:55 – 98:2 cis/trans, 56 – 98% e.e.).

The dihydroquinine squaramide organocatalyst used is a composite structure comprising a rigid cyclobutendione ‘squaramide’ and a reduced quinine analogue. The former makes strong hydrogen bonds with carbonyl derivatives while the latter confers chirality on the catalyst and has a Brønsted basic quinuclidine moiety. Quinine is an alkaloid isolated from the cinchona plant, and is the same stuff in anti-malarial tonic that is better washed down with a measure of gin. The reaction proceeds via silver-coordination to the terminal carbon of the isocyanate, accelerating deprotonation of the alpha protons by the quinuclidine base and forming a nucleophilic enoate. The electrophilicity of the ketone is enhanced by the formation of two hydrogen bonds with the N-H bonds of the squaramide, shaping a doubly activated system which rapidly undergoes a formal [3+2] cycloaddition to give the products.

At first glance this seems to be a simple and straightforward transformation, but in reality the authors have succeeded in optimising a reaction for unactivated substrates which has stereocontrol over two chiral centres, one of which is quaternary. Furthermore, the reaction uses a combination of two catalysts reacting via three modes of activation.