Tech red, an enigmatic technetium compound that has resisted characterisation for half a century, has been identified using chemical detective-work and computer modelling. The molecule’s unusual chemistry may explain why it has proven so difficult to unmask.1 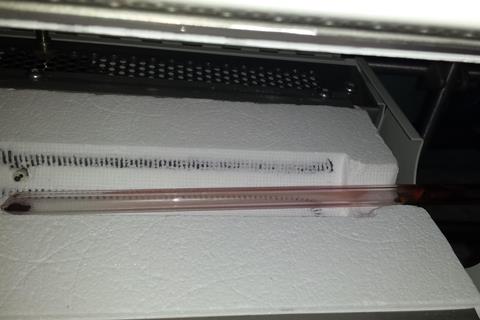 Nuclear chemists have been running into a volatile red oxide of technetium – Tc, a radioactive metal – since at least the 1960s.2 ‘Everybody seems to have accidentally made this a couple of times,’ notes Keith Lawler, a postdoctoral researcher at the University of Nevada Las Vegas (UNLV), US. Although the telltale hue makes tech red easy to spot, it has gone unidentified over the intervening decades. Tech red refuses to form crystals, so can’t studied by crystallographic methods, while technetium’s radioactivity is an inherent barrier to researching its compounds. ‘There are only a handful of laboratories who can work with large amounts of technetium, and even fewer who have access to anything other than simple characterisation techniques,’ explains John McCloy, who investigates radioactive materials at Washington State University, US.