One challenge that today’s chemists face is making large-scale processes more economical and environmentally friendly. Within this area, there has been a surge of interest in the development of bioinspired catalytic systems which, relative to traditional catalysis, have the potential to reduce chemical waste by 85% by performing efficient reactions in pure water.

Prof. Normand Voyer and coworkers from Laval University have recently published an eco-friendly methodology for the preparation of chiral a,b-epoxyketones in pure water using the supramolecular catalyst, homo-oligopeptide poly-L-leucine (PLL).

Achieving enantioselectivity in organic reactions carried out in water poses challenges but peptide derived catalysts have shown great promise in this regard. The best example of this is the Juliá-Colonna epoxidation which has been studied and improved since its discovery in the early 1980’s. While significant progress in this area has been made, most transformations using natural homo-oligopeptides have required the use of an organic co-solvent to improve reaction efficiency.

Professor Voyer shows the new, eco-friendly process begins with several homo-oligopeptides being synthesised from their corresponding amino acid N-carboxyanhydrides and used to catalyse the Juliá-Colonna epoxidation of an electron deficient olefin in water. Of all the catalysts, PLL provided the highest conversion and enantioselectivity (Table) however, the generality of the reaction appeared to be dependent on the sterics and electronics of the substrates. 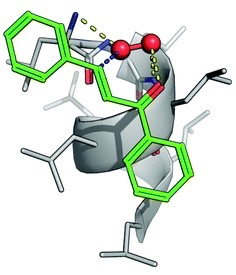 Computational analysis was used to model the PLL supramolecular catalyst and rationalise the observed reaction trends. PLL adopts a helical conformation with hydrophobic grooves distributed along the helical axis. When modelled with substrate 1 (Table), it was observed that the chalcone moiety fits perfectly within the PLL groove and forms a stable complex. It is this complexation that also aids in solubility of the ketone, removing the need for an organic co-solvent.

Epoxidation is proposed to take place through a “groove sliding” mechanism, where the substrate slides into the hydrophobic pocket generated by the leucine side chains until it reaches the N-terminal of PLL where a hydroperoxide anion is waiting (Figure). This mechanistic proposal lends to the enantioselectivity of the reaction and explains the observed electronic and steric constraints.

While the scope of PLL remains limited, this study underscores the fact that conformation and the hydrophobic nature of the oligopeptide catalysts are critical for carrying out environmentally benign organic reactions and has set a precedent for the development of future biomimetic supramolecular catalysts.

Victoria Corless is currently completing her Ph.D. in organic chemistry with Prof. Andrei Yudin at The University of Toronto. Her research is centred on the synthesis of kinetically amphoteric molecules which offer a versatile platform for the development of chemoselective transformations with particular emphasis on creating novel biologically active molecules.