Sharpening up super-resolution images by getting heavy

Iain Larmour is a guest web writer for Chemical Science and ChemComm. He has researched a wide variety of topics during his years in the lab including nanostructured surfaces for water repellency and developing nanoparticle systems for bioanalysis by surface enhanced optical spectroscopies. He currently works in science management. In his spare time he enjoys reading, photography, art and inventing.

Single molecule super-resolution microscopy is the technique which takes advantage of the photoconversion of fluorescent probes and single molecule dyes to image cellular ultrastructures beyond the diffraction limit of light. The most common approach for this technique is to genetically fuse photoactivatable fluorescent proteins (PA-FPs) to the biomolecules of interest. However, PA-FPs do not emit as much light as organic dyes, which poses a problem since this technique relies heavily on the number of photons that are collected. If you can increase the amount of photons emitted, you can increase the amount collected, which leads to higher localization and ultimately a higher resolution image.

Bo Huang and colleagues from the Department of Pharmaceutical Chemistry at the University of California, San Francisco set out to investigate ways to make the PA-FPs brighter. It was previously shown that heavy water (D2O) increased the photon count from popular small molecule dyes1; would the same effect be seen in the PA-FPs? The answer was yes: as the heavy water component increased, the photon count also increased. 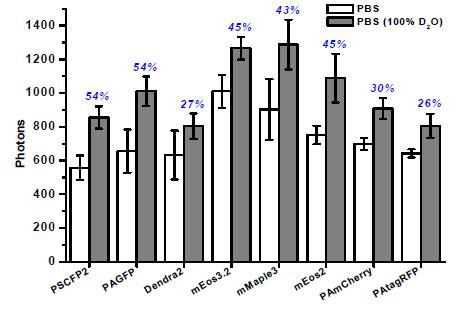 One possible concern is that heavy water in live cells can slow down cell growth and even cause cell death. However, in real life this happens on significantly longer time-scales than it does in an experimental environment, therefore, any adverse effects on live cells would be minimal.
If you use PA-FPs in your work and you want to sharpen up your images then this paper is worth a read.
To find out the details, read the ChemComm article in full:
Heavy Water: A Simple Solution to Increasing Brightness of Fluorescence Proteins in Super-resolution Imaging
Wei Qiang Ong, Y. Rose Citron, Joerg Schnitzbauer, Daichi Kamiyama and Bo Huang
Chem. Commun., 2015, 51, Advance Article
DOI: 10.1039/C5CC04575D
1S. van de Linde, A. Loschberger, T. Klein, M. Heidbreder, S. Wolter, M. Heilemann and M. Sauer, Nat. Protoc., 2011, 6, 991