When we look to our future energy resources, the need to realise new means of renewable energy is immediately obvious. Much research is being carried out around the world into the development of systems that can generate energy – from H2 to biofuels to solar fuels – all of which place great importance on high efficiency and sustainability.

Looking at the world around us for inspiration, the obvious candidate is the photosynthetic process, where visible light is employed to convert CO2 and H2O into chemical energy. This process involves the transport of electrons through a complex series of intricately aligned porphyrin-related and protein biomolecules. We can explore the development of a system that mimics the behaviour of natural systems, with respect to the relay of electrons along a series of molecules, or, alternatively, we can take the components in these systems and exploit their properties in combination with other electronically-active but non-natural molecules.

It is the latter approach which Lisa Utschig and her team from Argonne National Laboratory, near Chicago in the US, employed to generate a molecular system capable of photocatalysing the production of hydrogen. In their biohybrid system, the photosensitiser ruthenium(II) tris(bipyridine), ferredoxin (a water-soluble electron transfer protein), and cobaloxime (a cobalt(II)-based catalyst), were combined to generate a miniature reaction center that mimics those which occur in biological systems. However, the Utschig group’s system has a smaller molecular weight, which allows for characterisation of the electronic processes that occur in the system.

Lisa and her colleagues found that the presence of ferredoxin in the catalytic system acted as a scaffold to stabilise the charge-separated state necessary for electron transfer and the desired production of H2. They also observed that the catalytic behaviour of the Ru(II)–Co(II) pair was only possible in the presence of ferredoxin, which acted to extend the lifetime of the otherwise transient Co(I), allowing the desired reaction to occur.

In order to fully understand and enhance the properties of the molecular systems developed to fulfil the increasing need for energy alternatives, we need to be able to probe the structure and processes that occur in the molecule; the use of smaller analogs to those that exist in nature offers a means by which to achieve this goal. The photoactivated catalyst discussed in this work is an important step forward in the development of an optimized system for use in solar fuel production. 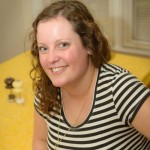 Anthea Blackburn is a guest web writer for Chemical Science. She hails originally from New Zealand, and is a recent graduate student of Northwestern University in the US, where she studied under the tutelage of Prof. Fraser Stoddart (a Scot. There, she exploited supramolecular chemistry to develop multidimensional systems and study the emergent properties that arise in these superstructures. When time and money allow, she is ambitiously attempting to visit all 50 US states.