Self-propelled micro/nanomachines were once the thing of science-fiction, but as so often is the case, fiction has become reality in recent years. Such devices could in the future find uses in environmental remediation and biomedical applications. Researchers around the world have been making progress on designing these machines, and it is a novel fuel-free autonomous self-propelled motor which is the focus of this Chemical Communication by Martin Pumera and team from the School of Physical and Mathematical Sciences at Nanyang Technological University.

Rather than focus on oxygen bubble propulsion, which often requires the use of high levels of toxic hydrogen peroxide, they have developed an acetylene bubble based motor. To achieve this they utilised the reaction of water and calcium carbide, which produces acetylene and calcium hydroxide. This approach makes use of the water that will be found in the most common application environments, but does not require reactive metals such as magnesium and aluminium. The work expands the scope of bubble-propulsion beyond hydrogen and oxygen and gives designers of micro/nanomachines greater power unit choices in their designs. 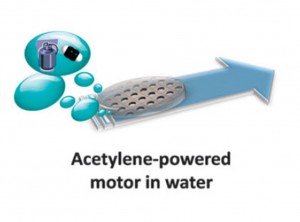 The most important part of the research reported in this Communication is the optimisation of an encapsulation layer around the calcium carbide to control the reaction. However, to find out what this layer is made of and how to prepare it you will have to read the article today.

To read the details, check out the Chem Comm article in full: