Catalysis and Sensing for our Environment (CASE) Network

The Catalysis and Sensing for our Environment (CASE) network is a group of friends keen to pool their parallel interests to develop novel molecular sensors and catalysts exploiting common underlying interests. Now key members of the CASE network (including Fossey, James, Qian, Jiang and Deng) publish two papers in the current edition of Chemical Communications that take pride of place on the front and back cover. 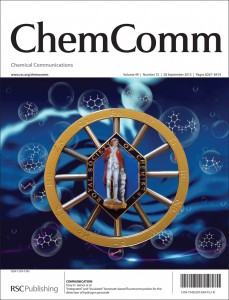 The front cover article (doi: 10.1039/c3cc43265c) describes catalytic de-borylation in a peroxide sensing regime (model for biological reactive oxygen species), the cover image pays homage to Joseph Priestly, who discovered oxygen in Birmingham, by including the RSC medal bearing his image as a centre piece. The back cover article (doi:10.1039/c3cc43083a) cleverly uses a molecule previously reported in nucleophilic catalysis (Chem. Commun., 2011,47, 10632) and uses it as a sensor for chiral secondary alcohols.

The metallocene containing sensor exists as two diastereoisomers and a surprising finding of this dual catalyst/sensor approach is that the non-catalytically active diastereoisomer is an equally efficient sensor as the catalytically active diastereoisomer. The research described in these papers derives from the close knit CASE collaboration and so the authors have used visual keys linking the front and back cover images, just as the research teams are linked via the CASE Network.

CASE network’s, free to attend, symposia have been held at the University of Bath (UK, 2008), ECUST (China, 2009), the University of Birmingham (UK, 2011), SIOC (Shanghai, 2012), University of Texas at Austin (USA, 2013) and future meetings are planned for Xiamen and Dublin. The CASE symposia have proven to be hot beds for collaborative discussion with numerous papers and successful funding applications resulting from the interactions initiated through the networking opportunities provided by these meetings. The authors gratefully acknowledge the support offered by RSC Journals who have actively supported these meetings, thus fostering the research presented in these two papers.

These two papers embody the ethos and importance of the CASE concept, since they include international collaboration and ideas that are underpinned by the complimentary combination catalysis and sensing.

Both these papers are Open Access and can be read and downloaded for free – find out more about the Royal Society of Chemistry’s Open Access policy: