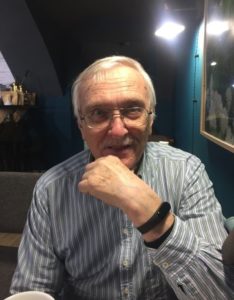 Dr. Sci. Georges M. Pavlov studied physics at the State Leningrad University and received his master degree there in 1965. After two years working as a professor of physical sciences in Algeria, GMP began his scientific career at the Institute of Macromolecular Compounds of the USSR Academy of Sciences, where in 1975 he received his Ph.D. with V. N. Tsvetkov and S. Ya. Magarik for investigation on flow birefringence and hydrodynamic solution properties of homologous series of grafted copolymers. At the invitation of prof. V.N. Tsvetkov in 1977 GMP returned to the Department of Physics of the Leningrad State University, where later he was awarded a Dr. Sci. degree for his research on molecular hydrodynamics and optics of natural and synthetic polysaccharides. Pavlov has trained many undergraduates and doctoral students. His research activities are documented in over 200 scientific papers, focused on functional synthetic and biological macromolecular compounds, their properties, establishing the relationship between the chemical structure and corresponding properties of macromolecules. This includes investigation of polyelectrolytes in an extremely wide range of ionic strengths; macromolecules of complex topology (brush-shaped, star-shaped, dendrimer, hyperbranched, associated and supramolecular structures); influence of molecular characteristics of polymers on the properties of their films; methodology of molecular hydrodynamics (velocity sedimentation, translational diffusion, viscous flow of dilute solutions) and birefringence of polymer solutions and polymer films. During his career, he worked for a long time as an invited researcher in the Universities and Scientific Centers of UK, France, the Netherlands and Germany. Currently he is a Leading Researcher in the Institute of Macromolecular Compounds, Russian Academy of Science.

What was your inspiration in becoming a polymer scientist?

When I was in high school, it was the time of the first sputniks/satellites (not to be confused with a vaccine), there was a lot of talk about the peaceful use of atomic energy. At school, I was more successful in natural science subjects (chemistry and physics) and mathematics. In the end, my choice fell on the Department of Physics of Leningrad University. At the University, when the choice of specialization came, I chose the Cathedra of Polymer Physics, at that time it was the only one in the USSR.

In collaboration with our chemist colleagues, at the Institute of Macromolecular Compounds, we investigate water-soluble amphiphilic polymer systems capable of retaining and transferring biologically active substances / drugs into a living organism. Such systems are prone to intra- and intermolecular association. It turned out that this ability can be detected by a well-known (routine ?!) method – by measuring the viscosity of dilute polymer solutions. However, two types of plots/equations of Huggins and Kremer should be applied in the interpretation of experimental data. So the tediousness/scrupulousness allowed this study to be done. Our recommendation is to use both plots in all cases of treating the viscometric data.

This is a difficult question because we are known to stand on the shoulders of giants. With regard to polymer science, in particular the molecular physics of polymers, the pioneering fundamental work was done by Werner Kuhn, Paul Flory, Hermann Staudinger, Peter Debye. This list is far from complete, and the names can be arranged in a different order. But I would like to cite the name of Viktor N. Tsvetkov, who began to deal with issues of experimental molecular physics of polymers in the USSR, in particular, flow birefringence of polymer solutions at the beginning of the 40s of the 20th century. Later (in 1958), he organized the first in the USSR Cathedra of Polymer Physics at the Department of Physics of Leningrad University, which was equipped with a whole range of self-made precision devices for studying the molecular properties of macromolecules in solutions and films. His approach was to study the homologous series of different polymers using a complex of molecular hydrodynamics and optics methods, usually 4-5 different methods were used simultaneously. This Cathedra still exists under the name: Molecular Biophysics and Polymer Physics.

Choosing a different path, I would choose something related to creativity. For example, I would to be a baker, but in France. However this extrapolation back in time is too long to be reliable and imaginable enough.

An experimental tool for the evaluation of intramolecular associative/hydrophobic interactions in polymer/solvent systems was proposed and tested. The method is based on the measurements of the viscous flow in dilute polymer solutions and the analysis of the ln ηr vs. c[η] dependence. This second derivative has a positive sign in the case of associating polymer or copolymer systems, and is negative for the non-associating ones. The value of the second derivative of this dependence may be used as a measure of the solvophobicity of polymer systems. Results obtained for three polymer systems: comb-like amphiphilic copolymers of N-methyl-N-vinyl acetamide and N-methyl-N-vinyl amine, brush-like copolymers of styrene and methyl methacrylate, and linear polystyrene, are presented and discussed.