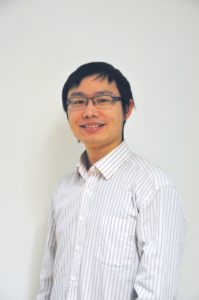 Prof. Saihu Liao studied chemistry at Huazhong University of Science and Technology, and obtained his bachelor degree in 2005. After two years of graduate study in Prof. Yuefa Gong’s group, he joined Prof. Benjamin List’s group at the Max-Planck-Institut for Coal Research (MPI-KOFO), Germany, as a PhD student, where he obtained his doctoral degree in organic chemistry in 2011. Then, he returned to China and joined Prof. Yong Tang’s group as a research associate at the Shanghai Institute of Organic Chemistry (SIOC), Chinese Academy of Sciences. In September 2016, he started his independent career at Fuzhou University, where he was promoted to full professor in 2017. Now, he is also the Director of the Key Laboratory of Molecule Synthesis and Function Discovery of Fujian Province Universities. His current research interests encompass photo-controlled polymerization, free radical chemistry, and organocatalysis.

The idea to work on polymer chemistry for my own independent research came up when I was in Prof. Yong Tang’s group. There, I was impressed by the work on polyethylene chemistry: cheap ethylene can be converted into various and significantly different products like HDPE and highly branched oil by catalyst and ligand design. The power of control on a transformation is quite appealing. Another point attracted me is the polymer products that are often can be seen and touched. This reminded me of creating new stuff like toys by myself when I was very young.

The starting point of this work is to develop a ring-opening polymerization (ROP) of lactones that can be controlled (switch on-off) by light, when we have developed several photo-controlled radical polymerizations (Polym. Chem. 2019, 10, 6662; Nat. Commun. 2021, 12, 429). To reach a light regulation on polymerization based on a light-induced excited-state proton transfer mechanism is new, and there are many interesting things in this catalytic system, in particular the mechanistic aspects.

Prof. Karl Ziegler, the previous director of the Max Planck Institute for Coal Research (Germany), and Prof. Yong Tang, my advisor at SIOC, they both inspired me to think about what kind of chemistry will make a big impact on our life in future, and also the responsibility as a scientist and a polymer chemist.

When I have time, I prefer to play with my kids. If I need some relaxation, I will drive to the seashore and lie there for an afternoon to enjoy the blue and the clean sky.

If I was not a scientist, I would be an artist (installation artist?), probably a poor one. Then, I may need a part-time job.

Read Saihu’s full article now for FREE until 3 May

A visible light-regulated organocatalytic ring-opening polymerization of lactones has been developed by harnessing the excited state acidity of aromatic alcohol photocatalysts. Commercially available 1-hydroxypyrene (PyOH) is identified as an efficient organic photocatalyst, which afforded excellent control on the polymerization, a reversible activity mediation by light, and the well-defined polyester products with predictable molecule mass and narrow dispersity.