Polymer Chemistry Author of the Month: Stefan A F Bon 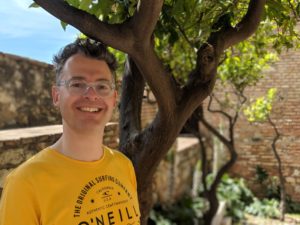 Stefan A. F. Bon is a full professor in the Department of Chemistry at the University of Warwick in the United Kingdom. He studied chemical engineering at the Eindhoven University of Technology (TUe) in the Netherlands (cum laude, 1989-1993), where he also did his Ph.D. (1993-1998) in the polymer chemistry group of prof.dr.ir. Anton L. German. In April 1998 he moved to the UK  where worked as a post-doctoral research assistant in the group of prof. David M. Haddleton at the University of Warwick (1998-2000). He was appointed as Unilever Lecturer in Polymer Chemistry at the University of Warwick in January 2001. During this period of research he focused on the mechanistic aspects of living radical polymerisation in both homogeneous and heterogeneous systems, including the first ever living radical polymerization performed in emulsion. From 2005 Stefan Bon shifted his research interests from living radical polymerization to supracolloidal chemical engineering. Current research focuses on the design of assembled supracolloidal structures and the synthesis of their colloidal and macromolecular building blocks through combination of polymer chemistry, colloid science, soft matter physics, and chemical engineering. Check out www.bonlab.info for more.

Eindhoven University of Technology in the 1990s was a fantastic place for polymer science, especially in the fields of emulsion polymerization and polymer physics and processing. We had captivating teachers, such as Alex van Herk, Anton German, and Piet Lemstra.  I was fascinated by it all as an undergrad student and hooked after my international internship at Nippon Paint where I worked on polymer colloids in the summer of 1992. I grabbed the opportunity to do my PhD on nitroxide mediated polymerizations at the end of 1993. What I love about polymer and colloid science is that you can blend chemistry, with physics, mathematics and engineering, fading out boundaries between classical disciplines.

On passion for emulsion polymerization I would like to mention Bob Gilbert. I know Bob since the mid 1990s, and have great respect for him. I still remember the discussions we had at Santa Margherita Ligure in 1996 on kinetics of radical polymerization and life. I love his mechanistic/kinetic approach to describe scientific concepts and have adopted this as a way of working in my team. On optimism and living larger than life, my former polymer chemistry teacher and friend Alex van Herk, who now works at A*STAR in Singapore. A big thank you to both.

Restricting myself to people with an academic career path I would like to mention four: Nick Ballard (POLYMAT, Spain), Athina Anastasaki (ETH Zürich, Switzerland), Stuart Thickett (UTAS, Australia), and Zhihong Nie (Fudan University, China). Why? That is simple, all four are fantastic.

My husband and I bought a house in Coventry (UK) a bit over a year ago, and since then the garden is undergoing a transformation to see how many different plants we can put into the space. I think soon we will run out of space and there won’t be a single bit of traditional British lawn left. We like to cook (Chinese/Dutch fusion) , travel, and go to the theatre/concerts. We are looking forward to seeing Pink Martini soon in Birmingham. Will pick up playing the guitar again (haha, and if you wonder what style of music: Julio Iglesias of course!).

That is a hard question. Has to be creative and with people for sure. May be something in the area of people communication/management mediation..

Nanogels made from crosslinked block copolymer micelles are used as stabilizers in the Pickering emulsion polymerization of styrene. The effect of the addition of salt, i.e. NaCl, on the emulsion polymerization is studied. It is shown that an increase in ionic strength of the dispersing medium in these polymerizations led to the formation of latexes of larger diameters. Along with an increase in size, the morphology of these polymer colloids changed from Janus to patchy with an increase in number of nanogels adsorbed on the polymer surface, as a function of the salt concentration in water. In particular, at the highest tested ionic strength, ca. 25 mM, fully armored polymeric particles surrounded by a dense layer of adsorbed stabilizing nanogels were formed. Kinetic studies carried out at varying NaCl concentrations suggested that particle formation in the reaction followed a combination of a coagulative nucleation mechanism, characterized by a clustering process of Janus precursors to form bigger aggregates, and droplet nucleation. Preliminary film formation studies on latexes made with n-butyl acrylate as a comonomer indicated the potential of this technique for the production of coherent polymer films which included a substructure of functional nanogels.