Dr. Athina Anastasaki is an Editorial Board Member and a Web Writer for Polymer Chemistry. Since January 2019, she joined the Materials Department of ETH Zurich as an Assistant Professor to establish her independent research group. 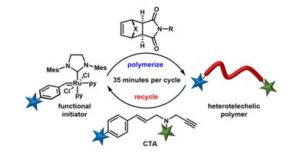 Ring-opening metathesis polymerization (ROMP) has gained popularity within the polymer chemistry community thanks to the invention of functional group-tolerant ruthenium-based initiators. However, remaining challenges in the area include the use of stoichiometric amounts of metal and the difficulty to satisfactory control the end-group functionality. To address these challenges, Gutekunst and Zhang have elegantly employed functional enyne molecules in pulsed-addition ring-opening metathesis polymerization. This led to the generation of multiple functional polymer chains from a single 3rd generation Grubbs initiator. Importantly, all polymers synthesized displayed monomodal molecular weight distributions and very low dispersity values, as characterized by size exclusion chromatography, thus supporting the high efficiency of enyne chain-transfer. Detailed analysis of the molecular weights obtained from each pulse demonstrate that 50% of the ruthenium initiator remains active even after 10 cycles which corresponds to 4% of catalyst death per cycle. This is improved over previous established protocols where 8.5% of catalyst death per cycle was reported. The materials synthesized were further characterized by mass-spectrometry. In particular, matrix assisted laser desorption ionization showed extremely high end-group fidelity obtained using the enyne chemistry with a single polymer distribution and no observable side reactions. Different monomer structures were tested, the vast majority of which were compatible with the developed protocol. Bifunctional enyne molecules can also be used to give heterotelechelic polymers. Last but not least, the possibility of diblock copolymer formation was also examined yielding well-defined block copolymers with low final dispersity values. It is the author’s belief that their user-friendly and catalyst economical method will yield to the facile synthesis of materials with reduced metal contamination thus paving the way for further biomedical and electronic applications.

1. An inert atmosphere is important to this protocol, though a glovebox is not needed. All experiments were performed with a standard Schlenk line, and solutions were degassed by simply bubbling with nitrogen gas.
2. Three equivalents of the enyne CTA are used to ensure complete conversion of the Grubbs 3rd generation initiator, but only 1.2 eq is needed for full transfer after a given polymerization cycle of an exo-norbornene imide monomer. This reflects the differences in reactivity between ruthenium alkylidenes and benzylidenes with the enyne CTAs.
3. The exo-Oxanorbornene imide examined in this protocol was also effective but required 2.4 eq of the enyne CTA to recycle the system. This implies that different monomers may have variable reactivities. 1H NMR is very useful to monitor this process, as each of the ruthenium alkylidene/benzylidene species have diagnostic chemical shifts.
4. Small molecule byproducts are formed in each cycle but are inert under the reaction conditions and do not interfere with the polymerization.
5. If any readers are interested in using this approach, feel free to reach out to willgute@gatech.edu with any questions.