This week’s issue of Polymer Chemistry is our 2020 Emerging Investigators issue, which contains articles from polymer chemistry researchers in the early stages of their independent careers and is accompanied by an Editorial from Editor-in-Chief Professor Christopher Barner-Kowollik. To celebrate this issue we are delighted to feature the profile of Dr Antoine Buchard, who published in our 2018 Emerging Investigators issue. Below, Antoine talks about his research journey and his feelings towards Polymer Chemistry! 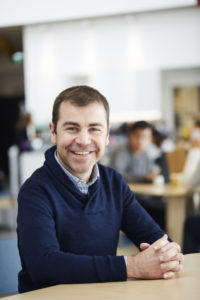 “I started my research career as a student working on new metal complexes for homogeneous catalysis, and only really ventured into polymer chemistry when some of our complexes showed interesting activities in the ring-opening polymerisation of lactide. Since then, I have been really interested in polymer chemistry because it is an incredibly diverse area, which I think offers a lot of creative space for both fundamental and applied work.

Today, using renewable feedstocks to make novel polymers is the underlying theme of my research program. I am particularly interested in using natural sugars as a sustainable, highly diverse and functionalisable resource to build polymers with interesting properties, including potentially less impact on the environment.  Our work addresses all aspects of the development of new polymers, from the synthesis of novel monomers, the design of new polymerisation catalysts and processes (including heterogeneous (ref Polym. Chem., 2019,10, 5894-5904)), detailed mechanistic and structure-properties studies, up to the applications of the polymers themselves. Polymer Chemistry is an ideal publication platform for this research, because of the broad scope of the journal, the diversity and expertise of the editorial team, as well as the breadth of article types possible.

Our group have for example recently discovered a method that replaces phosgene with carbon dioxide for the synthesis of cyclic carbonate monomers. We have successfully applied this protocol to various sugar derivatives, including deoxyribose (ref Polym. Chem., 2018,9, 1577-1582) and thymidine (ref Polym. Chem., 2017,8, 1714-1721) and developed promising tuneable, biocompatible and biodegradable polymers, which were also tested as tissue engineering scaffolds for regenerative medicine.

We took the opportunity of the 2018 Emerging Investigator issue to explore slightly different chemistry than usual and investigate the effect of changing some oxygen atoms with sulfur in the backbones of some of our sugar-based polycarbonate (ref Polym. Chem., 2018,9, 1577-1582). To this day it is still unclear! But along the way, we developed some new methodology for use of CS2 in the cyclothio-carbonation of the trans 1,3-diol motif of ribofuranoses, and isolated the first examples of cyclic xanthate monomers derived from natural sugars. Using controlled ring-opening polymerisation, regular poly(xanthate) and alternating poly(trithio-alt-thiocarbonate) species were obtained, and we showed that the sugar backbone influenced greatly the regioselectivity of monomer opening. These polymers formed a new family of degradable sulfur-containing sustainable polymers that attracted some attention from material scientists, and that we are still investigating today and hoping to report on further soon. Featuring in the 2018 Emerging Investigator issue was a great recognition and reward for the work done in my group over the past few years, and has spurred us to keep working in this area.

I am really looking forward to the 2020 Emerging Investigator issue of Polymer Chemistry. I am always curious to discover newcomers in the field and how they envisage the field. With the biennial Pioneering Investigators issue, these issues really set themselves apart from regular issues. I have found that authors usually want to rise to the challenge and report especially exciting results, so it is often a great read!”

Antoine is a Royal Society University Research Fellow and Reader in Chemistry within the Centre for Sustainable and Circular Technologies (CSCT) at the University of Bath (UK). His research interests include novel chemical transformations and use in catalysis of renewable resources for the synthesis of sustainable polymers and their applications. He is also a member of the UK Catalysis Hub.