Paper of the month: Precise control of single unit monomer radical addition with a bulky tertiary methacrylate monomer toward sequence-defined oligo- or poly(methacrylate)s via the iterative process

Being able to achieve perfect sequence of the repeating units/monomers has recently attracted significant attention within the polymer chemistry community and the ultimate aim is to achieve similar monomer precision with natural biomacromolecules, such as DNA or proteins. Ouchi and co-workers contributed to this direction by exploring in detail the iterative single unit monomer radical addition of a bulky tertiary, adamantyl and isopropyl methacrylic monomer (IPAMA) in order to yield sequence-defined oligo- or poly(methacrylates) in high yields. The authors focused on improving the efficiency of the single unit addition and eliminating all unfavourable products, which is a significant challenge of this technique. To achieve this, the introduction of an activated ester for the alkyl halide or the adduct was essential in improving the accuracy of the single unit addition of IPAMA. In particular, a 4 step cycle consisting of “radical addition”, “transformation”, “selective cleavage” and “active esterification” was elegantly developed. Although one more step was required to change the electron density of the halogen terminal, the efficiency of single unit addition was enhanced and high yields were obtained. Importantly, and despite the yields being close to 100%, the authors suggest that the additional introduction of some supporter such as solid resin would make the presented approach much more scalable and practical. 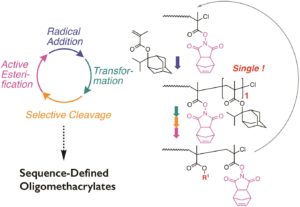 Read the full article for FREE until 3rd June!

Dr. Athina Anastasaki is an Editorial Board Member and a Web Writer for Polymer Chemistry. Since January 2019, she joined the Materials Department of ETH Zurich as an Assistant Professor to establish her independent research group.