Paper of the month: Enzyme-driven biodegradable nanomotor based on tubular-shaped polymeric vesicles

Toebes et al. report an enzyme-driven biodegradable nanomotor that moves in the presence of fuel 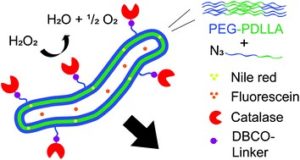 The potential of nanomachines to mimic biological systems that can continuously move in and between cells to perform a function has attracted significant attention over the past decades. Although the autonomous movement, speed and functionality of various artificial nanomotors has improved over the years, it is interesting to note that the vast majority of them are based on catalytically active metals and harsh metal surfaces while requiring toxic fuel for propulsion. Wilson and co-workers are the first to report a biodegradable nanomotor which can autonomously move in the presence of fuel while carrying a load. To achieve this, Wilson’s group created poly(ethylene glycol)-b-poly(D,L-lactide) (PEG-PDLLA) polymerosomes with 5% wt% functional azide handles by employing ring opening polymerization. The spherical polymerosomes were then transformed to nanotubes by inducing osmotic pressure. The azide handles presented in periphery of the nanotubes were converted into COOH groups using strain-promoted alkyne-azide cycloaddition. Finally, catalase was coupled to the nanotubes surface via EDC coupling. Importantly, the catalytic conversion of H2O2 by the enzyme provided adequate propulsion to move the nanotubes forward. In addition, both hydrophobic and hydrophilic drugs could be simultaneously loaded in the tubes. Given the advantageous characteristics of tubular-shaped polymersomes, such as high-aspect-ratio and higher loading capacity, such materials can be potentially used as excellent nanocarriers for drug delivery.

This paper is free to read and download until 6 August!