Paper of the month: Micro-patterned polymer brushes by a combination of photolithography and interface-mediated RAFT polymerization for DNA hybridization 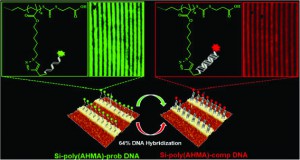 The covalent immobilization of DNA probes has been extensively studied over the past ten years. Among others approaches, the binding of protected organic molecules on the silicon surfaces followed by the deprotection of the attached groups is perhaps one of the most popular routes. However, the harsh conditions typically utilized for the deprotection have a detrimental effect on the quality of the surface and as such alternative approaches have also been exploited including growth of brushes from a range of substrates.

In this paper, Caykara and Cimen investigated the micro-patterning of poly(6-azidohexylmethacrylate) [poly(AHMA)] brushes via a combination of photolithography and interface-mediated reversible addition-fragmentation chain transfer (RAFT) polymerization for DNA hybridization. Upon immobilization of the RAFT agent on the Si surface followed by the attachment of 2-(2-carboxyethylsulfanylthiocarbonylsulfanyl)propionic acid (TTC5) (photoresist-coated substrate), poly(AHMA) brushes were grown via interface-mediated RAFT polymerization. AFM was used to determine the thickness of the polymer brush which was found to approach the average thickness of a uniform (AHMA) brush film. Propargylamine was subsequently used to functionalize the azide groups of poly(AHMA) via a click reaction as confirmed by X-ray photoelectron spectroscopy (XPS). The micro-patterned poly(AHMA) brushes with amine pendant groups were then chemically modified in order to function as selective adsorption sites for DNA hybridization. In order to form a non-active background, the probe DNA molecules were successfully coupled onto the micro-patterned poly(AHMA) brushes, as shown by AFM and ellipsometry. The probe DNA modified surfaces were subsequently incubated in the presence of complementary DNA and the successful hybridization of complementary DNA molecules on the micro-patterned poly(AHMA) was confirmed by confocal microscopy and AFM. This simplified and straightforward approach provides a platform for the immobilization of complicated structures on silicon surfaces with potential applications in biosensing and the production of novel materials.

1. 11-amino-1-undecene (AUD) cannot be attached directly to the hydrogen terminated silicon surface because of the free amino functional groups. So, in this study, the amino group was protected by the t-butyloxycarbonyl group (t-BOC). The protection reaction is easily performed but during the vacuum purification of the product, control of the temperature and pressure is of vital importance. Gentle heating and constant vacuum pressure must be carried out to prevent the decomposition of  t-BOC-AUD.

2. Si-H surface can be easily oxidized at atmosphere. So, rinsing of Si-H surface and coating of t-BOC-AUD must be performed immadiately in a glove box.

3. In the photolithography process, coating of the photoresist was carried out under yellow light. Until removing of the unexposed areas, the surfaces must be kept under safe light.

4. To avoid loss of resolution during the UV exposure, obtaining a thin and homogenous coating on the silicon surface is extremely important. Therefore, the silicon wafers should be cleaved into uniform square or rectangle pieces before the lithography process and the surfaces must be modified homogeneously.

Micro-patterned polymer brushes by a combination of photolithography and interface-mediated RAFT polymerization for DNA hybridization, by D. Cimen and T. Caykara, Polym. Chem., 2015, 6, 6812-6818

Dr. Athina Anastasaki is a Web Writer for Polymer Chemistry. She is currently a Warwick (UK)/ Monash (Australia) research fellow working under the Monash Alliance. Visit http://haddleton.org/group-members for more information.