Paper of the month: Preparation of complex multiblock copolymers via aqueous RAFT polymerization at room temperature 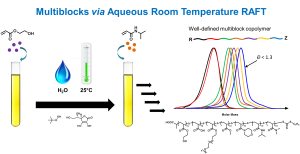 The preparation of high-order multiblock copolymers in a one pot process using reversible addition-fragmentation chain transfer (RAFT) is highly attractive due to the rapid polymerization rates, the achievement of quantitative conversions for each block, the lack of purification steps between the intermediate monomer additions (time effective and resource effective) and the narrow molecular weight distributions that can be attained. The “secret” of this success is the choice of high kp acrylamide monomers and water as the reaction solvent allowing for full monomer conversion to be obtained whilst employing very low amounts of free radical initiator. However, applying this polymerization methodology to lower kp monomers, such as methacrylates and acrylates, can be problematic as a higher concentration of initiator will be required to “push” the reaction towards completion and side reactions are also likely to occur at elevated temperatures, typically employed for this polymerization protocol. High temperatures are also disadvantageous for the polymerization of monomers that possess an LSCT upon polymerization (e.g. N-isopropyl acrylamide (NIPAM)).

In this work, a new approach to prepare multiblock copolymers via room temperature aqueous RAFT is presented. The authors implement the suitable redox couple tert-butyl hydroperoxide/ascorbic acid (TBHP/AsAc) to polymerize both acrylate and acrylamide multiblock copolymers with low dispersity values and high end-group fidelity exemplified by several in situ chain extensions. The challenge of working with slightly lower kp monomers is also highlighted as both low and high molecular weight tailing is evident for the acrylate multiblocks whilst only gradual broadening and no shoulders are observed for the acrylamide analogues. A multiblock that consists of both acrylamide and acrylate monomers has also been targeted, demonstrating the versatility of the approach to obtain more complex multiblock structures. The main advantage of this work is the possibility of incorporating thermoresponsive blocks (e.g. NIPAM and diethyl acrylamide (DEA)) in the multiblock composition and limiting side reactions, often occurring at higher temperatures. Another interesting feature of this paper is the ability to control the polymerization of more hydrophobic (and not water soluble) monomers (e.g. methyl acrylate and ethylene glycol methyl ether acrylate) which were also successfully included in the multiblock sequence with a high degree of control. In contrast with multiblock copolymers obtained via single electron transfer living radical polymerization (SET-LRP) or atom transfer living radical polymerization (ATRP) methods, RAFT offers the additional advantage of allowing the incorporation of acidic monomers in the multiblock composition. The next challenge to tackle is to polymerize even lower kp monomers (such as methacrylates) with a similar level of control.

1) When working at room temperature the viscosity is high. To avoid a loss of MW control after few block extension, a strong stirring for a good homogenization of the polymerization mixture is necessary.

2) The mixing of acrylate and acrylamide blocks is rather difficult because of the difference in reactivity of each family of monomers. Normally poly(acrylates) are better reinitiating group than poly(acrylamides) and therefore should be polymerized first.

3) In the redox initiator couple tert-butyl hydroperoxide/ascorbic acid (TBHP/AsAc), we found that a lot less AsAc could be used than that reported, and yet still give efficient initiation. In fact we observed that AsAc could act as an inhibitor of the radical polymerization. We are currently investigating the optimal ratio of the reducing and oxidizing agents.

4) The water soluble hydroxyethylacrylate monomer needs to be carefully purified because of diacrylate contamination, which is responsible for the shoulder observed at high MW on SEC analyses.

Dr. Athina Anastasaki is a Web Writer for Polymer Chemistry. She is currently a Warwick (UK)/ Monash (Australia) research fellow working under the Monash Alliance. Visit http://haddleton.org/group-members for more information.