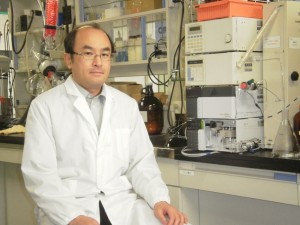 Professor Makoto Obata received his Ph.D. degree in polymer chemistry from Hokkaido University, Japan in 1999. In 2000, he joined Professor Percec’s group at the University of Pennsylvania as a postdoctoral fellow. After one and a half years, he joined the faculty of Nara Women’s University from 2001 to 2009. In 2009, he moved to the University of Yamanashi, where he is now an Associate Professor of Applied Chemistry. His research area is the synthetic chemistry of functional polymers containing carbohydrates and dyes.

The training of my scientific expertise started at Asahikawa National College of Technology, Hokkaido, Japan, when I was 15 years old. I had an impressive supervisor at the college, and I was enthusiastic about studying my first research project on the synthesis of polymers bearing crown-ether for lithium ion capturing. After this experience, I was enchanted with the design and synthesis of new materials, especially organic materials.

I started my career in Professor Yano’s laboratory at Nara Women’s University, Japan. His research area is the coordination chemistry of carbohydrate and its medicinal applications, such as anti-cancer drugs. When I worked with him, I recognised the potential of carbohydrates in medical applications. Currently, polyethylene glycol (PEG) is the first choice for water-soluble and biologically compatible polymers for drug delivery applications. In the future, I would like to make glycopolymer a functional alternative to PEG following a recently developed, controlled polymerisation technique.

My colleagues and I recognise that Polymer Chemistry is a high quality journal in this area.

I hope to attend the 2015 International Chemical Congress of Pacific Basin Societies (PACIFICHEM 2015).

My wife and I love arts, especially 17th century Dutch painting, and animals (we love cats and dogs, and she deeply loves penguins!). However, it is not easy to see such masterpieces in Japan…

Even if I had not become a chemist, I would maybe have worked as a scientific engineer. I have never imagined joining any other kind of profession.

Cyrille Boyer is a guest web-writer for Polymer Chemistry. He is currently an Associate Professor and an ARC-Future Fellow in the School of Chemical Engineering, University of New South Wales (Australia).

One Response to “Author of the Month: Prof. Makoto Obata”