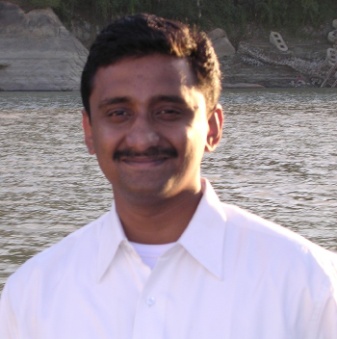 Professor Parameswar K. Iyer received his B.Sc. (Chemistry) in 1993 and his M.Sc. (Organic Chemistry) in 1995 at Bhavnagar University. He completed his Ph.D. in 1999 working at the Central Salt and Marine Chemicals Research Institute, Bhavnagar, India working on asymmetric catalysis. He worked as a postdoctoral fellow at Technion, Israel (1999-2001), University of California Santa Barbara (2001-2003) and at Case Western Reserve University, Cleveland (2003-2004). He then joined the Indian Institute of Technology Guwahati as an Assistant Professor in July 2004. In 2008 he was promoted as an Associate Professor and then a full Professor in January 2013. Professor Iyer currently leads a Research Group at the Department of Chemistry and Center for Nanotechnology at IIT Guwahati of ~10 people. His research interests involve the development of novel conjugated polymer and macromolecular structures, their application in optoelectronic devices, chemical and biological sensors and extension to therapeutics.

As a high school student I had intense curiosity and found science practical, especially chemistry and biology, highly exciting and I used to look forward to it. This interest was further enhanced when I used to visit Central Salt and Marine Chemicals Research Institute (CSMCRI), Bhavnagar, India that used to be in close proximity to my home. Hence, I chose chemistry as my further line of study. I was also fortunate to work at this laboratory for my graduate (PhD) thesis work under the guidance of Dr. Rukhsana I. Kureshy that kindled my interest in chemistry. I realized with time that being a teacher along with being a chemist is much more interesting since this provided immense opportunities to interact with young bright minds.

Over the years I observed that Polymer Chemistry publishes high quality work on several aspects of polymers and their interdisciplinary applications. We have been working for the past few years on the development of conjugated polymer systems with diverse applications in sensors and diagnosis and had an aim of extending these systems to therapeutics. We have developed a number of polymer and oligomer based systems that had diagnosis potential for neurological disorders. The key advantage of the system reported in the present article is that these materials can be prepared by an easy polymerization method, it is non toxic and it can bind toxic metals such as iron and iron containing metalloproteins at varying pH conditions in biological media at extremely low concentrations. This motivated us to use this system to probe metal traces in cerebrospinal fluid (CSF) having amyloid beta (Ab) that add to the toxicity enhancement. The binding of metal in CSF with the help of this new polymer based material disrupted the Ab instantly. With the low levels of detection that were possible with this polymer, the early diagnosis and therapeutic applications of this polymer for Alzheimer’s disease and other neurological disorders are huge.

Although Polymer Chemistry was a new journal, it has established itself as a top journal in polymer chemistry. I have known from colleagues that the reviewer comments received from Polymer Chemistry were very helpful and criticisms allowed improvement of the manuscript. I experienced the same as my colleagues, and found that this also encouraged me and my students to carry out the revisions with great enthusiasm, drawing praise from reviewers. I also found that the rapid review and publication time and wide readership were very helpful.

I am planning to attend http://www.kjf-icomep2013.org and http://www.icsm2014.fi/ conferences. I am also organizing the 3rd International Conference on ‘Advanced Nanomaterials and Nanotechnology” (ICANN-2013) at the Indian Institute of Technology Guwahati (IITG), India, which will take plade between December 1-3, 2013.

When I am not at work, I am either at the athletics track or at basketball courts which helps me stay fit physically and mentally. Besides sports, I love cooking, gardening and photography.

It’s easier to tell what I would not have become than what I would have. As an undergraduate student, I was inclined to join Air force due to my NCC activities. Being a sports coach would also have been a good career option.

Professor Iyer’s peper was recently featured as the Paper of the Week.