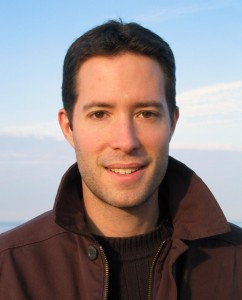 Julien Nicolas graduated in 2001 from the “Ecole Supérieure de Chimie Organique et Minérale (ESCOM)” (Cergy-Pontoise, France). He completed his PhD in 2005 under the supervision of Prof. Bernadette Charleux at the University Pierre and Marie Curie (Paris), where he studied nitroxide-mediated polymerization in homogeneous and aqueous dispersed media. Then, he joined the group of Prof. David M. Haddleton at the University of Warwick (United-Kingdom), for a postdoctoral fellowship to design polymer-protein bioconjugates by controlled/living radical polymerization. In 2007, he was appointed permanent CNRS researcher in the group of Prof. Patrick Couvreur, University Paris-Sud (France), where his current research activities are focused on the controlled/living radical polymerization and on the synthesis of novel (bio)polymers and nanoparticles for drug delivery purposes. Please follow the links for more information about Julien Nicolas and his recent paper in Polymer Chemistry.

I think it all started with my family as my father is a professor of Biochemistry at the University Pierre and Marie Curie, here in Paris. When I was a child, he often brought me to his laboratory; so almost from the beginning, I’ve been used to the lab environment and scientific research. Actually, this is the place where I did my first (polymer!) experiment: plunging a rubber band into liquid nitrogen… At that time, I had no clue about what was going on… Thus, quite rapidly at school, I decided I would work in chemistry. Perhaps also because during secondary school, caring teachers used to give me chemicals to do some experiments in my homemade chemistry lab at home (I think I never told my mother I distilled her perfume by the way…). Then, more seriously, I had the chance to meet great polymer chemists, such as J.-F Pierson, B. Boutevin, B. Charleux and D. M. Haddleton, who guided and inspired me in the field of polymer science.

What was the motivation behind the research in your recent Polymer Chemistry paper? (DOI: 10.1039/c1py00028d)

When Dr. Benjamin Le Droumaguet and I were writing our review about bioconjugates (DOI: 10.1039/B9PY00363K), it was astonishing to see how poor the literature was for biomaterials deriving from nitroxide-mediated polymerization. Taking into account the inherent features and main strengths of NMP, there was in my opinion a gap to fill in, especially in the field of polymer-protein bioconjugates. Then, we basically took inspiration from pioneering works in the bioconjugate area and developed a suitable bioconjugation platform via NMP, by putting together various achievements from ourselves and our colleagues (e.g., functional alkoxyamines, copolymerization with methacrylates, cytotoxicity of NMP-deriving polymers etc). In the near future, I wish to continue to develop novel biomaterials deriving from controlled/living radical polymerization, and especially from NMP.

When I first heard about the launch of a polymer journal from RSC, I thought it was a brilliant idea and a kind of missing link between Chem. Commun., Soft Matter and J. Mater. Chem. I really feel confident that it will soon become one of the leading polymer journals.

This year will be really exciting as I will be attending the International Nanomedicine Conference in Sydney and the ACS Meeting in Denver. But this time, I’m not going to miss my flight back from Australia, as I did in 2009 after the PPC11 2009!

I mostly spend my spare time travelling and doing exciting road trips with my wife. Among them: Portugal, Scotland, Japan and Canada. Enjoying the breathtaking Scottish highlands and fishing for salmon in the Canadian wilderness are among my best trip memories.

Tough question. Actually, I would have liked to be a veterinarian or a computer programmer (my nerd side I guess!), although it is not completely disconnected from science. Otherwise, I think that a job where you create things with your hands, such as a cabinet-maker, would have suited me.