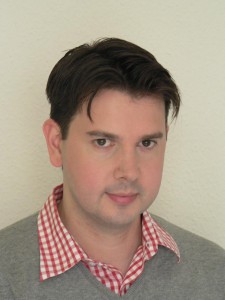 Jean François Lutz has been focusing on the preparation of sequence controlled polymers using controlled living polymerization and click reaction techniques. He has recently moved to Strasbourg and his research group “Precision Macromolecular Chemistry” will explore the interfaces between conventional synthetic polymer chemistry, organic chemistry and biochemistry.

Read further information on his research group and also scroll down to read our short conversation on his recent published in Polymer Chemistry.

My family. I had the chance to grow up in an intellectually-rich environment. My father was the president of the French Biophysical Society and my mother was in the scientific headquarters of Rhodia, which is one of the largest French chemical companies. As a child, I have been following my parents in conferences worldwide. So, I really grew up in it!

What was the motivation behind the research in your recent Polymer Chemistry paper?

My group was always very influenced by the chemistry of K. Barry Sharpless at Scripps. Thus, we got interested quite early in copper-catalyzed azide-alkyne cycloadditions (CuAAC), which are now very popular in polymer science. Lately, we also got interested in nitrile oxide-alkyne cycloadditions (NOAC). Sharpless and Fokin demonstrated that these reactions are pretty straightforward. They are certainly not as versatile as CuAAC but they present some interesting advantages. Thus, it was tempting to import these reactions in the field of polymer science. In our paper, this chemistry was studied in collaboration with Frances Heaney who is a talented Irish organic chemist.

I think that Polymer Chemistry is on the right track to become the number one journal for original research papers in the field of polymer science. I am actually very proud to be an Advisory Board member of Polymer Chemistry.

Could you please tell us about your new Institute in Strasbourg and your research plans?

Working in Strasbourg was always a dream for me. This is definitely the strongest place for Chemistry in France. There is so many world-leading scientists in this city: Jean-Marie Lehn, Jean-Pierre Sauvage, Thomas Ebbesen, Jean-Paul Behr, Pierre Braunstein, Gero Decher and many others. This is indeed a great privilege to interact with such influential scientists. This will certainly have an impact on my future research.

I will be giving a series of lectures in Japan in April. Afterwards, I’ll be attending conferences in Brazil (FBPol 2011), USA (Fall ACS national meeting), Germany (Smart Polymer Systems Conference 2011) and Turkey (APME 2011).

Playing LEGO with my son.

If I would not be a scientist, I would probably own an antique book-shop or be a museum curator. I cannot imagine to live without having knowledge around me.