Introducing Journal of Materials Chemistry A, B and C Editor-in-Chief Nazario Martin

We are delighted to introduce the new Editor-in-Chief of Journal of Materials Chemistry A, B & C, Professor Nazario Martin. 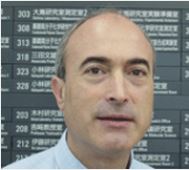 Professor Martin completed his doctorate at the Universidad Complutense de Madrid, Spain, where he is a full professor of Organic Chemistry and vice-director of the Institute for Advanced Studies in Nanoscience of Madrid (IMDEA-Nanoscience). Recently he has been appointed as Dr. h.c. by La Havana University.  He is a member of the Royal Academy of Doctors of Spain and a fellow of The Royal Society of Chemistry and in 2006-2012 he was the President of the Spanish Royal Society of Chemistry.

He was the recipient of the “Dupont Prize of Science” in 2007 and of the “Gold Medal and Research Award” in 2012, the highest distinction given by the Spanish Royal Society of Chemistry and he was appointed with the national “Jaime I Award for basic research” 2012. He is the last chemist distinguished with the “EuCheMS Lecture Award” in 2012. More recently, he has received two prestigious international prizes, namely the Alexander von Humboldt Award (Germany) and the Richard E. Smalley Award de la Electrochemical Society (USA)

Nazario’s research interests span a wide range of topics with an emphasis on the molecular and supramolecular chemistry of carbon nanostructures such as fullerenes, carbon nanotubes and graphenes, Π-conjugated systems as molecular wires and electroactive molecules, in the context of electron transfer processes, photovoltaics applications and nanoscience.  He has published over 450 papers in peer reviewed journals, given over 300 lectures in scientific meetings and research institutions, and supervised 29 theses and co-edited 6 books including:

We would like to take this opportunity to thank the outgoing Editor-in-Chief, Professor Dongyuan Zhao, for his direction during the last two and a half years. Professor Zhao is stepping down as he has been appointed as an Associate Editor for ACS Central Science.