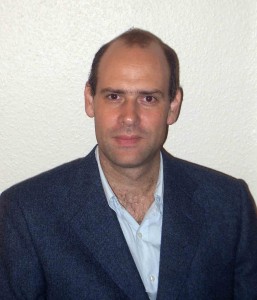 1. Which research projects are you working on at the moment?
We are trying to integrate multiple functions in a single organic-based electronic device. In other words, we are attempting to fabricate devices like field-effect transistors that can respond simultaneously to multiple yet independent stimuli. This can be achieved by developing multi-component nanostructured materials.

2. What motivated you to focus on nanoscale architectures?
During my undergraduate studies the world of the single molecules was left mostly to theoretical predictions or even to imagination. During my thesis work, about 18 years ago, I started “playing” with the Scanning Probe Microscopies. These very powerful Microscopies allowed me to really “see” the molecules, to enter their world, and to look also at their “sociology “, i.e. at the way they interact among each other on the nanoscale generating highly ordered structures at the supramolecular level.

Naturally, after several years devoted to understand and control the generation of these ordered nanostructures I became interested into learning more and more also about their properties and how one can tailor them to develop nanoscale supramolecular functional materials.

3. What are the hot topics in materials chemistry at the moment?
The greatest challenges to be addressed in materials chemistry are in the field of health and environment. In this case detection using novel highly selective and sensitive sensors is a hot topic. Other important and timely subjects are those associated to energy problems. Here the fabrication of devices for storage (e.g. batteries) or generation of energy (e.g. solar cells) is key.

4. What current problem would you like to see science provide a solution to?
Simply, materials chemistry can help us to improve the quality of our lives!

5. What do you find to be the most rewarding aspect of your career?
A scientist working in the academia can be surrounded by very inspiring, enthusiastic and highly talented students. Looking at them improving and hopefully becoming top scientist is a major reward. Another major reward is to start from a crazy idea and develop something novel and unforeseen at the very beginning, like a new material or a new device.

6. What’s the secret to being a successful scientist?
Listen to people and learn a lot from them, in particular from the most talented students and colleagues I encountered during my 18 years I have been in science. Then passion, perseverance and rigor are key ingredients to the success.

7. Which scientist past or present do you most admire?
I admire Luigi Galvani, also a Bologna’s heritage, because his findings on the relationship between electricity and life are truly astonishing and still stimulating, after 250 years, many studies on biomaterials and biofunctional systems. I also admire Richard Feynman who could foresee the nanoscale science and technology much before any instrument to explore matter on that scale was made available.

8. If you weren’t a scientist, what would you be?
Anything that would provide me freedom to express my creativity.

If you’re interested to learn more about research in the Samorì lab you can read a selection of papers below or check out their research pages on the group website.

Paolo Samorì (Imola, Italy, 1971) is full professor (PR1) and director of the Institut de Science et d’Ingénierie Supramoléculaires (ISIS) of the Université de Strasbourg (UdS) where he is also head of the Nanochemistry Laboratory. He is also Fellow of the Royal Society of Chemistry (FRSC) and junior member of the Institut Universitaire de France (IUF). He obtained a Laurea (master’s degree) in Industrial Chemistry at University of Bologna in 1995. In 2000 he received his Ph.D in Chemistry from the Humboldt University Berlin (Prof. J.P. Rabe). He was permanent research scientist at Istituto per la Sintesi Organica e la Fotoreattività of the Consiglio Nazionale delle Ricerche of Bologna from 2001 til 2008, and Visiting Professor at ISIS from 2003 til 2008. He has published >160 papers on applications of scanning probe microscopies beyond imaging, hierarchical self-assembly of hybrid architectures at surfaces, supramolecular electronics, and the fabrication of organic-based nanodevices. His work has been awarded various prizes, including the young scientist awards at EMRS (1998) and MRS (2000) as well as the IUPAC Prize for Young Chemists 2001, the Vincenzo Caglioti award 2006 granted by the Accademia Nazionale dei Lincei, the “Nicolò Copernico” award 2009 (Italy) for his discoveries in the field of nanoscience and nanotechnology, the prix “Guy Ourisson” 2010 du Cercle Gutenberg, the ERC starting grant 2010 and the Silver Medal of CNRS 2012. He is member of the advisory boards of Advanced Materials, Small, ChemPhysChem and ChemPlusChem (Wiley-VCH), Journal of Materials Chemistry and Nanoscale (RSC).

Don’t forget to keep up-to-date with all the latest research you can sign-up for the Journal of Materials Chemistry RSS feed or Table of contents alert.