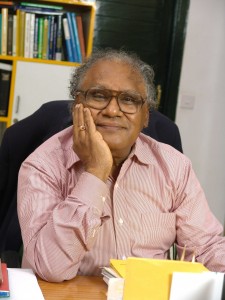 1. Which research projects are you working on at the moment?
I have been working on materials chemistry for more than 50 years. One of the main areas of my research has been transition metal oxides. I have investigated superconductivity, colossal magnetoresistance and a variety of phenomena associated with metal oxides. In the last few years, my main interest has been multiferroic and magnetoelectric oxides. Another important area of interest is nanomaterials where I have been working on carbon nanotubes as well as graphene extensively in the last few years. One of my specialities is nanotubes and graphene-like materials of (non-carbon) layered inorganic materials. I am interested in inorganic and organic hybrid materials as well.

3. What are the hot topics in materials chemistry at the moment?
Materials chemistry is broad in scope. It is also interdisciplinary. I would be wrong in picking one or two hot topics. I, however, list some of the important topics according to me. There is lot to be worked on layered materials as well as atomic layer position of very thin layers of oxides and other materials. Materials related to energy should be pursued vigorously and these should include not only battery materials, fuel cells and so on, but also materials related to capture of carbon dioxide and methane and to production and storage of hydrogen.

4. What current problem would you like to see science provide a solution to?
I feel that problems must be related to energy and environment are the ones that we have to solve for mankind to survive. I would say hydrogen production and storage would be one of the important areas.

5. What do you find to be the most rewarding aspect of your career?
Doing science has been wonderful. It has really kept me young. Though I have been doing research for sixty years, I feel excited by research even now. I think that doing science itself is the greatest reward. What is particularly nice has been working with a large number of young students.

7. Which scientist past or present do you most admire?
The scientist I most admire is Michael Faraday. In the 20th century, it would be G. N. Lewis followed by Linus Pauling.

If you’d like to learn more about Professor C. N. R. Rao’s research you can read some of his latest articles here:

Biography
Prof. C.N.R. Rao (born on 30 June 1934, Bangalore, India) is the National Research Professor as well as Honorary President and Linus Pauling Research Professor at the Jawaharlal Nehru Centre for Advanced Scientific Research.  He is also an Honorary Professor at the Indian Institute of Science.   His main research interests are in solid state and materials chemistry.   He is an author of over 1400 research papers and 45 books.  He received the M.Sc. degree from Banaras, Ph.D. from Purdue, D.Sc. from Mysore universities and has received honoris causa doctorate degrees from 53 universities including Purdue, Bordeaux, Banaras, Delhi, Mysore, IIT Bombay, IIT Kharagpur, Northwestern, Notre Dame, Novosibirsk, Oxford, Stellenbosch, Grenoble, Uppsala, Wales, Wroclaw, Caen, Khartoum, Calcutta, Sri Venkateswara University and Desikottama from Visva-Bharati.

Among the various medals, honours and awards received by him, mention must be made of the Marlow  Medal  of the Faraday Society (1967), Bhatnagar Prize  (1968), Padma Shri (1974), Centennial Foreign Fellowship of the American Chemical Society (1976), Royal Society of Chemistry (London) Medal (1981), Padma Vibhushan (1985), Honorary Fellowship of the Royal Society of Chemistry, London (1989), Hevrovsky Gold Medal of the Czechoslovak Academy (1989),  Blackett Lectureship of  the  Royal  Society (1991),  Einstein Gold Medal of UNESCO (1996), Linnett Professorship of the University of Cambridge (1998),  Centenary Medal of the Royal Society of Chemistry, London (2000), the Hughes Medal of the Royal Society, London, for original discovery in physical sciences (2000), Karnataka Ratna (2001) by the Karnataka Government, the Order of Scientific Merit (Grand-Cross) from the President of Brazil (2002), Gauss Professorship of Germany (2003) and the Somiya Award of the International Union of Materials Research (2004).  He is the first recipient of the India Science Award by the Government of India and received the Dan David Prize for science in the future dimension for his research in Materials Science in 2005. He was named as Chemical Pioneer by the American Institute of Chemists (2005), Chevalier de la Légion d’Honneur by the President of the French Republic (2005) and received the Honorary Fellowship of the Institute of Physics, London (2006) and St. Catherine’s College, Oxford (2007).  He received the Nikkei Asia Prize for Science, Technology and Innovation (2008).  He was awarded the Royal Medal by the Royal Society (2009) and the August-Wilhelm-von-Hoffmann Medal for his outstanding contributions to chemistry by the German Chemical Society (2010).  He received the Ernesto Illy Trieste Science Prize for materials research in 2011.

Prof. Rao is Chairman, Scientific Advisory Council to the Prime Minister, immediate past President of The Academy of Sciences for the Developing World (TWAS) and Member of the Atomic Energy Commission of India.  He is Founder-President of both the Chemical Research Society of India and of the Materials Research Society of India.  Prof. Rao was President of the Indian National Science Academy (1985-86), the Indian Academy of Sciences (1989-91), the International Union of Pure and Applied Chemistry (1985-97).  He was the Director of the Indian Institute of Science (1984-94), Chairman of the Science Advisory Council to Prime Minister Rajiv Gandhi (1985-89) and Chairman, Scientific Advisory Committee to the Union Cabinet (1997-98) and Albert Einstein Research Professor (1995-99).