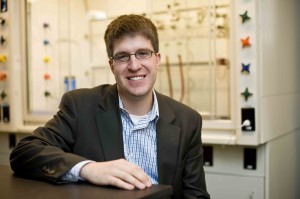 Samuel Thomas is an Assistant Professor of Chemistry at Tufts University, a position he has held since 2009.  He earned a B.S. in Chemistry in 2000 from the University of Rochester.  After a year-long stint at the Eastman Kodak Company as a research chemist, he entered graduate school at MIT.  He received his Ph.D. in organic chemistry in 2006 under the guidance of Prof. Timothy Swager.  From 2006-2009, he was an American Cancer Society postdoctoral fellow in the laboratory of Prof. George Whitesides at Harvard University.  Since starting his independent career at Tufts, Sam has been the recipient of a 2009 DARPA Young Faculty Award, a 2010 Thieme Publishers Journal Award, and a 2012 NSF CAREER Award.  His research focuses on using physical organic chemistry to design new photoresponsive materials for applications in self-assembly, sensing, and patterning.

1. Which research projects are you working on at the moment?
We work on three main projects in the area of photo-responsive organic materials: 1) Photochemical tuning of properties of conjugated polymers, 2) new applications of singlet oxygen chemistry, and 3) photochemical control of electrostatics.

2. What motivated you to focus on photo-responsive organic materials?
Light is such a versatile reagent.  It gives you real-time control over stoichiometry, energy, and spatial distribution.  It’s thrilling to exert that type of control over organic reactions, and use that control for inventing materials that do new things.

3. What are the hot topics in materials chemistry at the moment?
The rational design of condensed phase behavior from chemical structure

4. What current problem would you like to see science provide a solution to?
Two things: 1) The energy problem; 2) Increasing the possibility of science as a career for more people.

5. What do you find to be the most rewarding aspect of your career?
In terms of experiments, I live vicariously through the students who work in my lab.  Sharing the excitement of discovery with them is a real joy.

6. What’s the secret to being a successful scientist?
Passion and dedication…when an experiment or idea doesn’t work, coming back even more determined to solve the problem!

7. Which scientist past or present do you most admire?
A tie between Pasteur and Faraday.  Pasteur for the meticulousness of separating tartaric acid enantiomers by hand, and Faraday for amazing versatility and experimental genius.

8. If you weren’t a scientist, what would you be?
A musician.  I played the piano constantly as a teenager.

If you’re interested to know more about the Thomas lab’s research you can check out the group website or alternatively you can see a few of their recent papers below: