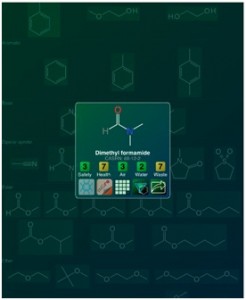 Screenshot of the Green Solvents App for iPad

Several new mobile applications (Apps) have been recently released for the Apple iOS platform which incorporate green chemistry concepts. This represents a highly novel way to communicate science and bring green chemistry to a bigger audience, which has not previously been appreciated. We certainly sense there is an untapped audience for these types of applications due to the large number of people who now own a mobile device across all demographics. Green Chemistry related information is generally proprietary and papers on the topic are commonly behind paywalls. Making the information freely available or at low cost is a paradigm shift.

For example, a recent consortium organized by the American Chemical Society Green Chemistry InstituteTM (ACS GCI) Pharmaceutical Roundtable1 currently involves 14 pharmaceutical companies, and has developed a solvent selection guide that is publicly available on their website in the form of a PDF file.2 We have made this solvent selection guide more accessible in the form of a free app called Green Solvents.3, 4 It is delivered as a simple structure look-up guide incorporating all of the selection criteria from the ACS GCI and, in addition, having links out to other useful resources (ChemSpider 5-7 etc.). This app, like most free apps, has a small banner advertisement which does not detract from the content of the app or its usability on a mobile device. Importantly this App was not funded by the ACS or any other organization. 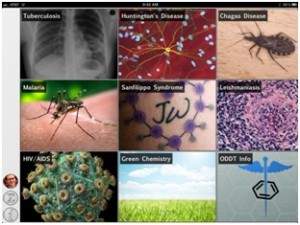 Screenshot of the Open Drug Discovery Teams App for iPad

Creating the Green Solvents app has also motivated the addition of the process mass intensity (PMI) calculation8 (which is another green chemistry feature), into the Yield101 app9. A third recently developed mobile app connected to green chemistry is the Open Drug Discovery Teams (ODDT) app10, 11. ODDT is a free mobile app intended as a research topic aggregator of science data collected from various sources on the internet such as Twitter and Google Alerts. It exists to facilitate interdisciplinary teamwork and deliver access to information that is highly relevant and focused on the topic areas of interest. Research topics include areas of chemistry and adjacent molecule-oriented biomedical sciences, with an emphasis on those which are most amenable to open research at present. We have focused on green chemistry as a topic due to its potential importance for scientists involved in drug discovery for rare and neglected diseases. There is high attrition in drug discovery, so many compounds will need to be made but only a very small fraction will make it into the clinic and, far less, into the marketplace. It is therefore important to design a green process as early as possible when the cost is lower and the quantities of chemicals made are relatively small compared to when they are dramatically scaled up for manufacturing. We feel these global neglected and rare disease researchers would benefit greatly from being informed about green chemistry principles early on and that this has not been considered by any of the major organizations driving green chemistry initiatives. This app has also been used to visualize the ACS GCI solvent selection guide in a different format as it was Tweeted out to reach an even wider audience for those following the hashtag #greenchemistry. To date we are the only researchers that have created and used mobile apps to communicate green chemistry concepts. We feel this is an area that is ripe for expansion to further educate scientists.