It is with great pleasure that we announce Prof. Daeyeon Lee (University of Pennsylvania, USA) as the recipient of the 2017 Soft Matter Lectureship.

The Soft Matter Lectureship is an annual award that honours an early-career researcher for their significant contribution to the soft matter field. The recipient is selected by the Soft Matter Editorial Board from a list of candidates nominated by the community.

Read on to find out more about Daeyeon… 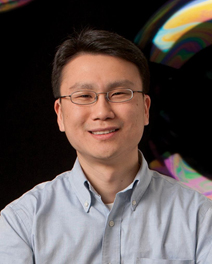 Daeyeon Lee obtained his PhD in Chemical Engineering at the Massachusetts Institute of Technology (MIT) in 2007 after completing a Bachelor’s Degree at Seoul National University in 2001. He then moved to Harvard University for a postdoctoral fellowship, before becoming a Professor of Chemical and Biomolecular Engineering at the University of Pennsylvania in 2009.

His current research interests focus on developing a deep understanding of the interactions between soft materials (e.g., polymers, colloids and biologicals, etc.) near or at interfaces. The major research efforts of his group include understanding the behaviour of Janus particles at fluid interfaces, improving the assembly and mechanical properties of nanoparticle films, generating hierarchical structures using emulsions and bubbles as templates, and developing catalytic systems for biomass conversion.

Since 2005, Prof. Lee has received 14 honours and awards and published 117 peer-reviewed articles. He received the Gold Award in Materials Research Society (MRS) in 2006, the AIChE NSEF Young Investigator Award in 2013, and the S. Reid Warren, Jr. Award in 2017, in recognition of outstanding service in stimulating and guiding the intellectual and professional development of undergraduate students.

To learn more about Daeyeon’s research, have a look at his recent publications in Soft Matter:

Please join us in congratulating Daeyeon on his award!

From a 4kg cat to a 4000kg elephant, any animal takes only around 12 seconds to ‘do their business’. This is what a team of US scientists found after thoroughly studying the process of defecation in over 40 animal species. They then developed a theoretical fluid dynamics model that shows how viscosity changes in faecal mucus ease excretion.

Source: © RSC
The relationship between body mass and defecation time

Despite being extensively studied from a clinical and medical perspective, the physics of pooing has until now escaped extensive exploration.

Inspired by a slow motion video of a defecating elephant obtained during their previous work on urination, David Hu and his team from Georgia Institute of Technology acquired similar videos of other mammals ranging from dogs to giant pandas. They found that despite obvious differences in animals’ size and diet, defecation time averaged to around 12 (±7) seconds across all of the species they looked at.


Read the full story by Charlie Quigg in Chemistry World.

Researchers in Canada have shrunk bubbles to single-micrometre diameters, suitable for use in ultrasound. 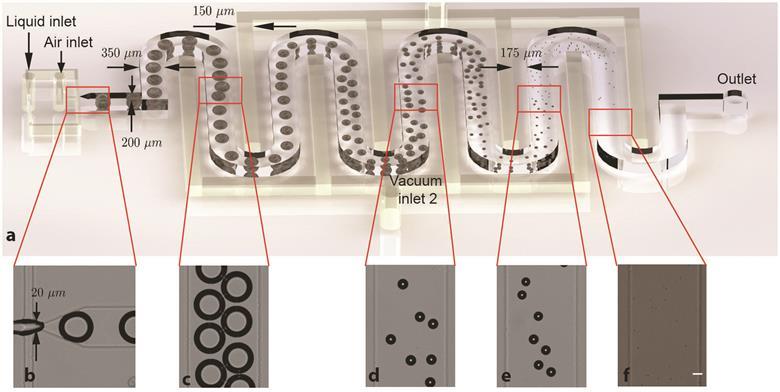 Source: Royal Society of Chemistry
Bubbles shrink down to 1–7µm in diameter as they flow through the device’s serpentine microchannel

The bubbles needed for ultrasound are around 2µm in diameter. Current microfluidic techniques cannot produce bubbles this small, and the techniques used to generate these microbubbles generally use physical agitation or shearing. The bubbles produced often have a large size distribution, and filtration is needed to separate out those suitable for use.

Read the full story by Laura Fisher in Chemistry World.

Chinese scientists have used conducting carbon nanotubes and impact-responsive polymers to create a smart Kevlar composite with enhanced ballistic and stab resistance. Body armour made from this material could sense the force and location of impacts, and detect when it has been pierced.

Flexible, lightweight and durable, Kevlar has been a key component in personal armour for decades. It has excellent stab and cut resistance, making it the primary component in police stab vests, also offering limited protection against small arms fire.

The problem with Kevlar’s flexibility is that when it stops a bullet, the energy is still transferred directly to the wearer at the point of impact, which causes trauma – imagine being punched at the speed of a bullet! For military applications, where Kevlar would not stand up to high-velocity rifle rounds, it is often combined with heavier steel or ceramic plates to spread the impact over a larger area.

Read the full story by Will Bergius in Chemistry World.

Shape memory polymers get a grip

Researchers in the US have developed a new way to curl polymer sheets to create a variety of 3D structures.

Shape memory polymers change shape in response to external stimuli such as light and heat. Chemists add active materials to polymer sheets, which then deform on stimulation. Usually the active materials are placed in regions where curvature is desired, but Michael Dickey, Jan Genzer and their colleagues at North Carolina State University have now shown they can deform regions adjacent to the active materials. 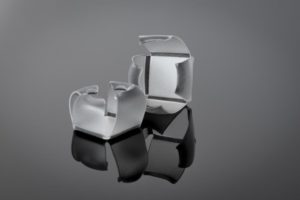 Read the full story by Laura Fisher in Chemistry World.

Winners of the Soft Matter award at the Polymer Gel Symposium

The 28th Symposium organized by the Research Group on Polymer Gels, The Society of Polymer Science, Japan was held on 16,17th January 2017, in Tokyo, Japan.


This is the third year in a row that Soft Matter supported this event, which has been continuously very well received.

The winners of the price will receive a free subscription to Soft Matter. 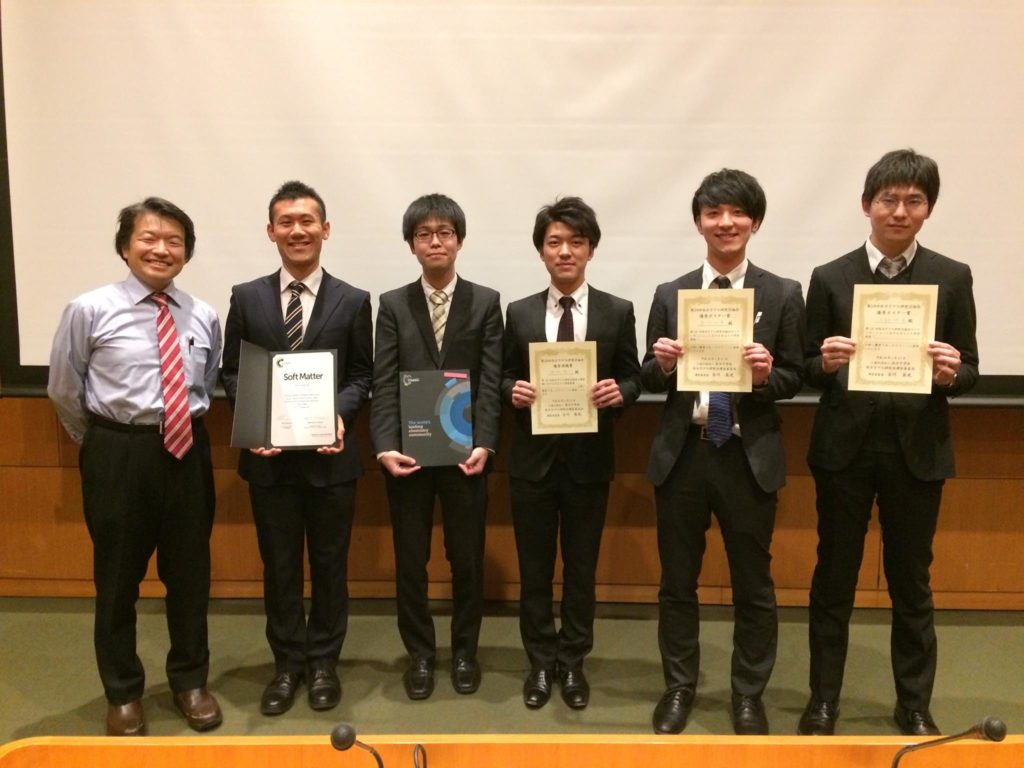 On the image, from the left

Mr Honma’s poster was titled: “Micro Patterning of the Self-Oscillating Polymer Brush for Control of its Spatio-temporal Function”


Congratulations to all winners!


This summer, the Global Station for Soft Matter, GI-CoRE from Hokkaido University will hold a two-week long “Summer School on Soft Matter” for graduate students and early career researchers. This summer school will focus on polymer physics, soft matter mechanics, and chemistry and characterization of materials. The seminar will be divided into two sessions. The first session will be held at Otaki Seminar House in central Hokkaido, located about 20 km from the beautiful Lake Toya. The second session will be held at the Sapporo Campus of Hokkaido University. The seminar will be held by world-leading scientists in the field of soft matter.

Apply now for this exciting seminar!

How to not make a splash


New research by a scientist in the US can better explain how a droplet splash is dictated by the smoothness of a surface, as well as the surrounding air pressure.

Scientists already knew that two aspects were involved in this seemingly simple process; one related to the surrounding air, and the other to how the liquid spreads on the substrate. ‘If we were forced to guess, we’d probably assume that decreasing the ambient pressure around the drop would make the splash bigger. After all, we’re decreasing air resistance,’ explains Andrzej Latka, at the University of Chicago, who performed the new research.


Read the full story and watch the video showing the splash in Chemistry World. 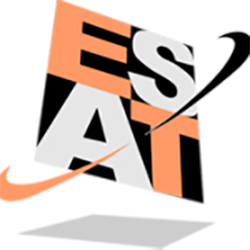 The European Symposium on Applied Thermodynamics (ESATB) was founded in 1974 by Professor Helmut Knapp in order to bring together researchers from academia and industry from all over the world.

The ESAT2017 conference aims to cover new experimental achievements, prediction of thermophysical properties of complex systems, molecular and statistical thermodynamics, molecular modeling and simulation. The conference offers the opportunity to present state-of-the-art research on various topics and aims to generate fruitful scientific discussions and collaborations. Plenary lectures, oral presentations and poster sessions will make sure that this interaction is made. The ESAT conference is organized in cooperation with the Working Party on Thermodynamics and Transport Properties: the EFCE Excellence award will be granted on that occasion to an young researcher who has contributed significantly to the field.
A special session will be hosted on Teaching Thermodynamics.

On behalf of the Soft Matter Editorial Board, with the help of jury members, we are delighted to announce Mr. Raj Kumar Manna, from Complex Fluid & Biological Physics Lab IIT Madras, India, as the winner of the “Best Poster Prize” by Soft Matter at ICSM 2016 for his poster on “Colloidal transport by active filaments”. Congratulations! 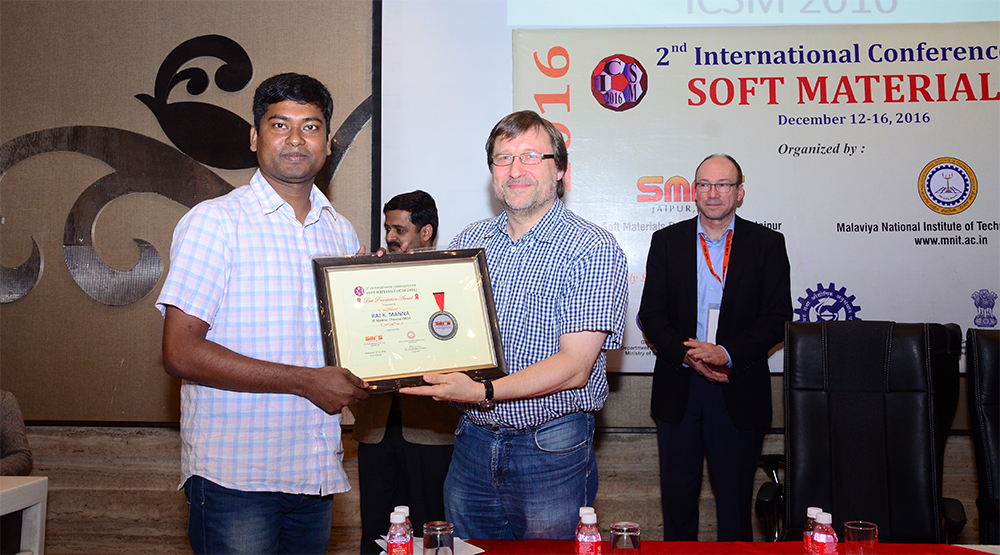 We would like to thank the organisers of ICSM 2016 for their collaboration with the award ceremony.

Please join us in congratulating Raj in his fantastic achievement!