Hot article: Evaporation-induced alignment of nanorods in a thin film

For many products such as paints, inks, or cosmetics, the evaporation of water or another solvent is one of the key stages of their application. It not only serves as the medium in which all the other formulation ingredients are dispersed, but also plays a role in what the final structure of the dried product will be and therefore determines its properties. As the product dries, the air/water interface can trap some of the particles resulting in an enrichment of that ingredient at the top of the dried surface, or hydrodynamic phenomena can result in convection flows that recirculate the ingredients to obtain a more homogenous dried product. How these phenomena affect the different ingredients is also influenced by their shape, i.e. whether they are spherical, rod-like, cube-like, or others. In the case of particles with a preferential direction, such as rods, they might have a strong tendency to align parallel to the air/water interface to minimize their energy. 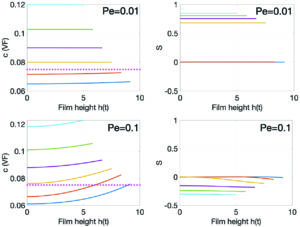 In this publication, the authors simulate the drying process of a dispersion containing rod-like particles to obtain insights on the effect of different parameters on their final orientation in the dried film. They investigate how and when the transitions in orientation take place, providing useful guidance for the optimization of systems which involve rod-shaped particle such as gold or zinc oxide nanorods.