The term active matter might refer to something quite extraordinary such as, for example, dark matter. But what if I told you that such a term is used to describe very mundane things, such as flocks of birds or schools of fish? 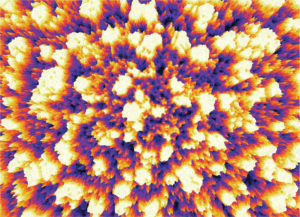 In this publication the authors are particularly interested in the less explored case in which two active components – faster and slower particles – are mixed. This would correspond, for example, to a mixture of bacteria with different speeds; or, in the macroscopic world, a scenario where zebras are being hunted by lions. They carry out Brownian dynamics simulations adapted to active matter, to find out that a segregation into condensed and gas-like phases, each composed of both fast and slow particles, takes place in such systems. Moreover, the composition of the condensed phase is highly dependent on the difference of activity between the two components. When the difference in speed between fast and slow particles is significant, the core of the condensed phase is composed of slow particles and the fast particles remain in the outer shell. If the speed is similar, then fast particles can be found as well as slow particles in the core of the condensed phase. The insights presented in this work are valuable to understand further multicomponent active matter already present in Nature or to engineer new active systems and harness the potential of their complex behaviour for diverse applications.

Did you know that Soft Matter has an Active Matter themed collection? Click here to check out more papers!