We are delighted to announce Professor Lucio Isa (ETH Zurich) as the 2015 Soft Matter Lectureship winner.

The Soft Matter Lectureship is an annual award that honours an early-stage career researcher for their significant contribution to the soft matter field. The recipient is selected by the Soft Matter Editorial Board from a list of candidates nominated by the community.

Read on to find out more about Lucio… 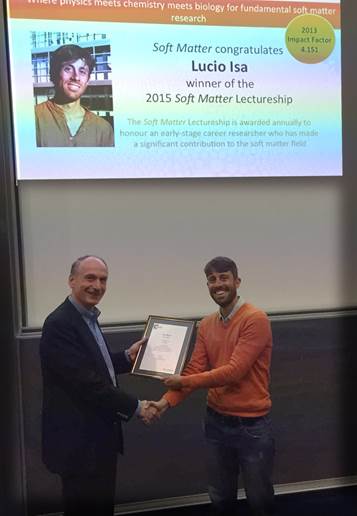 Lucio was presented with his 2015 Soft Matter Lectureship award at the end of his talk at the SoftComp Topical Workshop – Dense Suspension Flow held at the University of Edinburgh on 1-3 June 2015 by Soft Matter Associate Editor Dimitris Vlassopoulos.

Professor Dr Lucio Isa was born in Milan (Italy) in 1979. In 2004 he completed his university studies in Nuclear Engineering with a Mathematics and Physics specialisation at the Milan Polytechnic, obtaining a Master’s degree with honors (100/100 cum laude) with a research project on thermal diffusion of colloidal suspensions with Professor Roberto Piazza. He then moved on to obtain a PhD in Soft Matter Physics at the University of Edinburgh in 2008 (Professor Wilson Poon) where he worked on flow and deformation of dense colloidal glasses. His PhD work was awarded on two occasions (Marie Curie Early Stage Researcher 2007 Award and the British Society of Rheology 2008 Vernon Harrison Award for the most outstanding UK PhD rheology thesis in the academic year 2007/2008). After a short postdoctoral spell in Edinburgh, he moved to the Materials Department of ETH Zurich at the end of 2008 to work on self-assembled materials in the Laboratory for Surface Science and Technology (Professors Nicholas D. Spencer and Marcus Textor). During his time at ETH Zurich he was awarded a Marie Curie Postdoctoral Fellowship, an SNSF travel grant as visiting scientist to the University of California Santa Barbara (Professor Todd Squires) and an SNSF Ambizione Fellowship aimed at studying various aspects of micro and nanoparticle self-assembly at liquid interfaces.

Since 1st September 2013 he has been head of the Laboratory for Interfaces, Soft matter and Assembly in the Department of Materials at ETH Zurich as SNSF Assistant Professor. His current interests revolve around the basic understanding of soft materials in terms of their structural, dynamical and mechanical properties, with a specific focus on single-particle wetting and on the rheology of colloidal monolayers and dense pastes. This basic understanding is then applied to the engineering of new materials and processes, including multifunctional colloids, optically active materials and surface nanopatterning.

Professor Isa is a co-founder of Swiss Soft Days, an initiative aimed at creating a national network of scientists working in Soft Matter in Switzerland. He has published 45 peer-reviewed articles in international scientific journals to date and he is the 2015 recipient of the Soft Matter Lectureship award.

Keep your eyes peeled for Lucio’s upcoming Soft Matter article in honour of the Lectureship award.

Please join us in congratulating Lucio in his fantastic achievements by adding your comments below.