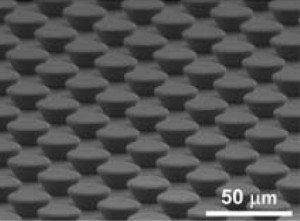 Since its birth in 2005, Soft Matter has quickly grown to be one of top (if not the top) journals in its field. The current impact factor of the journal is 4.87. In this and the next few blogs, I thought it would be interesting to explore the themes and articles being published in Soft Matter and their impact on the soft matter field. Obviously I can’t, nor would you want me to, discuss every article published in Soft Matter, so I will limit the discussion to the most cited articles (as determined by ISI Web of Knowledge). What are the hot topics? Who is writing these highly cited articles and who is citing them? In this first blog of the series, I will start with the top ten of 2010 and later the top ten of all time (well, since 2005).

At number 10… In tenth place, with 10 citations since its online publication in Feb ’10, is ‘A robust superhydrophobic and superoleophobic surface with inverse trapezoidal microstructures on a large transparent flexible substrate‘. In the article the authors Maesoon Im et al., from KAIST South Korea, demonstrate a large size flexible transparent PDMS microstructured surface, which is both oil and water repellent. Im et al. structured the surface of the PDMS to create an array of inverse-trapezoidal microstructures (see image).

Of the articles citing this work, three build on it directly. The authors look at the use of these structures for combined electrical insulation and water repellence (doi:10.1021/la101339t) and also their self-cleaning properties for potential solar cell applications (doi:10.1039/c0jm02463e). One important criterion for useable superhydrophobic surfaces is their durability. This was not discussed by Im et al. However, Su et al. have shown that similar superhydrophobic polyurethane elastomeric surfaces have high abrasion resistance, making them technologically very interesting.

This isn’t the first blog that I have written looking at superhydrophobic surfaces and it is likely not the last. Anything with the potential to make our lives easier (via self-cleaning), reduce energy consumption (via friction reduction) and enhance energy capture (by remaining dust free) is always going to be in the spotlight.

At number 9… In 9th place, also with 10 citations, is ‘Insights into the cybotactic nematic phase of bent core molecules‘. The article, written by Francescangeli and Samulski, was published online in April 2010. For those not in the liquid crystal field the term cybotactic here describes an assembly of molecules in a nematic mesophase, which are arranged in a short-range smectic-like array.

At number 8… With 11 citations, ‘Why are double network hydrogels so tough?’ makes it to number 8 in the top ten 2010. This review article by Jian Ping Gong, Hokkaido University Japan, provides an interesting overview of double network hydrogel research with particular emphasis on understanding their mechanical properties.

Hydrogels appear four times in the top ten 2010. One of the reasons for this is perhaps their suitability as artificial soft tissues, due to their high water content and high mechanical strength and toughness. From the citations to this article it can clearly be seen that there is a strong focus on enhancing the strength, durability and bonding of hyrodgels in aqueous environments. Also important for these biological applications, is that the hydrogel is biocompatible. This was highlighted in one of Gong’s most recent citations, where Bai et al. fabricated high strength fatigue resistant hydrogels with low cytotoxicity and antifouling properties. This hydrogel is not itself biodegradable.  Bai et al. claim however, that their method could be easily adapted to form a biodegradable, biocompatible high-strength hydrogel with applications for tissue engineering scaffolds.

At number 7…Since its publication in March 2010, ‘Relationship between the molecular structure, gelation behaviour and gel properties of Fmoc-dipeptides‘ has received 12 citations, putting it at number 7. The second appearance for hydrogels, the focus of this paper is on how the chemical structure of the gelator (in this cast Fmoc-dipeptides) relates to the properties of the gel formed. The number of the amino acids in the dipeptide was varied allowing the hydrophobicity of the molecule to be tuned. Depending on the hydrophobicity different types of gel were seen to form.

Of the 12 citations for this article, all looked at various aspects of dipeptide gelation. In contrast to the double network hydrogels where strength and durability were key, for this class gel formation of the gel structure is reversible. The structure in the gel arises from the entanglement of the fibres via hydrogen bonding  or π-π stacking, rather than cross-linking in the conventional sense (covalent or ionic bonding). This makes them attractive for drug release and wound treatment.

At number 6… And finally (for this blog), in 6th place is ‘Dendrons/dendrimers: quantized nano-element like building blocks for soft-soft and soft-hard nano-compound synthesis’. This tutorial review has received 13 citations since its online publication in December 2009 (not strictly 2010, but since it appears in the 2010 print edition it counts).

Tomalia defines dendrimers as “well defined collections of atoms that can be viewed as core-shell type atom mimics”. The focus of the review is to show that dendrons/dendrimers are emerging as a platform for synthetic nano-chemistry. This is reflected in the citations, which include papers on the use of dendrons/dendrimers for gene delivery, as biocompatible drug delivery vehicles, in blue LEDs and as self-assembling building blocks.