To mark the occasion of Green Chemistry completing fifteen years of publication we invited contributions from authors who have had highly cited articles from each of the past 15 years. The result is a growing web collection covering topics of current importance in green chemistry from those who have contributed to developing the field. Details of the contributors, their highly cited article from the year they are representing, and their recent contribution are below.

Two recent additions to the collection are from Professor Chinzia Chiappe (University of Pisa), and Dr Peter Dunn (Pfizer).

Professor Chiappe’s 2006  article ‘Acute toxicity of ionic liquids to the zebrafish (Danio rerio)‘ is amongst the highest that year. She has continued on this ionic liquids theme by contributing to the 15 years of Green Chemsitry collection a Critical Review asking  ‘Are ionic liquids a proper solution to current environmental challenges?‘

All of these articles are free to access until the end of July 2014. The 15 Years of Green Chemistry collection will be added to throughout 2014 and you can access the articles by clicking on the titles below, or look at the full collection of recent articles online here.

To mark the occasion of Green Chemistry completing fifteen years of publication we invited contributions from authors who have had highly cited articles from each of the past 15 years. The result is a growing web collection covering topics of current importance in green chemistry from those who have contributed to developing the field. Details of the contributors, their highly cited article from the year they are representing, and their recent contribution are below.

The 15 Years of Green Chemistry collection will be added to throughout 2014 and you can access the articles by clicking on the titles below, or look at the full collection of recent articles online here. 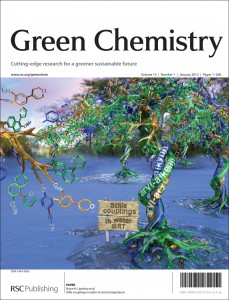 We are delighted to announce that Green Chemistry’s Impact Factor* has risen to a new high of 6.8!

Walter Leitner, Chair of the Green Chemistry Editorial Board said of the news: “Once again, the impact factor for Green Chemistry has seen a significant increase, reaching an all-time high of 6.8. This is due to the excellent research of the community and the dedication of the authors to share their exciting results, the enormous efforts by the referees to ensure the highest quality, the distinguished profile of the journal and the tremendous and exceptionally professional job of the management office! Taking the impact factor as tool (not the goal) for a journal to measure the reception of its content by the community, I think we can all be proud of this development.”

We would like to thank all our authors, referees, readers and Editorial and Advisory Board  members for their help and support on the Journal.

Read more about the 2012 Impact Factors on the RSC Publishing Blog.

Recycling old magnets, so that rare-earth metals can be re-used, could help to solve an urgent raw material supply problem in the electronics industry. Researchers from the University of Leuven, Belgium, have used ionic liquids to separate neodymium and samarium from transition metals like iron, manganese and cobalt – all elements that are used in the construction of permanent rare-earth magnets, which are found in electronic devices ranging from hard drives to air conditioners and wind turbines.

‘The process involves the liquid-liquid extraction of rare-earth metals from the other elements present in neodymium-iron-boron and samarium-cobalt magnets,’ explains Koen Binnemans who leads the group developing the process. ‘These other elements – including iron, cobalt, manganese, copper and zinc – are extracted into the ionic-liquid phase, while the rare-earth metals are left behind in the aqueous phase,’ he says, adding that the ionic liquid itself – trihexyl(tetradecyl)phosphonium chloride – can also be re-used, after the transition metals have been stripped out.

In traditional liquid-liquid extractions of metal ions, an aqueous phase containing the metal salt is mixed with an organic phase containing an extraction agent. Simple though they are, these processes use organic phases comprising flammable and volatile solvents, like toluene, kerosene or diethyl ether. Ionic liquids are far more environmentally friendly, having very low vapour pressure and non-flammability.

Green Chemistry issue 4 is now online and you can read it here.

The cover features work by François Jérôme and co-workers from France.  Their Paper, ‘Pretreatment of microcrystalline cellulose by ultrasounds: effect of particle size in the heterogeneously-catalyzed hydrolysis of cellulose to glucose’ demonstrates that activity of a sulfonated carbon in the heterogeneously-catalyzed hydrolysis of cellulose was greatly improved by assistance of ultrasound. The paper demonstrates that the sonication method was as effective as conventional pre-treatments such as ball-milling or ionic liquids.

The inside front cover highlights a review article entitled ‘Green chemistry and the ocean-based biorefinery’ by Fran Kerton and co-workers at the Memorial University of Newfoundland in Canada.  This review highlights that competition for land use could be minimized if marine sourced feedstocks were used for chemicals and materials production rather than crops grown on fertile land. It focuses on achievements and potential opportunities surrounding the use of algae and waste from shellfish and finfish processing.

In January 1999 the first issue of Green Chemistry was published with an Editorial written by James Clark, setting out his vision for the Journal.

To mark the occasion of the Journal entering it’s fifteenth year of publication in 2013 we will be having a number of interesting articles asking those scientists who have contributed to the Journal strategy to reflect on how the subject has changed over the last 15 years and asking them for their vision on the subject in the future.

Details about all of these activities will be posted on the Green Chemistry blog throughout 2013. 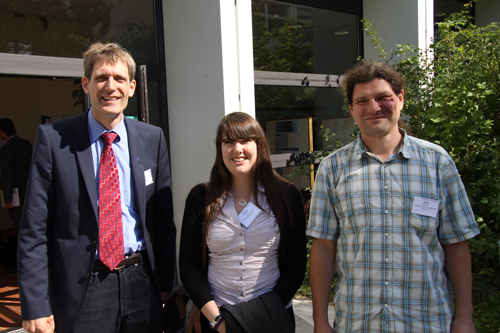 How synthetic organic chemistry can help to feed the world

Azoxystrobin is the world’s leading agricultural fungicide. It is a fully synthetic compound, whose invention was inspired by the structure and activity of the naturally-occurring fungicide strobilurin A. Today it is used worldwide to control fungi growing on over 120 types of crop, improving plant health, raising quality and increasing yield. The success of the project highlights the crucial importance of chemistry in meeting grand challenges such as global food security and the broader applicability of skills such as natural product synthesis. Keynote speaker Dr John Clough led the team of chemists at Syngenta that invented azoxystrobin. He will discuss the key role that synthetic organic chemistry played in creating an effective and safe fungicide. This policy event is organised by the Royal Society of Chemistry as part of a series of lectures designed to bring together active researchers and policy makers to highlight the role of the chemical sciences in tackling societal issues.

This event will be held in the Chemistry Centre on 26 September at the RSC’s recently refurbished building in Burlington House, London. Doors will open at 17:30 for refreshments. The event will begin at 18:00 and will finish with a wine reception. Please follow the link here for information and to register for the event.

If you cannot make it why not watch the video of the event which will be uploaded on the website after the event.

We are delighted to announce the appointment of Walter Leitner as the new Chair of the Green Chemistry Editorial Board.

Walter is a full professor at Technische Chemie und Petrolchemie, Institut für Technische Chemie und Makromolekulare Chemie at the RWTH Aachen University and has been involved in the development of the Journal through his role as Scientific Editor. We look forward to the start of a new era with Walter as Chair of the Green Chemistry Editorial Board.

The start of a new era must, unfortunately, see the end of another and after six years as Chair of the Editorial Board Martyn Poliakoff is stepping down.  Green Chemistry is privileged to have been guided by one of the most prominent green chemists and we wish to thank Martyn for all his hard work and endless enthusiasm he has brought to the Journal.  Martyn bids the journal farewell in a recently published editorial entitled ‘Paul Anastas and the Robin Hood Question’…
Intrigued? Find out more by reading the Editorial here.